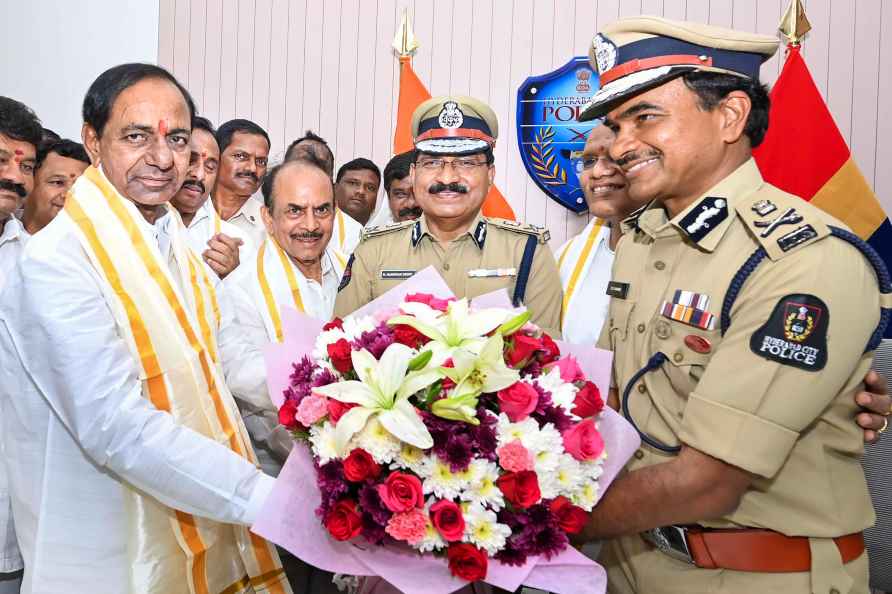 [Hyderabad: Telangana Chief Minister K Chandrashekhar Rao being welcomed at the inauguration of Command and Control Centre building of Telangana Police, in Hyderabad, Thursday, Aug. 4, 2022. ( /PTI] Hyderabad, Aug 4 : Hyderabad on Thursday added another landmark with the inauguration of the state-of-the-art world class Integrated Command and Control Centre of Telangana State Police. Built at a cost of Rs 600 crore, the iconic building has come up in upscale Banjara Hills in the heart of this technology hub whose landscape is already dotted with gleaming towers of several global IT giants. With the networking the functioning of various units of the police under a single roof, the facility serves as the nerve centre to tackle crisis like law and order problems, natural calamity or other disasters. The centre also has a helipad on the roof-top for emergency operations. This is claimed to be the first-of-kind facility in India and is modelled on the lines of command and control centres in New York and Chicago. Equipped with the latest technology, the Police Towers, as the centre is also called, will help police to further improve the monitoring mechanism and cut down the response time across the state. The footage from about 10 lakh CCTV cameras installed across the state can be monitored from this facility. With a built up space of 6.42 lakh square feet, the twin towers stand 272 feet tall and will also help in multi-agency operations for disaster management. Chief Minister K. Chandrasekhar Rao inaugurated the centre and offices of Hyderabad Police Commissioner, various wings of the police and a museum, showcasing the history of Telangana police. Accompanied by Home minister Mohammed Mehmood Ali, Director General of Police M. Mahender Reddy, Hyderabad Police Commissioner C. V. Anand, Chief Secretary Somesh Kumar and other top officials, the chief minister went around the building and witnessed technology demonstration. The centre comprises twin towers. Tower A, which is a 20-storeyed building has the Hyderabad City Police Commissionerate. Tower B has 15 storeys and it served as the 'Technology Fusion Tower' with all backups relating to Dial-100. Tower B will also have SHE safety, cyber and narcotics, crimes branches and incubation centre. The building, comprising five blocks, has chambers for the chief minister, home minister and DGP. When required, they can monitor the crisis situation from the war room and give necessary instructions to law enforcement agencies and other departments. The building also has a data centre equipped with the new technologies like Artificial Intelligence and Machine Learning for analytics in tackling the crimes. The centre has a 480-seater auditorium, a media and training centre. Officials of not just police but also other government departments can monitor the situation for disaster management. The building has parking space that can accommodate 600 four wheelers and 350 two-wheelers. No wooden furniture has been used in the centre. Officials said the furniture has been designed out of recycled material. About 35 per cent of the land has been allotted for plantation. The Police Command and Control Centre is a green building. With the glass facade, natural light allows the building to cut down on 50 per cent of energy consumption. Additionally, solar panels will generate up to 0.5 megawatts of electricity. /IANS

Global investors view Shehbaz's appeal as sign of imminent default on foreign debt
[Karachi: A Pakistani patient suffering from dengue fever, a mosquito-borne disease, is treated in an isolation ward, at a hospital in Karachi, Pakist

Chennai, Sep 23 : Strict measures are in place to retrieve a bronze idol of Kalasamhara Murthy of Sri Kasi Viswanatha temple at Muthamalapuram in Thanjavur from Christie's in the United States, the id […]

New Delhi, Sep 23 : The Supreme Court on Friday said it will list the pleas challenging the Centre's decision to abrogate the provisions of Article 370, which gave special status to Jammu and Kashmir, […]