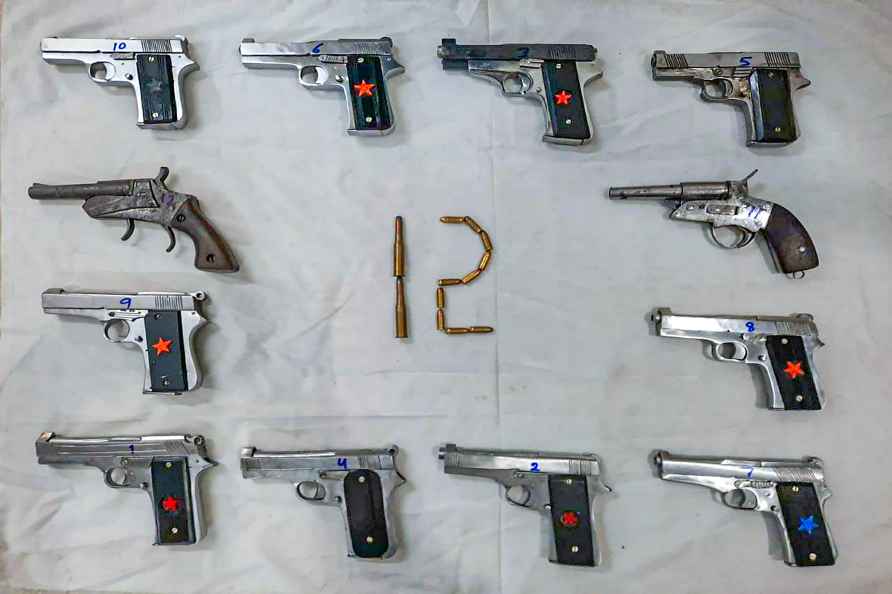 [**EDS: TWITTER IMAGE POSTED BY @CellDelhi ON THURSDAY, AUG. 4, 2022** New Delhi: Arms and ammunitions on display after the arrest of arms supplier Dhruv alias Pappi, in New Delhi. Twelve pistols and as many cartridges were recovered by officers of Delhi Police's special cell. ( /PTI] New Delhi, Aug 4 : Ahead of Independence Day, the Delhi Police Special Cell on Wednesday claimed to have arrested an arms supplier and recovered a huge cache of weapons from his possession. Twelve good quality pistols and live cartridges were recovered from Dhruv, alias Pappi, a resident of Rajasthan. During interrogation, the accused disclosed that he had supplied firearms to a gangster in Punjab. He also confessed to have supplied more than 400 firearms in Delhi-NCR. "Inspector Ishwar Singh and Satvinder under the supervision of ACP Attar Singh, has busted this interstate gun-running racket. The accused was held at Faridabad road near turning leading to Aali village Delhi. Pappi has been indulging in firearms trafficking in Delhi NCR, Punjab, Haryana and UP West for the last three years," said DCP Jasmeet Singh. The official said that the accused used to get supply of arms and ammunition from arms manufacturers-cum-supplier of Khargone Madhya Pradesh. He was previously involved in four cases of dacoity at gun point and one of arms trafficking pertaining to various police stations in Rajasthan, UP. A team of Special Cell had information about the illegal activities of arms trafficking in Delhi-NCR by Pappi in association with his associates. Manual surveillance was mounted to develop the information about him. Secret sources were deployed to gather information in this regard. Based on a specific information that Pappi would come to Faridabad Road near turning leading to Aali Village, Delhi to deliver the supply of firearms and ammunition to one his contacts in Delhi, a raiding party waylaid him. He was surrounded and overpowered. From the search of his bag, 12 pistols with 12 cartridges were recovered. A case under sections 25(8) of Arms (Amendment) Act was registered in this regard. /IANS

United Nations, Sep 14 : The 77th session of the UN General Assembly was declared open by its new President Csaba Korosi. In his opening remarks on Tuesday, UN Secretary-General Antonio Guterres […]

Not getting early wicket made it harder, but India batted brilliantly: Amy Jones

Derby, Sep 14 : England stand-in captain Amy Jones felt her team was unable to capitalise with the ball and credited India for chasing down a below-par 143 in the second T20I at Derby. Following […]