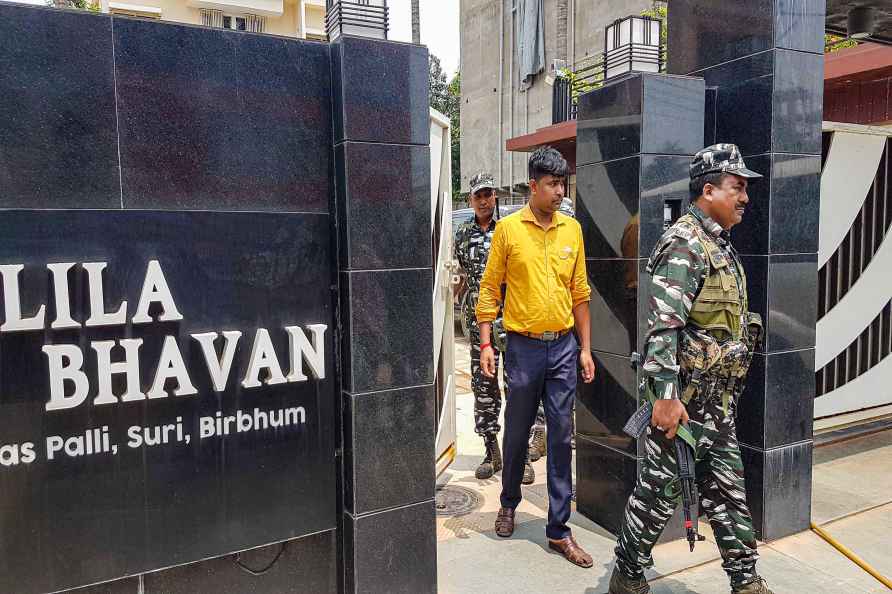 [Birbhum: Officials of Central Bureau of Investigation (CBI) leave after conducting a raid at the residence of stone merchant Tulu Mondal, a close aide of Trinamool Congress (TMC) Birbhum chief Anubrata Mondal, in connection with their investigation into an alleged cattle smuggling scam, in Birbhum, Wednesday, Aug. 3, 2022. ( /PTI] Kolkata, Aug 3 : Other than its ongoing probe into the multi-crore teacher recruitment scam in the West Bengal School Service Commission (WBSSC), the Enforcement Directorate (ED) is also focusing on the cattle smuggling case in the state. Since Wednesday morning, two teams of ED raided several places in Birbhum district in connection with the cattle smuggling case. The ED teams raided several places in Bolpur-Santiniketan as well as Birbhum district headquarters, Suri. Incidentally, Trinamool Congress' Birbhum district president and party strongman Anubrata Mondal is already under ED scanner and has been interrogated in connection with the cattle smuggling case. The ED sleuths raided the residence of local Trinamool leader and PWD in-charge of Birbhum Zila Parishad, Kerim Khan, as well as the residence of a local stone-quarry owner, Tudu Mondal. Kerim Khan is an accused in the case who's also under the radar of the Central Bureau of Investigation (CBI) because of his alleged involvement in a post-poll violence case in Bengal, in which Anubrata Mondal has also been questioned by the CBI sleuths. The ED sleuths also went to the residence of local Trinamool leader and owner of a rice-mill, Mukti Sheikh. All the three persons, whose houses were raided by the ED sleuths, are known to be close to Anubrata Mondal. Meanwhile, a third team of ED conducted search operations at a Bolpur-based mansion named 'APA', whose owner is WBSSC scam-tainted Partha Chatterjee's close associate, Arpita Mukherjee. The land for the house was purchased jointly in 2012 by Partha Chatterjee and Arpita Mukherjee for Rs 20 lakh. However, after the construction of the house, the mutation of the same mentioned only Arpita Mukherjee as the owner. The search operations are still on. /IANS

New Delhi, Sep 19 : The Congress was upset over "inappropriate tweets" of some BJP leaders on Rahul Gandhi and demanded action by the party. Addressing a press Conference here on Monday, party s […]

Parineeti Chopra: Back again to present myself in a whole new avatar

Mumbai, Sep 19 : Actress Parineeti Chopra, who is gearing up for the release of her next 'Code Name Tiranga', says she is back again to present herself in a new avatar that no one has seen her doing. […]

Pilibhit (UP), Sep 19 : A Dalit girl, who was allegedly gang-raped and set on fire by two men, succumbed to her injuries on Monday. The body will be handed over to her family after autopsy, said […]

Ben Kingsley on playing 'Salvador Dali' in 'Daliland': I love his fearlessness

Los Angeles, Sep 19 : Hollywood star Ben Kingsley shows a different side to his screen persona with his performance in 'Daliland', in which he plays the mercurial Surrealist artist in the last decade […]