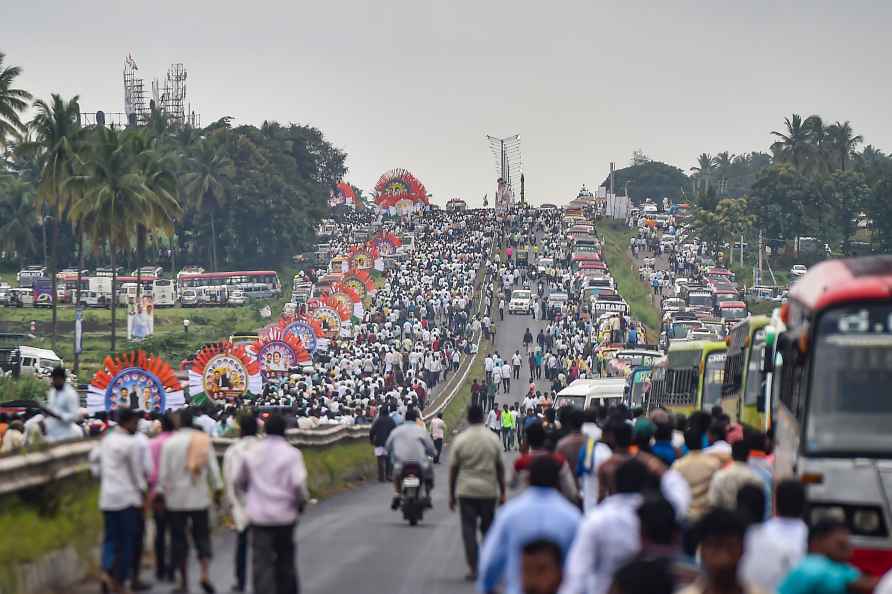 [Davangere: Congress workers and supporters arrive to take part in the 75th birthday celebrations of former Karnataka CM and Congress Legislature Party (CLP) leader Siddaramaiah, in Davangere, Karnataka, Wednesday, Aug. 3, 2022. ( /PTI] Davanagere, (Karnataka) Aug 3 : Congress leader Rahul Gandhi, who is in town to greet Opposition leader Siddaramaiah on his 75th birthday on Wednesday, was stuck in traffic briefly as lakhs of people descended on the roads for the celebrations in Davanagere district of the state. The Bengaluru-Pune is witnessing huge traffic jams in the stretch as people from across the state are reaching the venue. It is estimated that 4 lakh people are attending the celebration affecting the vehicular movement on the national highway severely. The stretch is also witnessing traffic jams up to 6 kilometers in the surrounding areas of Davanagere. Though party workers and authorities tried to create a freeway for Rahul Gandhi's convoy, due to heavy movement of people and vehicles, he was caught in the traffic jam. When his car was stopped, Congress workers ran towards his vehicle and tried to wish and talk to him. With the help of police, the organisers managed to clear the jam and make way for Rahul Gandhi's convoy. The platform of the function is spread across 42 acres and six platforms have been created out of which LED screens have been installed in five platforms. Rahul Gandhi arrived in Karnataka on Tuesday night to take part in the birthday celebrations of Siddaramaiah. Accordign to party sources, it is a rare phenomenon in Congress party where local leaders are glorified. The Gandhi family never allowed such celebrations and projection of leadership earlier. However, due to political compulsions the party has decided to celebrate the 75th birth anniversary of Siddaramaiah. /IANS

Gaurika Bishnoi gets a boost ahead of Women's Indian Open, moves up Order of Merit

Gurugram, Sep 23 : Gaurika Bishnoi ended a long title drought as she claimed the 13th Leg of the Hero Women's Pro Golf Tour at the DLF Golf & Country Club, Gurugram and moved up the Hero Order of Meri […]

[**EDS: STANDALONE FEATURE** Pulwama: A farmer carries harvested paddy in a field during harvest season, at Tral in Pulwama district of South Kashmir, Saturday, Sept. 24, 2022. The quality of the prod […]

Mumbai: A man takes a dip in the historic Banganga water tank as he pays homage to his ancestors through prayers and food offerings on the last day of 'Pitru Paksha', in Mumbai, Sunday, Sept. 25, 2022 […]

New Delhi, Sep 23 : The body of a man, appearing to be around 40 years old, was found in an underground water tank near Delhi's Connaught Place on Friday, police said. "A male dead body had been […]