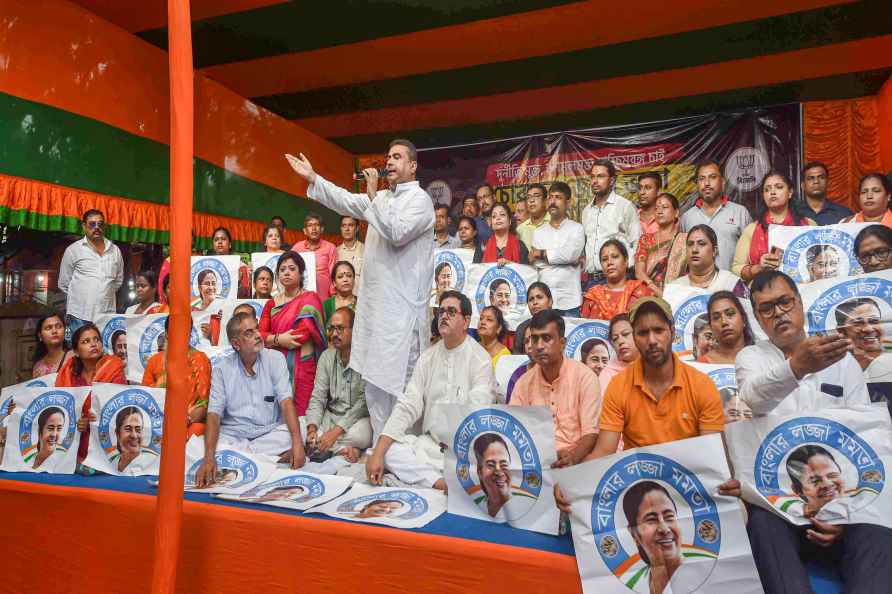 [Kolkata: Leader of the Opposition in the West Bengal Legislative Assembly Suvendu Adhikari addresses BJP workers during a protest over the alleged teacher recruitment scam, in Kolkata, Wednesday, Aug. 3, 2022. ( /PTI] Kolkata, Aug 3 : A PIL has been filed in the Calcutta High Court seeking immediate removal of Paresh Chandra Adhikari as minister of education, the department which is mired in controversy over the multi-crore teacher recruitment scam. The public interest litigation (PIL) was filed before the division bench of chief justice Prakash Srivastava and Justice Rajarshi Bhardwaj by a state BJP leader Pradipta Arjun. In his petition, the BJP has argued that following an earlier order of the Calcutta High Court's single judge bench Justice Abhijit Gangopadhyay, it has been proved beyond doubt that Adhikari misused his power to unethically to get his daughter Ankita Adhikari appointed as a higher secondary political science teacher illegally superseding another eligible candidate. He also argued that following the court order, Ankita Adhikari was dismissed from her services and also had to return the salary drawn by her during her tenure as the teachers at a higher secondary school in Cooch Behar district, where Paresh Chandra Adhikari is an MLA. The division bench has admitted the public interest litigation and the matter might come up for hearing on August 5. Meanwhile, former state education minister Partha Chatterjee has been stripped of all his ministerial berths after he was arrested by Enforcement Directorate (ED) officials on July 23 owing to his alleged involvement in the WBSSC recruitment irregularities scam. Trinamool Congress has also relieved him of his different party posts. Chatterjee has already claimed that he had been the victim of conspiracies. Chatterjee and his close associate Arpita Mukherjee will be presented at a special court of the Public Money Laundering Act (PMLA) on Wednesday afternoon, where ED is likely to seek extension of their custody. /IANS

New Delhi, Sep 20 : Leading cryptocurrency market maker Wintermute has lost $160 million in a hacking into its decentralised finance (DeFi) operation, the company's CEO said on Tuesday. In a twe […]

Chennai: India A player Kuldeep Sen reacts during the 1st unofficial One Day International (ODI) cricket match between India A and New Zealand A, at MA Chidambaram Stadium in Chennai, Thursday, Sept. […]