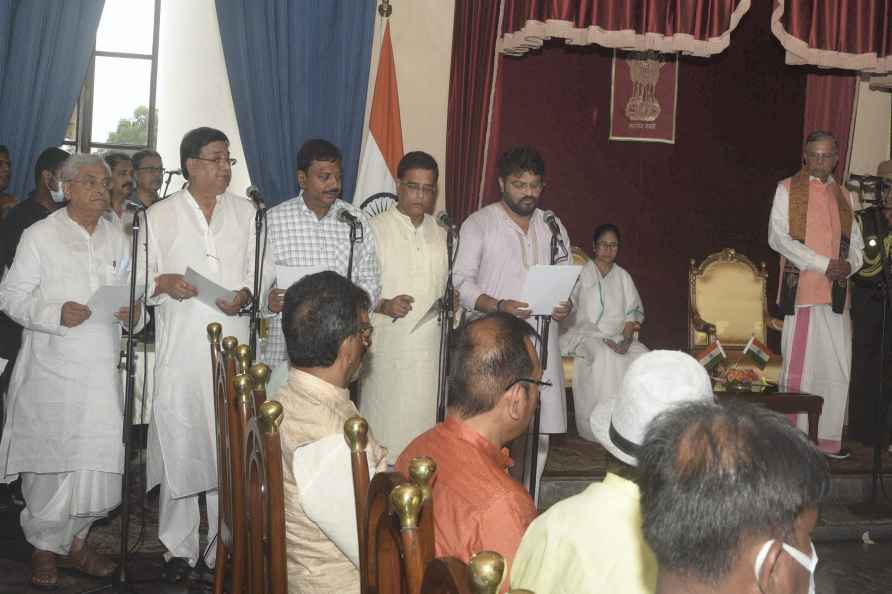 [**EDS: HANDOUT PHOTO MADE AVAILABLE FROM CMO (WB) ON WEDNESDAY, AUG. 3, 2022** Kolkata: Nine MLAs being administered the oath as Cabinet Ministers by West Bengal Governor La Ganesan in the presence of West Bengal Chief Minister and TMC chief Mamata Banerjee, in Kolkata. ( /PTI] Kolkata, Aug 3 : Nine new ministers were inducted in the Mamata Banerjee-led West Bengal government on Wednesday - five as cabinet ministers, two as ministers of states (independent charge) and two as ministers of state. However, till the report was filed, Chief Minister Mamata Banerjee is yet to announce the portfolios for these ministers. The five cabinet ministers who were sworn in by Governor La Ganeshan are Pradip Majumdar, Trinamool Congress MLA from Durgapur-East in West Burdwan district, Babul Supriyo from Ballygunge assembly constituency in Kolkata, Udayan Guha from Dinhata in Cooch Behar, Partha Bhowmik from Naihati in North 24 Parganas, and Snehasis Chakraborty from Jangipara in Hooghly district. Since the Trinamool came to power in West Bengal, Majumdar had been acting as the principal agriculture advisor to the state government. A person of extremely clean image, he is a close confidant of Banerjee. Singer-turned-politician Babul Supriyo was a two-time BJP Lok Sabha member from Asansol in West Burdwan district and was also a Union Minister in the Narendra Modi- led Union government. However, after the 2021 Bengal Assembly elections, he left the BJP and joined the Trinamool, and also resigned as MP. He later got elected in the by-polls to Ballygunge early this year. Santhali actress-turned-politician, Birbaha Hansda from Jhargram assembly constituency and Biplab Roy Chowdhury from Panskura-East in East Midnapore district were sown in as ministers of state (independent charge). Satyajit Burman from Hemtabad assembly constituency in North Dinajpur district and Tajmul Hossain from Harishchandrapur Assembly constituency in Melda district were sworn in as ministers of state. However, all eyes are now on the Chief Minister's announcement regarding the allocation of portfolios in her proposed cabinet reshuffle in which some existing heavyweight ministers might be relieved of their portfolios. /IANS

Mumbai: Union Finance Minister Nirmala Sitharaman launches a handbook on 'Banking and Finance' and another for 'MSME's on Exports' during the 'Laghu Udyog Bharati Maharashtra Adhiveshan', in Mumbai, F […]

Shillong, Sep 14 : Amid the strong opposition from various circles against the issuance of licences to operate casinos in Meghalaya, the state government has issued licences to set up three casinos in […]

Thoothukudi: DMK MP Kanimozhi distributes food to students, as part of ?Chief Minister's Breakfast Scheme? which was launched under Tamil Nadu government's mid-day meal scheme on Thursday, at a school […]