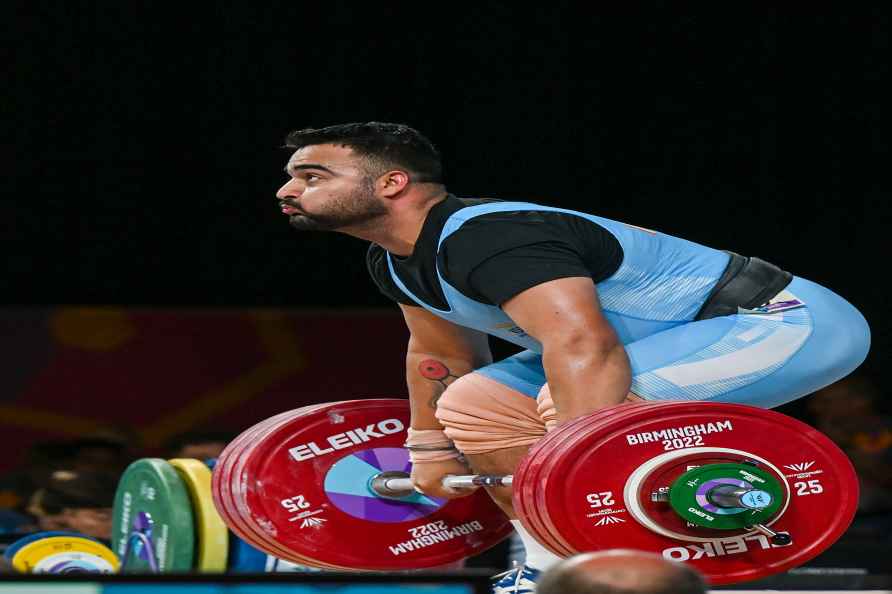 [Birmingham: India's Lovepreet Singh competes in the men's 109kg category weightlifting event at the Commonwealth Games 2022 (CWG), in Birmingham, UK, Wednesday, Aug. 3, 2022. ( /PTI] By B Shrikant Birmingham, Aug 3 : Heavyweight weightlifter Lovepreet Singh added to India's rich haul from weightlifting at the Commonwealth Games by claiming a bronze medal in the Men's 109 kg division at the National Exhibition Centre here on Wednesday. The 24-year-old Lovepreet Singh lifted 163 in snatch and added 192 kg in clean and jerk for a combined total of 355 kg, which put him behind Junior Periclex Ngadja Nyabeyeu of Cameroon, who had a total of 361 and Jack Hittila Opeloge of Samoa who had a total of 358. Though he had a clean series of lifts and succeeded in all six attempts, Lovepreet was totally conservative in his approach and worked with the aim of securing a bronze medal. This was India's ninth medal from the 2022 Commonwealth Games at Birmingham and the 14th medal overall, five gold, five silver and four bronze. /IANS

Shehbaz meets Biden at reception for world leaders in New York
[Palestinian President Mahmoud Abbas holds up a graphic showing the May 28, 2021 front page of The New York Times while addressing the 77th session of