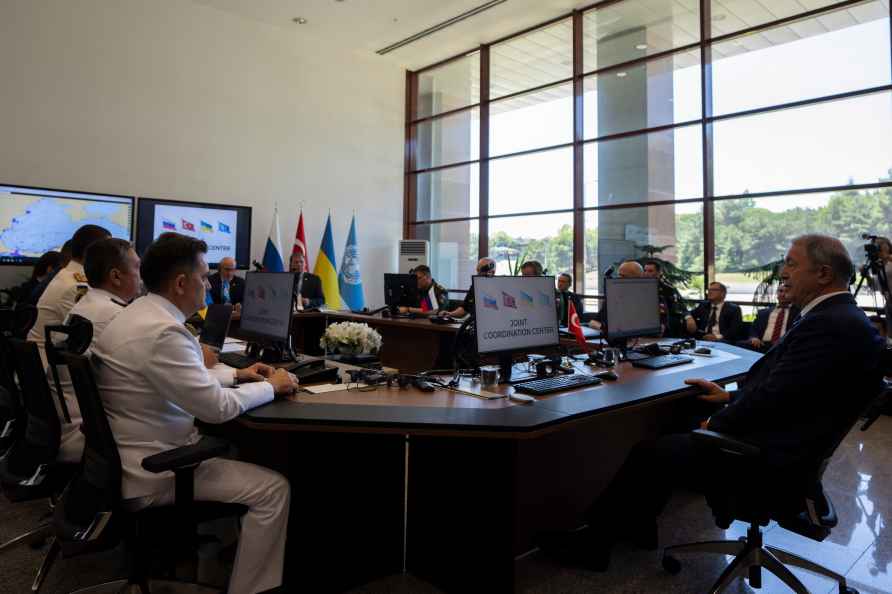 Kiev, Aug 1 : The first cargo ship carrying grain has left Ukraine's Odesa port in line with a grain exports deal signed between Kiev and Moscow last month in Istanbul, Infrastructure Minister Oleksandr Kubrakov said on Monday. The vessel Razoni under the flag of Sierra Leone carrying 26,000 tonnes of corn is bound for the port of Tripoli in Lebanon, Kubrakov wrote on Facebook. He said the ship will move along a maritime corridor, the security of which was guaranteed by Turkey and the UN, reports Xinhua news agency. The resumption of Ukraine's grain exports would help to prevent a global food crisis, contribute at least $1 billion to the Ukrainian economy and pave the way for the country's farmers to prepare for next year's sowing campaign, Kubrakov said. The cargo ship will first reach Istanbul or inspection on Tuesday, where it will be inspected by a joint monitoring centre according to an agreement that Russia and Ukraine made with Turkey and the UN, the Turkish Defense Ministry said in a statement Monday. Following Razoni, other convoys will set off from the port of Odesa, the Ministry added. Turkey inaugurated the Joint Coordination Centre in Istanbul last week to monitor the implementation of the grain shipment process. The centre consists of 20 representatives from Russia, Ukraine, Turkey and the UN, with five from each party. The Black Sea Grain Initiative, signed by Russia and Ukraine with TĂĽrkiye under the UN, would allow significant volumes of food and fertilizer exports from three key Ukrainian ports in the Black Sea, namely Odesa, Chernomorsk and Yuzhny. The deal aims to ensure the safe passage for ships carrying grain to world markets amid concerns about food shortages due to the ongoing Russia-Ukraine war. Russia and Ukraine are major global wheat suppliers. Ukrainian President Volodymyr Zelensky said the deal will enable his country to export 20 million tonnes of last year's grain harvest and part of this year's harvest. /IANS

Bengaluru, Sep 12 : Researchers at the Indian Institute of Science (IISc) and their collaborators have unravelled the real-time mechanism involved in biological processes like cell division, cell mobi […]

From left, the Earl of Snowden, Prince William, King Charles III, the Duke of Gloucester, Princess Anne and Prince Harry follow the coffin of Queen Elizabeth II as it is carried on a horse-drawn gun c […]