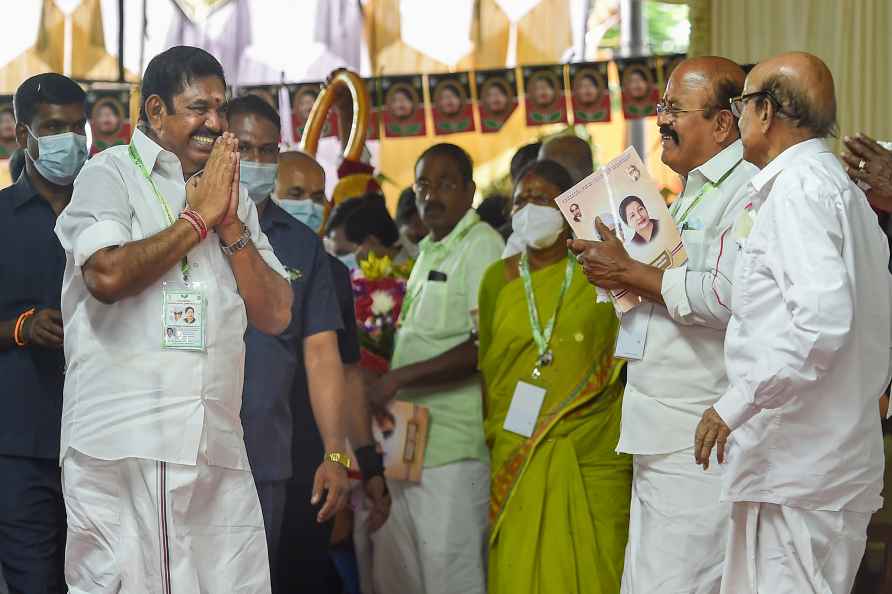 Chennai, Aug 1 : Political speculations are rife in Tamil Nadu after estranged interim general secretary of the AIADMK, V.K. Sasikala met senior party leader Panruti Ramachandran at his residence here. Panruti Ramachandran was a minister in the cabinet of M.G. Ramachandran. After meeting Sasikala, Panruti Ramachandran said: "It does not matter as to who the general secretary of the party is but on whom people are placing confidence." He also said that it was a question to be confabulated on what benefit the party had through a unitary leadership and was also dismissive of the selection of former Chief Minister, K. Palaniswami becoming the interim general secretary of the party. "All these interims are temporary and not permanent." In another political development, TTV Dhinakaran, Sasikala's nephew and general secretary of thr Amma Makkal Munnetra Kazhagam (AMMK), attended a programme of Panneerselvam's supporters at Theni. AIADMK leaders led by former Theni district secretary and close associate of Panneerselvam, Syed Khan gave a warm welcome to Dhinakaran leading to speculations that the AIADMK rebels and AMMK might work together. It may be noted that Syed Khan while being the district secretary of the AIADMK had passed a resolution in support of reinstating Sasikala into the AIADMK fold. The resolution was passed in a farmhouse owned by Panneerselvam. The meetings of Sasikala and Dhinakaran with some senior leaders of the AIADMK have raised speculations on the future alignments and realignments in AIADMK. In the July 11 general council meeting of the party that expelled Panneerselvam and his close associates and anointed Palaniswami as general secretary, the latter's faction had a brutal majority with 2,300 of the 2,400 members. Political observers however argue that the general council was an elected body and that it does not reflect the mood of the cadres. Dr. R. Padmanabhan, Director, Socio-Economic Development Foundation, a think tank based out of Madurai, told IANS: " The general council majority cannot be considered as a barometer for the popularity of a leader. If that was so, then the legendary Chief Minister of Tamil Nadu, late M.G. Ramachandran would have been in oblivion now. He was expelled from DMK with a brute majority in the general council. What happened, he floated AIADMK and it crushed DMK in the ensuing elections. Hence we can't fathom the popularity of a leader through general council, especially in regional political parties." With Sasikala and Dhinakaran meeting AIADMK leaders separately and fanning up support base, the possibilities of a realignment of forces in the opposition camp cannot be ruled out in the days to come. /IANS

**EDS: BEST QUALITY AVAILABLE** Pulwama: An injured undergoes treatment at a hospital after being shot at during a terrorist attack in Pulwama, Sept. 24, 2022. Two non-local labourers were shot. ( /PT […]

Very important for me to make my team champions in upcoming PKL season: Fazel Atrachali

Pune, Sep 23 : Puneri Paltan had a terrific Pro Kabaddi League auction when they signed Iranian Mohammad Esmaeil Nabibakhsh for a whopping Rs 87 Lakhs followed by his national side captain and star de […]

I feel my over lost the game for England; was a gamble on my part: Moeen Ali

Karachi, Sep 23 : Stand-in England captain Moeen Ali believes his over, which he admitted was a "gamble", played a pivotal role in his side losing to Pakistan by 10 wickets in the second T20I at the N […]