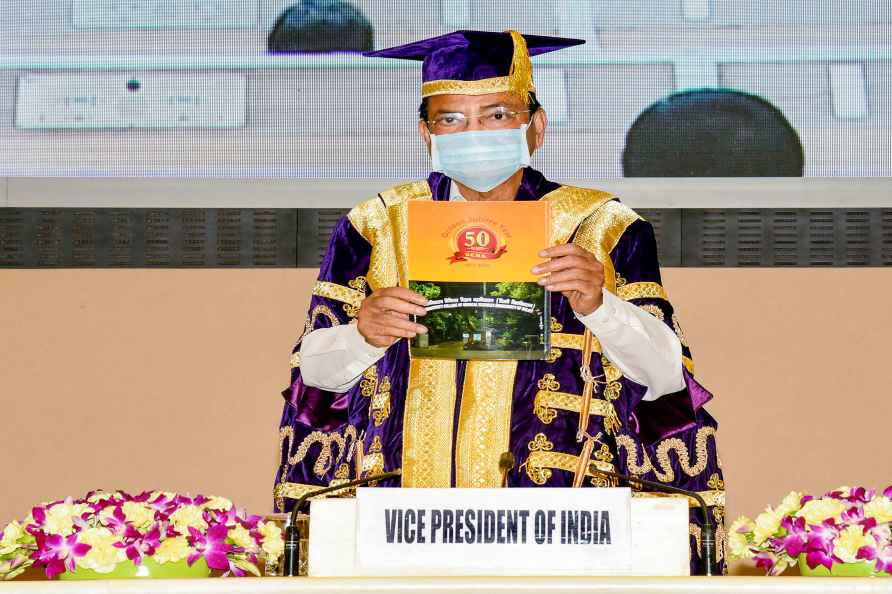 By Vishnu Makhijani New Delhi, July 18 : Growing up in a boarding school in the Himalayan foothills, Nachiket Chanchani, an art historian and associate professor at the University of Michigan in Ann Arbor, learnt a great deal about world history but precious little about the variegated past of the locale that he lived in, fuelling a hunger for more. "Hikes and pilgrimages to peaks and temples, and my parents' memories of nearly two years they spent in a montane (a biogeographic zone of relatively moist cool upland slopes) hamlet in the early 1980s only increased his desire to learn more about the sacred structures and steles (stone markers)," Chanchani told IANS in an interview. Eventually, he returned to the Uttarakhand region to undertake his doctoral dissertation research and to write 'Mountain Temples & Temple Mountains: Architecture, Religion, and Nature in the Central Himalayas' (Niyogi Books). Noting that the careful documenting and interpreting of stone temples and the sculptures enshrined therein "can give us a means of investigating the construction of sacrality", he said: "As part of my research, I created plans showing the orientation, scale, and disposition of parts of a selection of temples erected in the Central Himalayas as a basis for recognizing their morphologies." "Recognising the limitations of using an architectural terminology based on classical Graeco-Roman forms in describing Indian temples, I used a Sanskritic terminology where appropriate," he added. "Consideration of precise relationships between plans and elevations, external structures and internal systems, and original temple fabrics and later additions was also essential to my research. "In writing a history of sacred centers, I also drew on texts in multiple genres and various Indian languages: architectural treatises, autobiographies, ballads, courtly poetry, land grants, liturgical manuals, praises of places, pilgrim records and hagiographies of sovereigns, saints, and traders, among others," Chanchani elaborated. He took care to record geographical features that influenced the locations of sacred centers and movements of peoples, also factoring into his analysis questions of access, tracing traditional bridle paths connecting settlements to another as well as roads leading in and out of the mountain ranges. This "diachronic (study over time) dimension" of his work led him to consider the complex and layered pasts of medieval sites "and to try and gauge the way in which cultural expression and political movements of subsequent centuries" had evolved. For instance, "the manner in which the story of the Bhima Sila boulder has been used to enhance the sacrality of Kedarnath - which it tumbled toward but spared the Kedarnath temple (during the devastating 2013 floods) - shows the close linkage between temple architecture and landscape," Chanchani said. The outcome is a seminal work that explores the historical process of the emergence of the Central Himalayas as a 'deva bhumi' as involving dynamic interactions among varied communities living in the northern mountains and on the plains that lie to their south. These developments, which occurred approximately between the 3rd century BCE and the 12th century CE "were crucial in transforming this frontier into a major locus of Hindu pilgrimage", Chanchani explained. The author demonstrates that through their forms, locations, interactions with the natural environment within the socio-cultural-political context, the stone complexes effectively evoked mythic worlds, embedding historical memories in the topography and thus altering the symbolic significance of these mountains. He also draws parallels between religious locations in places such as Gujarat and certain Himalayan temples, comparing the temple architecture and its related linkages. During his research, Chanchani also discovered "numerous, almost-unknown places where individual temples or clusters lie forlorn and abandoned." "Baijnath village, in the heart of Kumaon, is a case in point. Mounds await excavation. Hundreds of exquisite medieval sculptures once enshrined in shrines and around the village have been securely locked up in government storerooms for years. They need to be contextualized and displayed to help visitors understand its complex history. "Temples at nearby Talihat, Bageshwar, Gadser, and Kot need to be conserved and accurate information about them needs to be elucidated in an accessible manner," Chanchani maintained. Across Uttarakhand, he said, the Directorate of Culture, the Archaeological Survey of India and other state agencies need to collaborate with diverse stakeholders to showcase the region's rich heritage. "More than twenty years have passed since the state's formation and Uttarakhand still does not have a state museum, let alone a museum or cultural interpretation center in every district. There is much work to do," he added. Chanchani and his wife, Jahnabi, have also co-authored a book on the 'Amarushataka and the Lives of Indian Love Poems' that focuses on a "sumptuous" seventeenth-century manuscript from Bundelkhand in the collection of Mumbai's Chhatrapati Shivaji Maharaj Vastu Sangrahalaya (formerly Prince of Wales Museum of Western India). Redacted around the seventh century CE, the 'Amarushataka' is a collection of one hundred love poems written in Sanskrit that has been admired by South Asian literary communities for more than a millennium. The book introduces readers to the putative organizers of this anthology, the lenses through which these poems have been read, amended, and deployed, and the contexts through which they became standardized and authoritative. "Our micro-study also considers visual recension and their roles in the vast transfers of cultural knowledge that transpired in the vernacular millennium. 'Amarushataka and the Lives of Indian Love Poems' proposes a new way to study South Asian literature and painting as media that jointly forged customs in their own right. In all these ways, this book provides a model for approaching the study of other beloved South Asian texts," Chanchani explained. What next? What's his next book going to be? "My next book, 'India's Composite Heritage' in a nutshell, strives to inculcate visual literacy among India's school-age children and their parents by teaching them how to interpret, recognize, appreciate and understand information presented through ensembles of buildings, objects, and symbols crafted in India over the ages," Chanchani concluded. (Vishnu Makhijani can be reached at vishnu.makhijani@ians.in) /IANS

Moscow library to unveil bust of Marathi writer Annabhau Sathe, the father of Dalit literature
By Quaid Najmi Mumbai, Sep 7 : In a unique honour, the Margarita Rudomino All-Russian State Library for Foreign Literature, Moscow, will unveil a b

Rare manuscripts at Telangana institute to get new life with Iran's help
Hyderabad, Sep 7 : Conservation and digitalisation of rare Urdu and Persian historical manuscripts at the Telangana State Archives and Research Instit

Mohenjo Daro may be removed from the world heritage list
Larkana (Pakistan), Sep 4 : Pakistan's Department of Archaeology has called for urgent attention towards conservation and restoration work at Mohenjo

New Delhi, Sep 12 : As per the National Health Accounts report released on Monday, the Total Health Expenditure (THE) on the country has been estimated Rs. 5,96,440 crores, which translates into 3.16 […]

Kolkata, Sep 12 : The ruling Trinamool Congress will move a motion in the assembly against the "hyperactive" drives by central agencies like the Central Bureau of Investigation and the Enforcement Dir […]

Bhubaneswar, Sep 12 : The Visakhapatnam-Kirandul passenger special train (No. 08551) has been derailed mid-way between Jeypore and Chatriput stations in Odisha, a railway official said. "After p […]