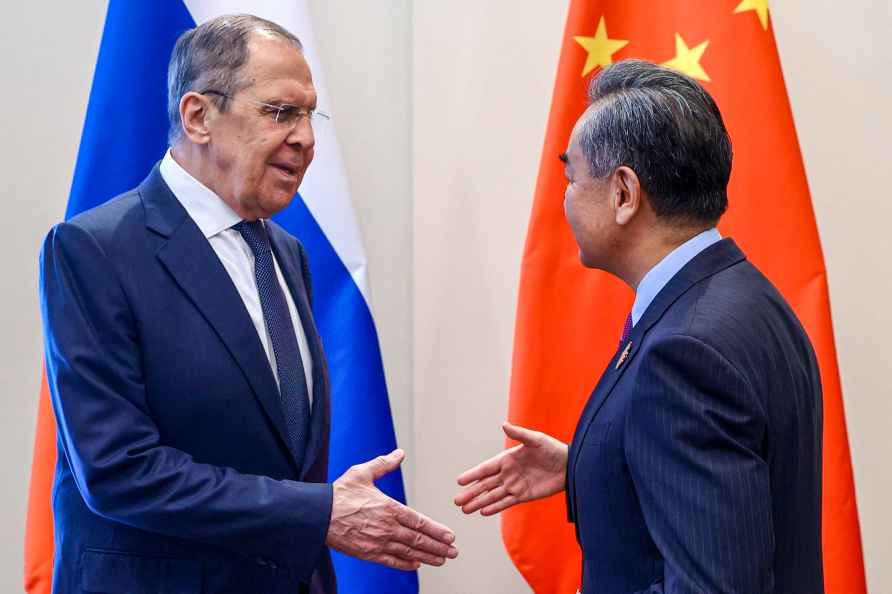 [In this handout photo released by Russian Foreign Ministry Press Service, Russian Foreign Minister Sergey Lavrov, left, and Chinese Foreign Minister Wang Yi gesture during their bilateral meeting ahead of the G20 Foreign Ministers' Meeting in Nusa Dua, Bali, Indonesia, Thursday, July 7, 2022. /PTI] Bali, July 7 : During his meeting with Chinese Foreign Minister Wang Yi here on Thursday, External Affairs Minister S. Jaishankar called for an early resolution of all the outstanding issues along the Line of Actual Control (LAC) in Eastern Ladakh. The two Ministers met on the sidelines of the two-day G20 Foreign Ministers' Meeting (FMM) currently underway in Bali. In a statement, the Ministry of External Affairs said that while recalling the disengagement achieved in some friction areas, Jaishankar "reiterated the need to sustain the momentum to complete disengagement from all the remaining areas to restore peace and tranquility in the border areas". He reaffirmed the importance of fully abiding by bilateral agreements and protocols, and the understandings reached during his previous conversations with his Chinese counterpart. "In this regard, both Ministers affirmed that the military and diplomatic officials of the two sides should continue maintaining regular contact and looked forward to the next round of Senior Commanders' meeting at an early date," the Ministry statement said. Jaishankar further reiterated that the relationship between India and China "is best served by observing the three mutuals -- mutual respect, mutual sensitivity and mutual interests". While recalling their previous meeting in New Delhi in March, the External Affairs Minister and Wang reviewed the progress of some key issues discussed then, including the return of students. Jaishankar "stressed the need for expediting the process and facilitating the return of students on an early date", said the Ministry statement. "The two Ministers also exchanged perspectives on other regional and global developments," the statement said adding that Wang also appreciated India's support during China's BRICS Chairship this year and assured Beijing's support for New Delhi's upcoming G20 and SCO Presidency. "They agreed to remain in touch." Following their meeting earlier in the day, Jaishankar had tweeted that the talks "focused on specific outstanding issues in our bilateral relationship pertaining to the border situation. Also spoke about other matters including students and flights". "Shared perspectives on the international situation and its impact on the G20 deliberations." According to the Ministry, Jaishakar is expected to hold several bilateral meetings with his counterparts from other G20 member states and invited nations on the sidelines of the FMM. /IANS

Washington, Aug 4 : US President Joe Biden is "still experiencing an occasional cough" after he tested positive for Covid-19 in a rebound case, his physician has said. The symptom is less freque […]