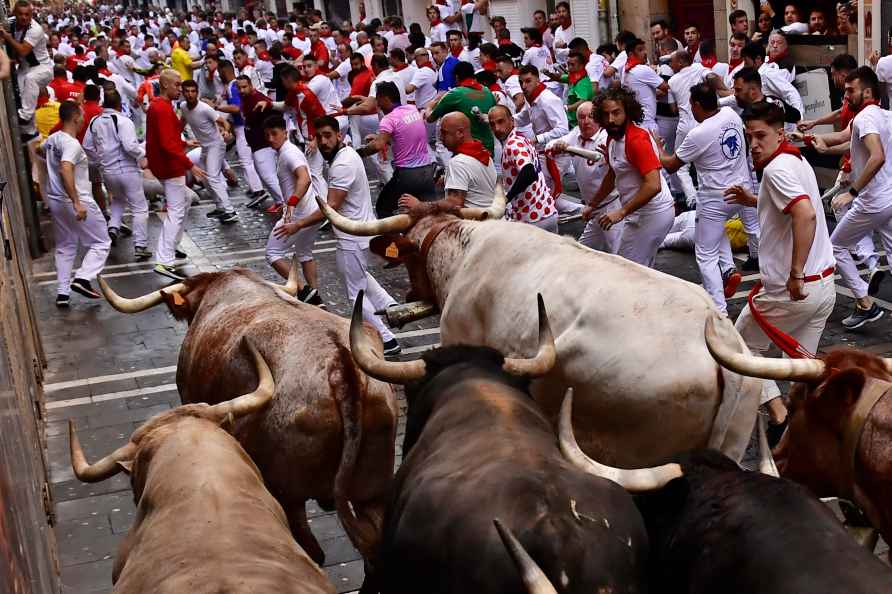 [People run through the streets with fighting bulls and steers during the first day of the running of the bulls at the San Fermin Festival in Pamplona, northern Spain, Thursday, July 7, 2022. Revelers from around the world flock to Pamplona every year for nine days of uninterrupted partying in Pamplona's famed running of the bulls festival which was suspended for the past two years because of the coronavirus pandemic. /PTI] Rome, July 7 : Rocco Morabito, one of Italy's most wanted fugitives and a drug kingpin, has been handed over to the country's authorities, extradited by Brazil after a long manhunt. Morabito, 55, would now serve a 30-year jail sentence he received after being declared guilty in absentia in Milan in the 1990s for international drug trafficking and mafia association, Italy's military Carabinieri police was quoted as saying by Xinhua news agency. Morabito is also known in Italy as "Milan's cocaine king" as he was a key figure in the 'Ndrangheta organized crime syndicate based in the country's Calabria region. "The person concerned, considered one of the top international drug traffickers, was in the list of most dangerous fugitives and was included in the Interior Ministry's Special Research Program," the Carabinieri said. Morabito was arrested in northeast Brazil in May 2021 as a result of a joint operation of Italian and Brazilian police forces assisted by the Interpol Cooperation Against 'Ndrangheta (I-CAN) project, the United States Drug Enforcement Administration (DEA) and the Federal Bureau of Investigation (FBI). Last week, Brazil's Supreme Court definitively authorized his extradition to Italy. The man had been on the run since 1994. He spent over two decades in South America under a fake identity. He was first arrested in Uruguay in 2017, yet less than two years later he escaped with three fellow inmates. The international police operation tracked him down last year in the Brazilian city of Joao Pessoa. He was arrested along with another key 'Ndrangheta mobster, Vincenzo Pasquino, who is serving a 17-year jail sentence for drug trafficking and mafia association. For the Italian authorities, the extradition of Morabito marks an important success in the fight against the country's three main mafia groups -- Sicilia's Cosa Nostra, Naples' Camorra and Calabria's 'Ndrangheta. /IANS

Paris, Aug 3 : Heatwave continues to hit most parts of France this week, triggering a drought alert in the wake of the driest July in more than 60 years, a French daily reported. Wednesday will […]

United Nations, Aug 3 : UN Secretary-General Antonio Guterres will start his Asia trip that will bring him to Japan, Mongolia and South Korea, his spokesman has said. The secretary-general will […]