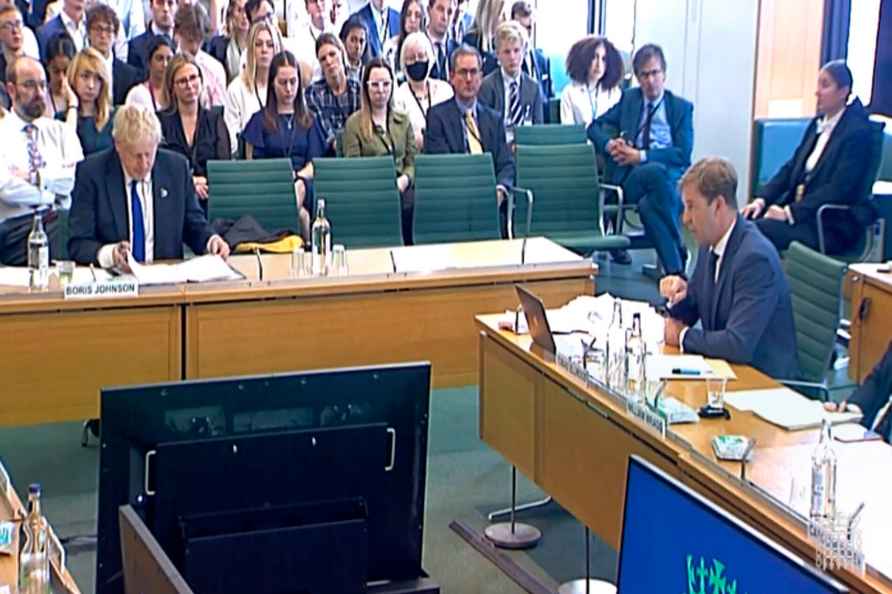 [In this grab taken from video from the House of Commons, Britain's Prime Minister Boris Johnson appears in front of the Liaison Committee in the House of Commons, London, Wednesday July 6, 2022. Johnson has insisted he is staying in his job despite a cascade of resignations from his government and a rapidly growing revolt within his Conservative ranks openly calling for him to quit. ( /PTI] By Ashis Ray London, July 6 : The governments of India and Pakistan may be at daggers drawn. But Indian and Pakistani origin senior cabinet ministers in the British government of Prime Minister Boris Johnson have combined to almost oust him from the job. Sajid Javid, Secretary of State for Health, and Rishi Sunak, Chancellor of the Exchequer, announced their resignations from the Cabinet within 10 minutes of each other on Tuesday to significantly deepen the 10-month crisis that's been brewing for Johnson because of alleged serial untruths and incompetence on his part. While both Javid and Sunak denied to have conspired to evict Johnson, BBC reported that the two had met over the weekend. On Wednesday, immediately after the leader of the opposition Labour party, Sir Keir Starmer, drove the knife into the Prime Minister in the weekly Prime Minister's Questions session in the House of Commons, Javid made a devastating personal statement about his resignation in the house - as is customary for an outgoing senior minister. He said: "I have concluded that the problem starts at the top and that it's not going to change. Enough is enough." "He made it clear in the bluntest of terms that he had been lied to over Partygate (the law-breaking parties at Johnson's office-cum-residence during the Covid-19 pandemic)," BBC wrote. The broadcaster described it as a 'rallying cry' to the members of Javid's ruling Conservative party. His fellow MPs listened to him in grim silence. Many even cheered him. Sunak did not directly accuse Johnson of impropriety in his letter of resignation. He instead highlighted ideological and policy differences, which sounded like him advocating fiscal prudence versus Johnson wanting to borrow and spend. Sunak stated: "I have always tried to compromise in order to deliver the things you want to achieve. On those occasions where I disagreed with you privately, I have supported you publicly." He, however, added: "Our people know that if something is too good to be true, then it's not true." Sunak mentioned in his correspondence: "The public rightly expect the government to be conducted properly, competently and seriously. I recognise this may be my last ministerial job, but I believe these standards are worth fighting for and that is why I am resigning." Unless Sunak has plans of quitting politics, few believe he will not be a minister again. Indeed, there is speculation that he is likely to be a candidate when Johnson is forced to step down - which now seems to be on the cards. Historically in the Conservative party, one who openly rebels doesn't generally become the successor. An apparent loyalist in the Cabinet or a former Cabinet minister presently in the backbenches does. Michael Heseltine went public in his opposition to Prime Minister Margaret Thatcher, but didn't replace her. John Major, who remained in the Cabinet, did. Other Cabinet ministers of Indian extraction in the British government have not said anything publicly. Priti Patel, who is the Home Secretary and widely seen to be standing up for Johnson, was reported to have expressed her continued allegiance to Johnson. But she was silent on record. 'COP 26' President Alok Sharma and Attorney General Suella Braverman's views are unknown. All three could potentially jump ship, although Patel's future under another Prime Minister could be in doubt, considering her controversial and inept performance in government. In the Palace of Westminster, which accommodates the Commons and the House of Lords, unofficial reports are rife that the '1922 Committee' of the Conservative Parliamentary Party, which conducts no confidence votes and leadership contests, is on the verge of informing Johnson that if he doesn't depart voluntarily, the committee will change its rules to hold another vote of confidence on him immediately. Under the existing rules, such votes cannot take place more than once a year. The last one occurred a month ago, thereby giving Johnson breathing space until next June. A vote next week Â? which is said to be the warning the committee could issue to Johnson Â? will almost certainly give rise to a majority casting their ballots against him. Thus, the Sunak-Javid 'jugalbandi' -- deliberately designed or not -- has, if not anything else, acted as a catalyst to hasten Johnson's exit. It is no longer if he will go, but when. /IANS