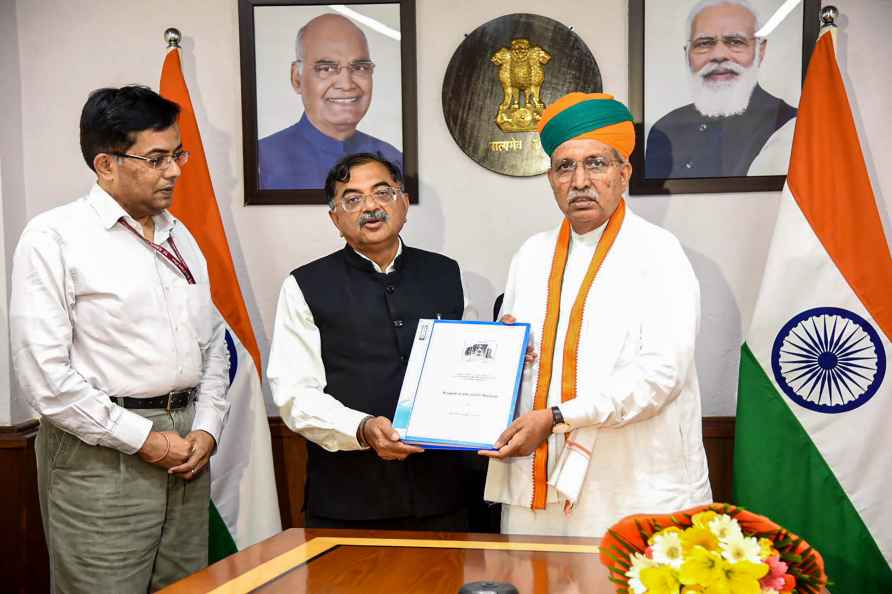 [**EDS: HANDOUT PHOTO MADE AVAILABLE FROM PIB ON WEDNESDAY, JULY 6, 2022** New Delhi: Union MoS for Parliamentary Affairs and Culture Arjun Ram Meghwal receives a report on declaring ?Mangarh hillock? as a monument of National Importance by the Chairman of National Monuments Authority(NMA) Tarun Vijay, in New Delhi. ( /PTI] United Nations, July 6 : The United Nations has called for partnerships in order to achieve the Sustainable Development Goals (SDGs), and champions optimism against all odds. Collen Kelapile, president of the UN Economic and Social Council (ECOSOC), said such partnerships can be harnessed to create a world of "peace and prosperity" that protects people and planet. Kelapile opened the in-person UN High-Level Political Forum on Sustainable Development (HLPF) "on a note characterised by high hope and optimism," arguing that "we can and shall overcome our challenges." The HLPF opened Tuesday to determine the best way forward to revive the SDGs. The eight-day forum, convened under the ECOSOC, "takes place as multiple crises around the world are putting the very viability of achieving the SDGs by 2030 at risk," according to a UN press release. Kelapile expounded on his optimism "against all odds," beginning with successes in controlling the COVID-19 pandemic, in many countries, Xinhua news agency reported. While acknowledging its detrimental effects on societies, people and the global development agenda, he said the pandemic has also "served as a wakeup call in exposing many aspects of our societies which were not right." Secondly, he pointed to the existing "blueprint to anchor our recovery," namely the 2030 Agenda for Sustainable Development and its 17 SDGs. Despite rising inflation, major supply-chain disruptions, policy uncertainties and unsustainable debt in developing countries -- all of which have slowed the global economy -- Kelapile cited the latest forecast in the World Economic Situation and Prospects for global growth of 3.1 per cent. He drew attention to the forum participants gathering with the common purpose "to renew our commitment to the 2030 Agenda... (and) agree on ways to deliver on the pledge we made in the 2019 SDG Summit, to accelerate action to implement the SDGs in the Decade of Action and Delivery." UN Deputy Secretary-General Amina Mohammed said that Voluntary National Review presentations, the process through which countries assess and present progress made toward implementing the 2030 Agenda, are now in their seventh year. "The 44 countries presenting this year will bring the total number that have presented to 187 -- meaning that we have achieved almost universal reporting," she said, commending all states which have taken part. The deputy UN chief noted "a stark illustration of the setbacks" wrought by the pandemic, conflicts, and the triple environmental crisis of climate change, biodiversity loss and pollution, which have impacted education, health care, gender equality, and the economy. However, she said that they also "offer hope" -- drawing attention to cash transfer programs, debt moratoriums for businesses, national resilience plans and government stimulus packages, which have brought "critical relief." "They signal countries' unwavering commitment to sustainable development in the face of ongoing and new crises," said Mohammed. Liu Zhenmin, under-secretary-general for Economic and Social Affairs (DESA), presented the secretary-general's SDG progress report along with another focusing on long-term future trends and scenarios, which takes stock of recent technological and policy trends as they impact the SDGs. He pointed out that compared to the pre-pandemic level, an additional 75 million to 95 million people will be pushed into extreme poverty in 2022. "The urgent need for international solidarity and multilateral cooperation cannot be stressed enough," said the DESA chief. In her remarks, Natalia Kanem, executive director of the UN Population Fund, called attention to how sexual and reproductive health and rights accelerate the SDGs. "The right to sexual and reproductive health -- to make decisions over one's own body and future -- is central to gender equity," she said. Meanwhile, Qu Dongyu, director-general of the Food and Agriculture Organization, highlighted the need to increase the resilience of agrifood systems against shocks to prevent the acceleration of global food insecurity. "We are at serious risk of facing a food access crisis now, and probably a food availability crisis for the next season," putting efforts at risk to achieve the global goals, he warned. The HLPF is the main UN platform on sustainable development, and has a central role in the follow-up and review of the 2030 Agenda for Sustainable Development and the SDGs at the global level. The theme of this year's forum is: "Building back better from the coronavirus disease (COVID-19) while advancing the full implementation of the 2030 Agenda for Sustainable Development." This year, the forum will review in depth Goal 4 on education, Goal 5 on gender equality, Goal 14 on life below water and Goal 15 on life on land as well as Goal 17 on partnerships for the goals. /IANS