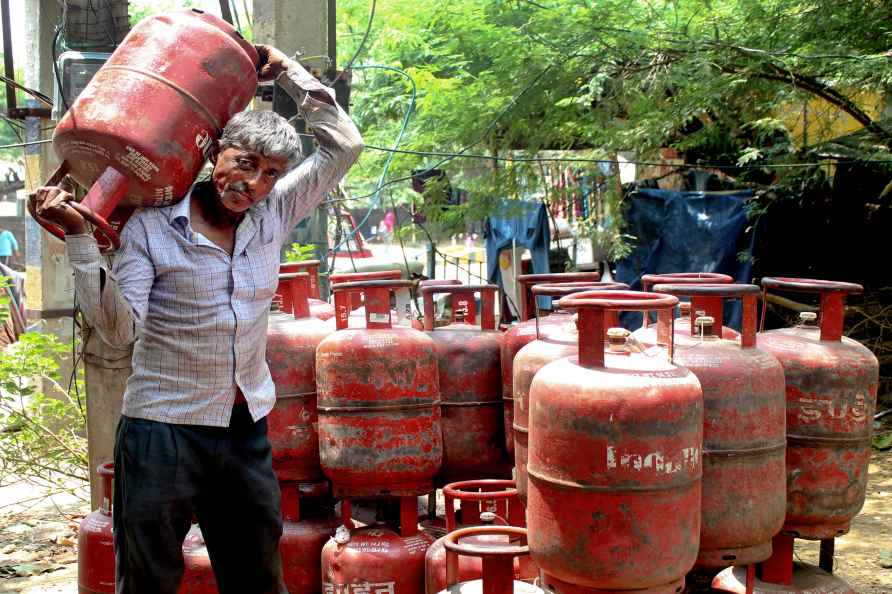 [Gurugram: A worker arranges LPG cylinders for their distribution, in Gurugram, Wednesday, July 6, 2022. The price of domestic Liquid Petroleum Gas (LPG) was Wednesday hiked by Rs 50 per cylinder for those weighing 14.2 kg. ( /PTI] Mumbai, July 6 : The Opposition Nationalist Congress Party (NCP) and the Congress on Wednesday attacked the Bharatiya Janata Party (BJP) government at the Centre for the steep hike of Rs 50 in the prices of LPG cooking gas cylinders, terming it as a "fallout" of the new government assuming power in Maharashtra. NCP Chief Spokesperson Mahesh Tapase said 50 MLAs from the Maha Vikas Aghadi (MVA) rebelled against the then Chief Minister Uddhav Thackeray and a week later, the cooking gas prices were increased by Rs 50. "The 50 MLAs were taken to Surat, flown to Guwahati and then to Goa, everywhere pampered in deluxe hotels... The 'invisible force' behind that operation to topple the MVA government must have cost a huge amount. Is there any connection between the 50 MLAs and Rs 50 spike in gas cylinder prices," Tapase asked. He also referred to the development as a consequence of the 'E.D.' government -- of Chief Minister Eknath Shinde and Deputy Chief Minister Devendra Fadnavis -- as pointed out by the latter (Eknath-Devendra) last week. In a sharp attack, Congress state President Nana Patole asked Prime Minister Narendra Modi how can the masses afford the huge hike of Rs 50 for domestic gas cylinders in the all round inflation. "The Modi government has a new slogan now - 'Na khaunga, Na pakaane doonga'. With the latest hike, the domestic gas cylinder prices have touched Rs 1,053," Patole pointed out. Tapase pointed out that barely 24 hours ago, Chief Minister Eknath Shinde had promised to reduce taxes on petrol-diesel and today, people got a shock when the BJP government hiked the gas cylinder prices, indicating that the reality is very different from perceptions. Patole recalled how, ever since the Modi regime came to power, the inflation graph has been rising and the government has "failed to control" the price rise. "Owing to the continuous price hikes, essential commodities have also gone out of reach of the common masses. In 2014 ,during the Congress-led UPA government, the gas cylinder cost Rs 450, ensuring the commoners were not hit by inflation," said the Congress chief, adding: "The subsidies extended by former Prime Minister Manmohan Singh have also been removed by the Modi government, and Indians are using the most expensive gas in the world." Claiming that it is impossible to get a new gas connection, Patole said it cost Rs 2,200, plus Rs 4,400 security deposit, regulator price has gone up by Rs 100, and then highly-priced monthly refill cylinders costing Rs 1,000-plus. Referring to the Centre's figures of 9-crore gas connections given under the Ujjwala Yojana, Patole demanded to know how many of those beneficiaries can afford the revised cylinder prices, and now they cannot go back to kerosene which has been stopped to them. "The economy is on downslide, the Indian Rupee falling daily against US Dollar, but the government has already looted the people of Rs 26 lakh crore on fuel taxes and filling its own coffers as the masses continue to suffer in the whirlpool of inflation," said Patole. The fresh increase in cooking gas prices has attracted severe flak even on the social media groups. /IANS