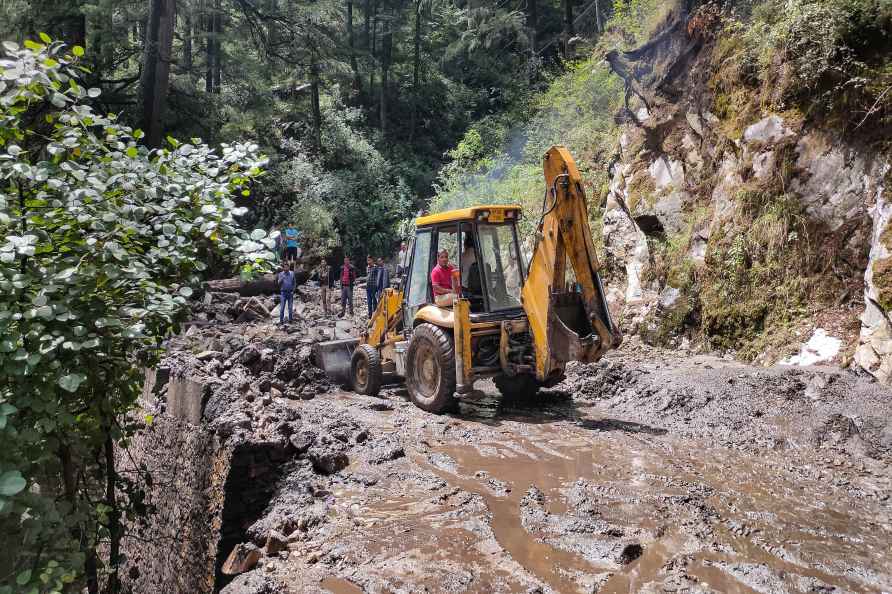 [Kullu: A worker uses a bulldozer to clear debris from a road, after a cloudburst at Parbati valley in Kullu district, Wednesday, July 6, 2022. At least seven people were feared dead in separate incidents triggered by heavy rains and flash floods in Himachal Pradesh's Kullu district. ( /PTI] Shimla, July 6 : A woman was killed while two others were injured due to landslides following heavy rain in the last 24 hours in Himachal Pradesh. Since Tuesday night, incidents of cloudbursts and landslides have been reported at many places in the state. Landslides occurred in Dhalli area of Shimla as incessant heavy rain continued late on Tuesday night. A young woman sleeping on the roadside was killed due to the landslide, while two others were injured. The injured are being treated at Indira Gandhi Medical College & Hospital (IGMC), Shimla. As per information, the girls, who are originally from Haryana, sold medicines on the roadside. The deceased has been identified as Kareena (14), while Asha (16) and Kulwinder (14) were injured in the landslide. A cloudburst was reported from Choj Nala in Manikaran Valley of Kullu district. According to eyewitnesses, property worth crores of rupees, including the bridge built in Choz village and the houses of the people, has been washed away in the rain. How much damage has been done or how many people have been washed away has not been estimated yet, there is still a flood situation in this area. The administration is waiting for the water to recede. NH 5 has been closed since morning due to a landslide near Broni nullah at Jhakri, following which the connectivity road to Kinnaur has been closed. A flash flood has also been reported in Thungi Khad in Morang, Kinnaur. At present, the administration is engaged in relief and rescue work. /IANS