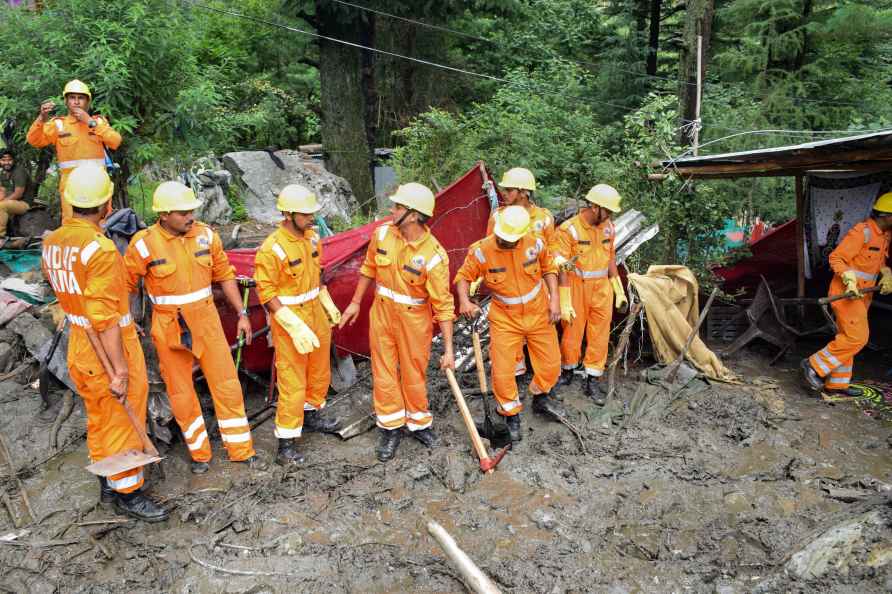 [Kullu: Rescue and relief operation, after a cloudburst at Parvati valley in Kullu district, Wednesday, July 6, 2022. At least seven people were feared dead in separate incidents triggered by heavy rains and cloudburst leading to flash floods in Himachal Pradesh's Kullu district. ( /PTI] Shimla, July 6 : At least four people washed away after a cloudburst in the Parvati Valley of Kullu district in Himachal Pradesh on Wednesday, damaging public and private property too. The cloudburst occurred at Chojh village in Challal panchayat in Kullu subdivision in which 4-6 people and five cows were washed away, a report by the state Disaster Management Authority said. It said the rescue team was on the way to the spot, but due to the landslide they were stuck on the Kasol-Jaimala road. Some camping sites were also washed away in the Kasol area with the flashflood triggered by overnight heavy rains. The bridge connecting to the village has been damaged. Six cafes located on the river bank were also washed away in the flood. /IANS

San Francisco, Aug 13 : A serious chemical leak accident forced the evacuation of more than 100 homes California's Perris city and also closed the 215 Freeway in both directions. Perris is locat […]

Anne Heche dies at 53, family says 'we have lost a bright light'

Los Angeles, Aug 13 : US actress Anne Heche is dead but will remain on life support to allow for a possible organ donation, her representative has said. The 53-year-old had been in a coma for a […]