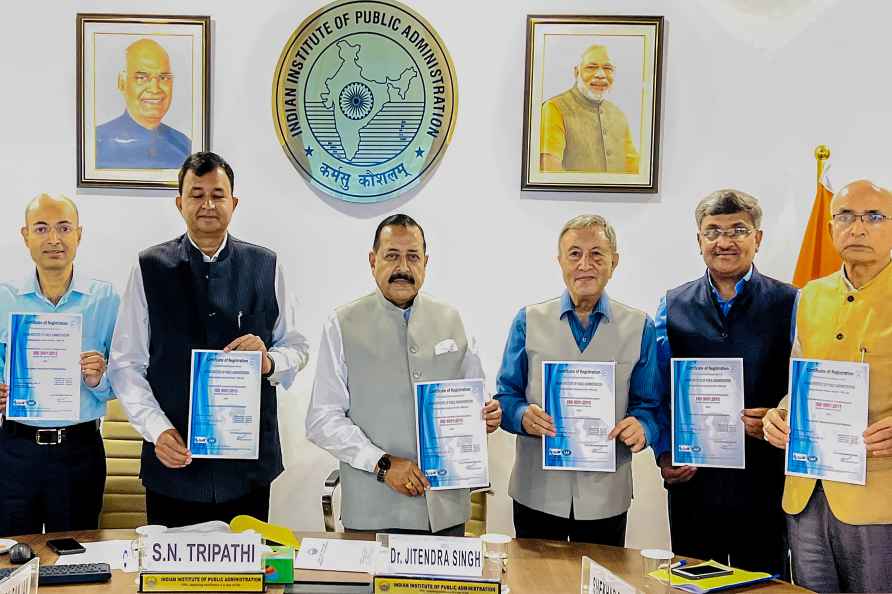 [**EDS: HANDOUT PHOTO MADE AVAILABLE FROM PIB ON TUESDAY, JULY 5, 2022** New Delhi: Union Minister of State for Science & Technology & Earth Sciences (I/C), Prime Minister?s Office, Personnel, Public Grievances & Pensions, Atomic Energy and Space Jitendra Singh releases the publication at the 320th meeting of the Executive Council as the Chairman of the Indian Institute of Public Administration (IIPA), in New Delh. ( /PTI] New Delhi, July 5 : In the first ever 'State Ranking Index' under the National Food Security Act (NFSA) released on Tuesday, Odisha has topped the list of general category states while Tripura topped the list of special category states. Odisha is followed by Uttar Pradesh, Andhra Pradesh and Gujarat in the general category states, while in the special category comprising the Northeastern states, Himalayan states, and Island regions, Tripura is followed by Himachal Pradesh, Sikkim and Nagaland. This ranking is generated by data provided by the states about their food and public distribution processes, vital for ensuring that no one goes hungry. The ranking, that is based on the food and security index, has been generated for the first time. A similar exercise would be carried out every year. It was released by Union Minister for Consumer Affairs, Food and Public Distribution, Piyush Goyal at the conference of Food Ministers on the theme of 'Food & Nutrition Security of India'. "The Index has been developed with the objectives of creating an environment of competition, cooperation, and learning among the states; states learning from each other their best practices while addressing grave matters of food security and hunger," Goyal said. The ranking will also help create transparency in the system to publish reliable and standard data in the public domain for citizens, the government said. The conference also saw presentations from multiple states on their best practices. Goyal lambasted the states that abstained from the conference, physically or virtually, and said: "It shows that the states are not serious about the important issue of food security." /IANS