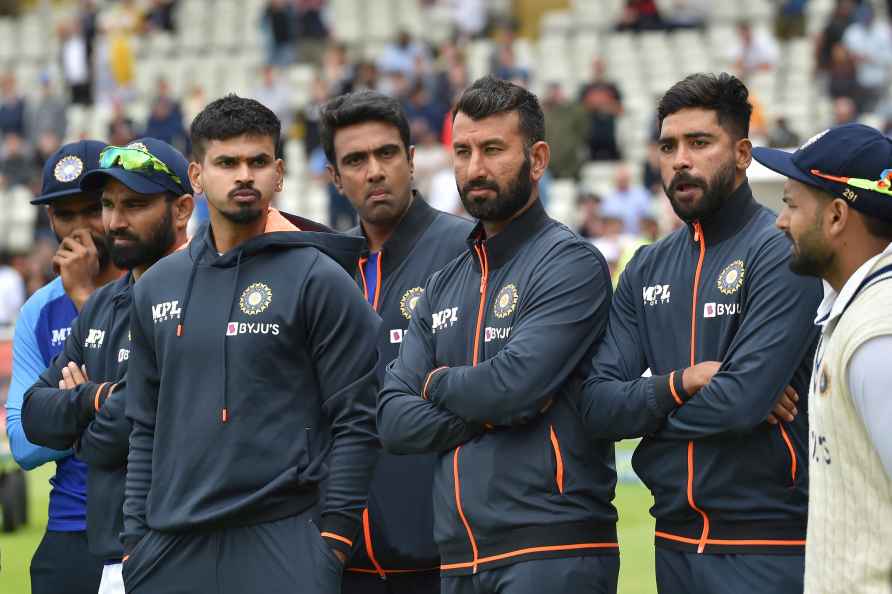 [Indian players attend the presentation ceremony after their loss on the fifth day of the fifth cricket test match against England at Edgbaston in Birmingham, England, Tuesday, July 5, 2022. /PTI] Birmingham, July 5 : Jasprit Bumrah, India's skipper in their seven-wicket loss to England in the rescheduled fifth Test at Edgbaston, admitted that the bowling attack couldn't come back quickly into the game with the ball and because of that, the momentum began to shift in England's favour. After dominating the match for nearly three days, bowling out England for 284 in the first innings, India set England a target of 378 in the second essay which the hosts easily chased with seven wickets in hand. Joe Root (142 not out) and Jonny Bairstow (114 not out) put up an unbeaten 269-run partnership to help them record their highest successful chase in Test cricket. Barring Bumrah, who took 2-74 in the second innings, no other Indian bowler could register his name in the wickets/ column in defence of 378. England's batting in the second innings made India's bowling line-up looks like a pedestrian attack and with visitors devoid of ideas to stop the Root-Bairstow combination, the chase became a stroll in the park for the visitors, successfully drawing the series 2-2. "I think yesterday we fell short with the bat and we had to come back quickly with the ball. I think that is the place where we let the opposition in and then the momentum just kept shifting away from us. We could have been a little straighter in our bowling lines and used the variable bounce" said Bumrah in the post-match presentation ceremony. Bumrah was adjudged as India's Player of the Series for picking 23 wickets in five matches at an average of 22.47, the most wickets by an Indian bowler in a Test series in England. Despite being on the losing side, he enjoyed leading India in Test cricket. "I won't go that far ahead (of calling himself an all-rounder). This is the beauty of Test cricket. Even if you have three good days, you have to keep coming and keep up the good performance. The captaincy is not what I decide. I like the responsibility. It was a good challenge, a new challenge. It was an honour to lead the team and a great experience." "Ifs and buts can always be there. If you go back, if there was no rain in the first match (at Trent Bridge), we could have won the series. But England played really well. We have drawn the series and both teams played very good cricket and it was a fair result." Bumrah signed off by praising Rishabh Pant and Ravindra Jadeja for their crucial centuries in the first innings score of 416. "Pant takes his chances. He and Jaddu got us back into the game with their counter-attack. We were ahead in the game. He takes his chances, backs himself, and very happy for him. (Rahul) Dravid is always there to guide us and back us." /IANS