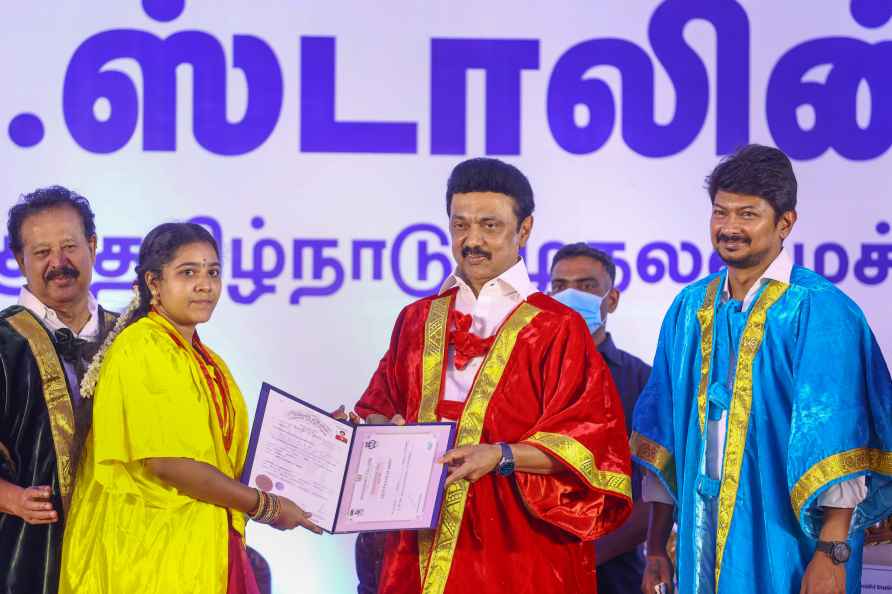 [Chennai: Tamil Nadu Chief Minister M K Stalin along with his son and DMK party's youth wing Secretary Udayanidhi Stalin and Higher Education Minister K. Ponmudi confers a degree to a student during the annual convocation of Presidency College (Autonomous), in Chennai, Tuesday, July 5, 2022. ( /PTI] Chennai, July 5 : Former interim general secretary of AIADMK and close aide of late Chief Minister J. Jayalalithaa, V.K. Sasikala is in the midst of a statewide tour to connect with the people, and is being viewed as a move to support O. Panneerselvam. The yatra, which commenced on June 26 and titled 'Puratchi payanam' (revolutionary journey) will be covering most parts of the state. Sasikala, who was expelled from the AIADMK, is using the party flag on her vehicle during the travel and is referring to herself as the party general secretary. She has fired the first shots by stating that the AIADMK bylaw states that the election of the general secretary should be through the voting of the primary members of the party and not through general council meeting as envisaged by the Edappadi K. Palaniswami faction. This statement of Sasikala is seen as an indirect move to garner support for O. Panneerselvam (OPS), who is fighting a battle wherein scales are weighed against him. The Thevar community of Tamil Nadu, to which both Sasikala and OPS belong, have played mediator between the two leaders. The Thevars are a powerful community of South Tamil Nadu and have always been a trusted vote bank for the AIADMK. In the recent urban local body elections, the AIADMK faced a drubbing in many Thevar strongholds, including Theni and Tirunelveli districts due to the community turning its back on the party. Caste plays a crucial role in Tamil politics and there is no surprise in the Thevars uniting for their fellow caste man, OPS against a Gounder, Edappadi K. Palaniswami. In another significant move, TTV Dhinakaran, general secretary of Amma Makkal Munnetra Kazhagam (AMMK) and the nephew of V.K. Sasikala has also embarked on a journey to meet cadres and leaders. While he maintains that he is connecting to his party workers and has nothing to do with the AIADMK, political pandits are of the opinion that both Sasikala and Dhinakaran are on a mission to bring the AIADMK back in their control. Dr. Venkitram, retired professor of Political science and Director of Kovai Centre For Political Research, a think tank based at Coimbatore while speaking to IANS said, "At present Edappadi K. Palaniswami is cruising along to take control of the AIADMK. But politics is the art of the possible and anything can happen and the yatras undertaken by both Sasikala and TTV Dhinakaran are to take control of the AIADMK by propping up O. Panneerselvam. Whether this move will materialise or not has to be seen in the days to come." With the AIADMK general council slated to be on July 11 and Palaniswami garnering maximum support, things are tough for Panneerselvam and his group. /IANS