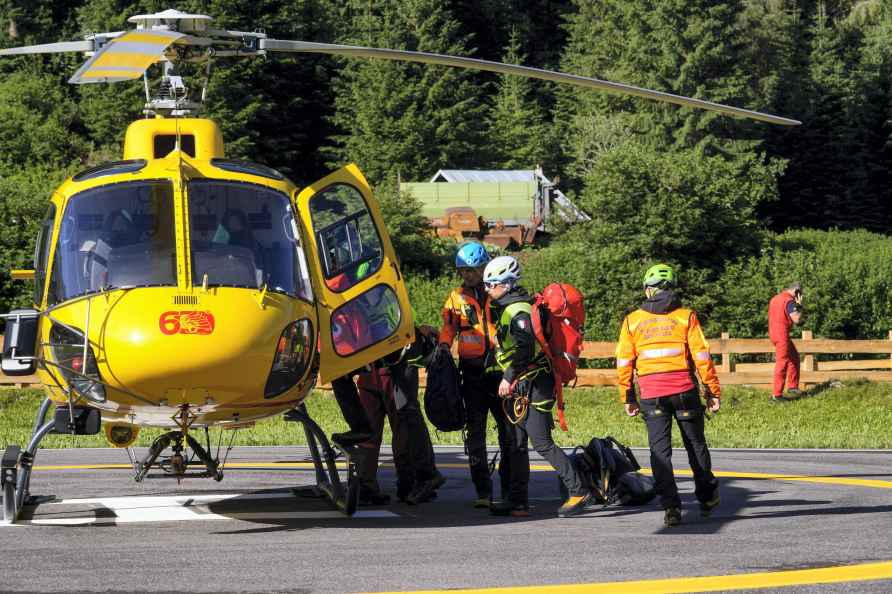 [Canazei: Rescuers prepare to conduct searches for the victims of the Punta Rocca glacier avalanche in Canazei, in the Italian Alps in northern Italy, Tuesday, July 5, 2022, two day after a huge chunk of the glacier broke loose, sending an avalanche of ice, snow, and rocks onto hikers. /PTI] Rome, July 5 : The death toll from a dramatic landslide caused by a melting glacier has climbed to seven a day after the tragedy in northern Italy, as rescuers continued to search for survivors. Italian Prime Minister Mario Draghi on Monday travelled to the area where at least seven hikers lost their lives after part of the Punta Rocca glacier, at the summit of the Marmolada in the Dolomite Mountains, collapsed on Sunday. This led to a massive landslide of ice, snow, and rock. Authorities have now discovered one more body, after the original death toll was announced on Sunday. Ten people were injured, two seriously, Xinhua news agency reported . The number of missing persons was reduced when officials from the region of Trentino reported that an Austrian hiker had been found. Nevertheless, 13 others are still missing. Officials have attributed the tragedy to scorching temperatures; when the glacier collapsed, the temperature at the mountain peak was reportedly around 10 degrees Celsius, when a normal temperature for this time of year is below zero. As of late Monday, officials said they continued to hope that more survivors would be found. Search efforts are now focused on the use of autonomous drones with heat sensors. /IANS