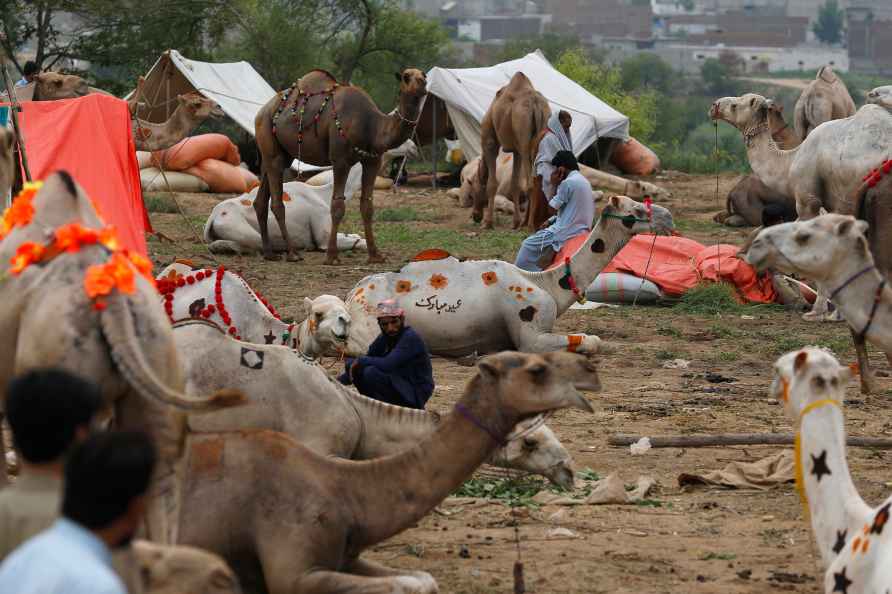 [Vendors wait for customers next to their camels decorated with colors and wording 'Eid Greeting' at a livestock market ahead of the Eid al-Adha holiday, on the outskirts of Islamabad, Pakistan, Monday, July 4, 2022. Eid al-Adha, the most important Islamic holiday, marks the willingness of the Prophet Ibrahim, Abraham to Christians and Jews, to sacrifice his son. During the holiday, which in most places lasts four days, Muslims slaughter sheep or cattle, distribute part of the meat to the poor. /PTI] New Delhi, July 4 : India is known for its unity in diversity. Though from time-to-time various external forces tried to disturb it, the larger, strong undertone of unity is integral to the culture of the country. As Bakri Eid is approaching on July 10, Muslim organisation Jamiat-Ulama-i-Hind (JUH) announced that it will send letters to mosques in India to ensure that no cow slaughter takes place as "it hurts the religious sentiments of our Hindu brothers". According to a report by Times of India, the move comes just days after clerics and scholars held a large convention in Deoband to discuss Muslim's issues along with sensitive subjects like Gyanvapi mosque, Mathura Eidgah, Uniform Civil Code and announced a 'Sadbhavana Manch' for communal harmony. The convenor of JUH's newly formed 'Sadbhavana Manch', Maulana Javed Siddiqui, said, "Our message will be issued in the form of a statement to every mosque during Friday prayers. Letters will be sent to imams in the country to speak on cow slaughter and that people should refrain from performing it this Eid." In another such glorious example of communal harmony, in a village called Khaderabad (now the Mylavaram dam) at Jammalamadugu, a small town in Kadapa district in Andhra Pradesh, Hindus and Muslims observe what may seem a strange religious practice. According to the traditional historical sources, or stalapurana, Hindus who visit this place initially offer prayers at a dargah of a Muslim saint Pir Gaibushah Vali located on a hill, before they offer their prayers to Lord Shiva, known here as Gurappa, reported The Deccan Herald. As per the local legend, once Lord Shiva in the human form rode a horse in this arid land, currently near Mylavaram dam, and became thirsty. Since there was not a drop of water in the barren land, a Muslim saint named Gaibushah residing and tending a herd of goats nearby, instantly slit the throat of a goat and quenched the lord's thirst with the animal's blood. The place where Lord Shiva quenched his thirst in his human form is now the sanctum for the mud Shivling. The sanctum has no roof but the mud linga does not get swept away even in the torrential rains. According to the Deccan Herald article the reverence the local Hindus have towards Gaibushah Vali is noteworthy. As if to continue his tradition, followers of Gurappa in the Jammalamadugu region offer animal sacrifice on several important occasions. The village is an important pilgrim centre for the Hindu as well as the Muslim devotees -- Hindus visit the dargah before worshipping Gurappa and Muslims venerate the Neem tree planted next to the dargah, a typical Hindu tradition. It stated that a glance at the annals of Indian history, it is an established fact that from the late 12th century onwards Muslim empires began to rise to authority throughout the subcontinent, the prominent ones being Delhi Sultanate and Mughals, who adopted local culture. They developed their own culture and traditions through intermarriages with natives. There were a few benevolent Muslim monarchs who upheld the values of the land and also ingrained efficient administrative system. The Muslim rule in India, which lasted for nearly 500 years until the British established their supremacy in Bengal after the Battle of Buxar in 1764, saw a major shift in the cultural, linguistic and religious makeup of the country as much as the European colonisers did. Therefore, whether it was the Muslim emperors or the British administrators, both had left their own imprints on the course of Indian history, the Deccan Herald report emphasised. /IANS

Undertrial killed in firing outside UP Court

Hapur, Aug 16 : In a shocking incident, some unidentified people opened fire at an undertrial just outside the Hapur court premises in Uttar Pradesh on Tuesday morning. The undertrial, Lakhanpal […]

By Vishal Gulati Shimla, Aug 16 : Heavy rainfall in Himachal Pradesh has increased the water level in the Bhakra and Pong dams, officials said on Tuesday. This time both the dams are brimming with […]