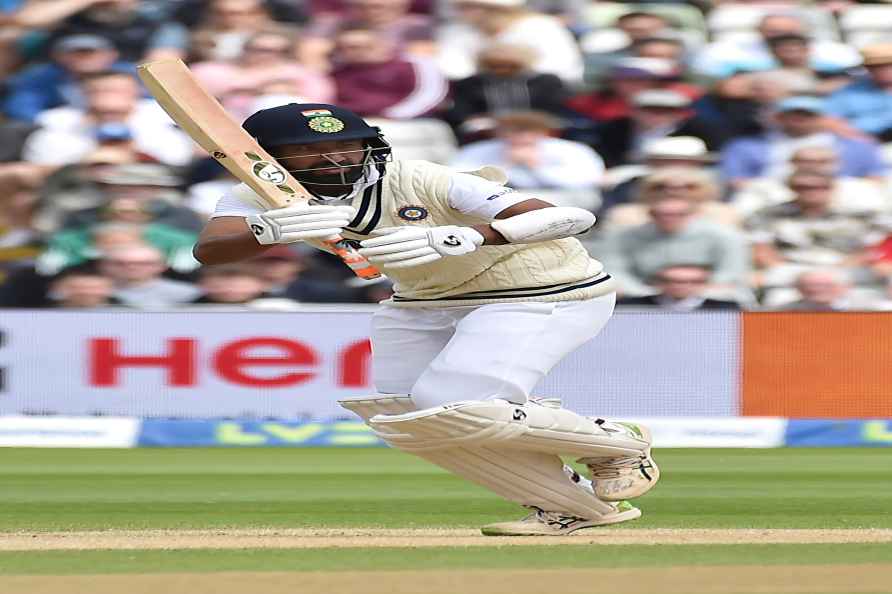 [India's Cheteshwar Pujara bats during the fourth day of the fifth cricket test match between England and India at Edgbaston in Birmingham, England, Monday, July 4, 2022. /PTI] Birmingham, July 4 : The day four of the rescheduled fifth Test between England and India on Monday is bound to give more clarity into how the result of the match will look like. With India, currently at 125/3 in the second innings, starting with a lead of 257 runs on Monday, former England captain Nasser Hussain reckons that the hosts are still very much in the game but if first-innings centurion Rishabh Pant stays on the crease for a few hours, then the match will be out of their grasp. "England are probably in a slightly more difficult place than they have been in the last three Tests (against New Zealand). The morning is going to be crucial. England are still in the game, but a couple of hours of Pant and that game will be taken away from them. I don't think there'll be a competitive declaration (from India), simply because they know England are going to come out whatever. So why would you declare?" said Hussain on Sky Sports. Former Sri Lanka cricketer Kumar Sangakkara had a different view over a potential declaration from India on day four. "I would like to see a declaration that gives England a chance to make a little bit of history. That would be great for the spectators and us lot up in the commentary box but, for sure, I think it will be a 400-plus lead for India (before they declare)." With Cheteshwar Pujara going strong after reaching his half-century on Sunday, Pant also looked solid to be unconquered on 30. Former England captain Michael Atherton cautioned the batters about dealing with the variable bounce, as some balls kept really low in the final session on Sunday. "It is a very good cricket pitch but we have seen the ball go up and down, which you would expect as you go through a Test match. You would hope as a bowling side that there is a little bit there. I think uneven bounce is the hardest thing for a batter to cope with. If the ball is swinging or spinning you can back your skill and technique but uneven bounce is very unpredictable and hard to put out of your mind." England, who were bowled out for 284 in the first innings, won't have just the Indian pace quartet of captain Jasprit Bumrah, Mohammed Shami, Mohammed Siraj and Shardul Thakur to worry about. Ex-India head coach Ravi Shastri backed left-arm spin all-rounder Ravindra Jadeja, who bowled only two overs in England's first innings, to play a huge role with the ball in the last innings of the match for India. "Jadeja will be a threat because he is accurate and not easy to get away. He will be at you all the time and because not every ball will spin that makes him more dangerous. If you know every ball is going to spin you adapt but when one spins and the next skids on, it gets even tougher." /IANS