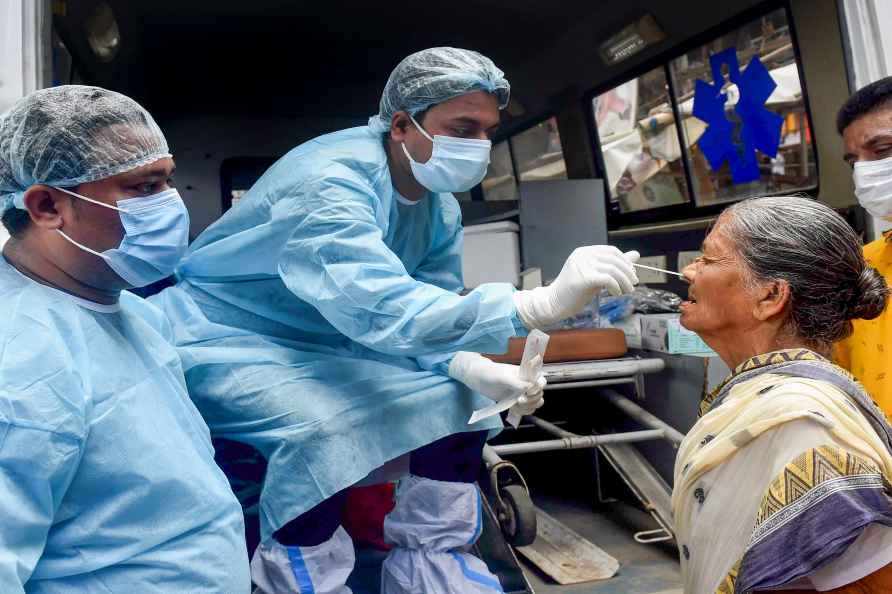 [Kolkata: A healthcare worker takes a swab sample of a woman for Covid-19 testing amid a surge in coronavirus cases, in Kolkata, Monday, July 4, 2022. India's active cases increased to 1,13,864, according to the Union Health Ministry data updated on Monday. ( /PTI] Rome, July 4 : The number of active Covid-19 cases in Italy has surpassed 1 million due to a rapid resurgence over the last two weeks. As recently as June 17, Italy had fewer than 575,000 active cases. On Sunday, that number totaled 1.01 million, an increase of more than 75 per cent in a span of 16 days, reports Xinhua news agency. The Ministry of Health has said the increases in the infection rate are mostly due to the Omicron-5 sub-variant of the virus. Italy became the fourth country in the world to have more than 1 million active cases, following the US (3.5 million), Germany, (1.5 million), and France (1.4 million), according to data from the World Health Organization. Eight of Italy's 21 regions and autonomous provinces are considered to be at high risk for the virus, with the remainder considered at moderate risk. The coronavirus transmission rate has been rising at a similar rate: the government reported on July 1 that the rate rose for the fourth consecutive week, reaching 1.30 over the most recent period up from 1.07 a week earlier. A rate above 1.0 means a disease is in a phase of expansion. The other main Covid indicators have also been on the rise in recent weeks, though not to the same extent as the infection rate and the transmission rate. Daily mortality figures remain below 100, totaling 57 on Sunday. The number of patients in intensive-care units, meanwhile, has inched higher, reaching 291 on Sunday, an increase of 16 from the day before. But those figures are less than a tenth of all-time highs set two years ago. The latest increases come despite Italy having a largely successful vaccine rollout. Government data shows that as of Sunday, 90.1 per cent of residents over the age of 12 had been fully vaccinated. A total of 96.6 per cent of those residents are either fully vaccinated or have recovered from Covid-19 in the last six months, a status seen as providing increased protection against the virus. /IANS

DW BUREAU / Chandigarh In response to a signal call made to 112 today, the State Emergency Response Centre (Haryana 112) has helped a rape victim to report the crime. Enumerating the detail […]

HPPC nod for purchase of goods worth Rs 1,000 crore