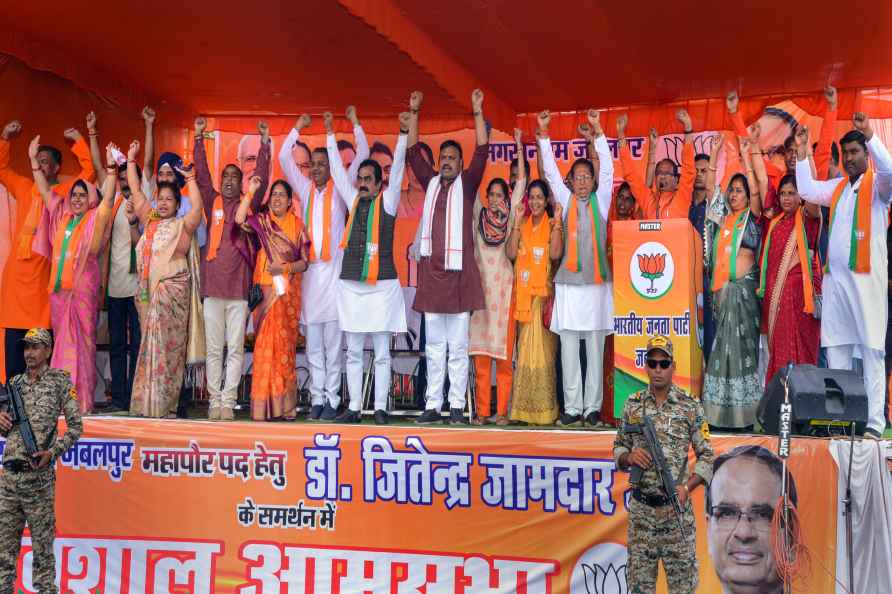 [Jabalpur: Madhya Pradesh Chief Minister Shivraj Singh Chouhan with BJP leaders during a public meeting ahead of the state local bodies elections, in Jabalpur, Sunday, July 3, 2022. ( /PTI] By Arun Lakshman Chennai, July 3 : With the main opposition in Tamil Nadu, the AIADMK facing tough times with an intense power struggle taking place, the ruling DMK is cruising along without much problems at the ground level. Since the 2019 general elections, the ruling DMK has been winning back to back elections -- the rural local body polls, then the 2021 assembly elections and the urban local body polls of 2022. The AIADMK stands vanquished after ruling the state from 2011 to 2021. The larger than life persona and shrewd political moves by the late J. Jayalalithaa had ensured that the AIADMK won back to back elections. However after the passing away of Jayalalithaa in December 2016, an intense power struggle commenced in the AIADMK with the former aide of Jayalalithaa, VK Sasikala and her family trying to take over the party. Sasikala was announced as the interim general secretary of the party and was on her way to assume the Chief Minister's post. A revolt broke out in the party with O. Panneerselvam, who is a fellow Thevar, opposing her move and sitting on a dharna near Jayalalithaa's memorial. Then, in a money laundering and disproportionate assets case, Sasikala was sentenced to four years in prison and the AIADMK got divided into two factions, one led by O. Panneerselvam and the other by Edappadi K. Palaniswami. Political moves at the highest level by the BJP bridged the differences between the two AIADMK leaders and Palaniswami became the chief minister of Tamil Nadu. Later with the AIADMK out of power and the party having a joint leadership of O. Panneerselvam and Palaniswami, the rift has widened between the two leaders. The BJP which is in a hurry to become a major force in the state is trying to widen the division between the two leaders. AIADMK organising secretary and former minister D. Jayakumar who is close to Palaniswami openly said that the BJP was trying to divide the party. Political analyst Mayulvahanan. R told IANS that, "This is the best period for the ruling DMK as the opposition in Tamil Nadu is totally divided. The BJP is trying to emerge as the main force in the state and is trying to cut the AIADMK to size. If the AIADMK does not stay together under a single leader, then it is almost certain that the opposition space will go to the BJP in Tamil Nadu even though it is not an easy proposition." With the AIADMK divided and no proper opposition in place in the state, the ruling DMK is having it easy. Another AIADMK ally Pattali Makkal Katchi (PMK) also announced that it was contesting on its own in the rural local body polls and later in the urban civic polls. /IANS

Gender inequalities are reducing, women are breaking many glass ceilings, "our daughters are the biggest hope for nation": President Murmu.

Gender inequalities are reducing, women are breaking many glass ceilings, "our daughters are the biggest hope for nation": President Murmu. […]

Keyword for India today is compassion for downtrodden, for needy and for those on margins: President Murmu.

Keyword for India today is compassion for downtrodden, for needy and for those on margins: President Murmu. […]