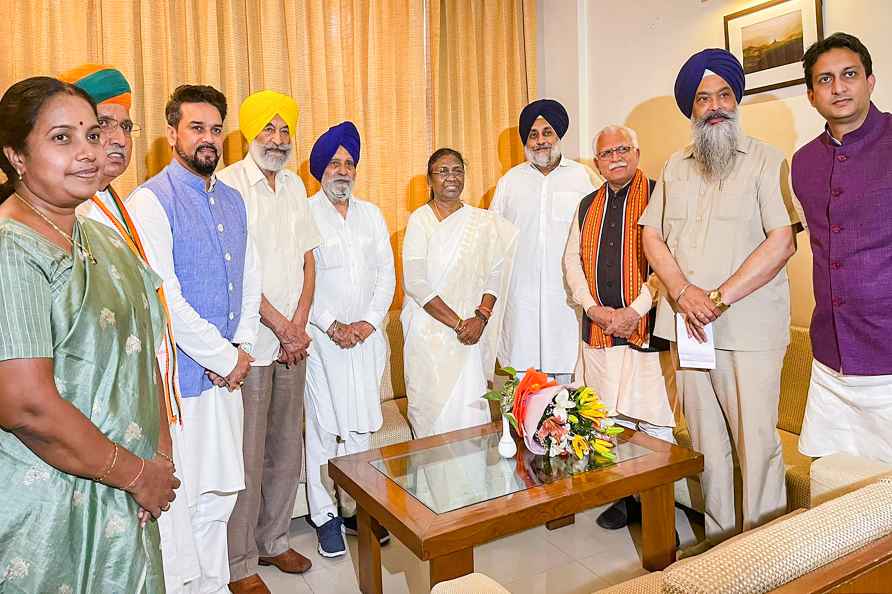 [**EDS: HANDOUT PHOTO MADE AVAILABLE FROM DIPR (HARYANA) ON FRIDAY, JULY 1, 2022** Chandigarh: NDA presidential candidate Draupadi Murmu with Union Ministers Anurag Thakur & Arjun Ram Meghwal, and Haryana Chief Minister Manohar Lal Khattar meets Shiromani Akali Dal President Sukhbir Singh Badal and other leaders. ( /PTI] Chandigarh, July 1 : The Shiromani Akali Dal (SAD) on Friday decided to support NDA candidate Draupadi Murmu in the forthcoming presidential poll "as she symbolises the cause of minorities, the exploited and backward classes as well as the women and has emerged as a symbol of the poor and tribal segments in the country". "While our serious reservations with the BJP over the prevailing atmosphere of mounting divisive and communal polarisation, especially the growing insecurity in the minds of the members of the minority communities, under the NDA government remains strongly intact, SAD is eventually inspired and guided by the ideals placed before humanity in supporting Murmu as she not only symbolises the dignity of womenfolk but also belongs to the downtrodden," said a resolution passed by the core committee of the party. Giving details of the meeting, SAD President Sukhbir Singh Badal told the media here the party was also concerned over the dangers posed to human rights, especially to the democratic values like religious tolerance and freedom of speech. "The party will never swerve from its core pro-Punjab, pro-minority, pro-farmers and pro-poor agenda. But in the presidential poll in question, the options before the party is either to support the candidate sponsored and supported by the Congress and its direct and indirect allies, or to be led by its conviction based on the ideals of great guru 'sahiban'. We have chosen to go by the latter," he said. Badal also highlighted that several issues related to the Sikh community and Punjab remained unresolved and that the party was committed to doing its utmost to ensure they reached their logical conclusion. He said these included securing the release of all Sikh detenues whose sentences had been commuted by the Central government on the occasion of 550th Prakash Purb of Guru Nanak Dev, handing over Chandigarh to Punjab as well as other issues like ensuring the status of Panjab University was not changed. The SAD President, who also met Murmu here along with senior party members, offered the support of SAD to her. He informed Murmu, who had earlier rung up the SAD President to seek support of her candidature, that the party's core committee had taken a unanimous decision to support her. /IANS