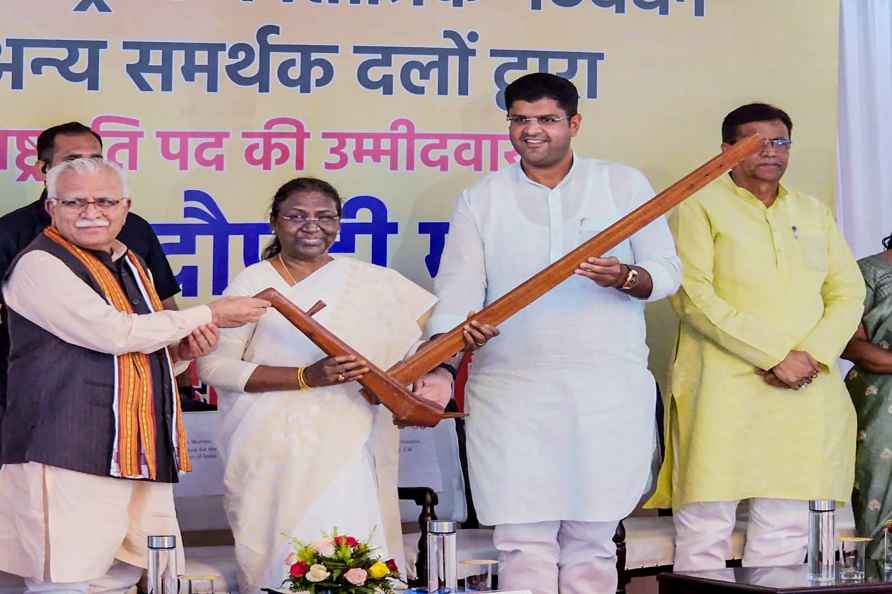 [Chandigarh: NDA Presidential candidate Draupadi Murmu with Haryana Chief Minister Manohar Lal and Deputy Chief Minister Dushyant Chautala during a programme at the Haryana Niwas, in Chandigarh, Friday, July 1, 2022. ( /PTI] Thiruvananthapuram, July 1 : The Kerala unit of the Janata Dal (S) has apparently run into a spot of bother, after its national leadership decided to support the NDA presidential candidate Draupadi Murmu. Karnataka Chief Minister H.D. Kumaraswamy had indicated that the JD (S) would back Murmu, leaving the Kerala unit in trouble. In Kerala, the JD (S) has two legislators in the 140-member Kerala Assembly and is an ally of the Pinarayi Vijayan-led government. Its nominee K.Krishnankutty is a cabinet minister holding the portfolio of Electricity. State supremo of the JD (S) in Kerala is Mathew T.Thomas, also a legislator, and he has said that there is no confusion on whom to vote and will announce the decision after speaking with the party's national leadership. It's certain that the two-member JD (S) will be voting for the joint opposition candidate Yashwant Sinha, as any aberration in it would be very costly for them as both the ruling Left and the Congress-led opposition would be voting for Sinha. In Kerala, the BJP-led NDA has no representation in the Kerala Assembly. /IANS

New Delhi: National flags attached to rickshaws as part of 'Azadi Ka Amrit Mahotsav' celebrations, on the eve of the 75th anniversary of Independence Day, near the Red Fort in New Delhi, Sunday, Aug. […]

Thiruvananthapuram, Aug 13 : Even as Kerala Governor Arif Mohammed Khan has asked Kannur University Vice-Chancellor for a report on alleged irregularity in the appointment of the wife of Chief Ministe […]