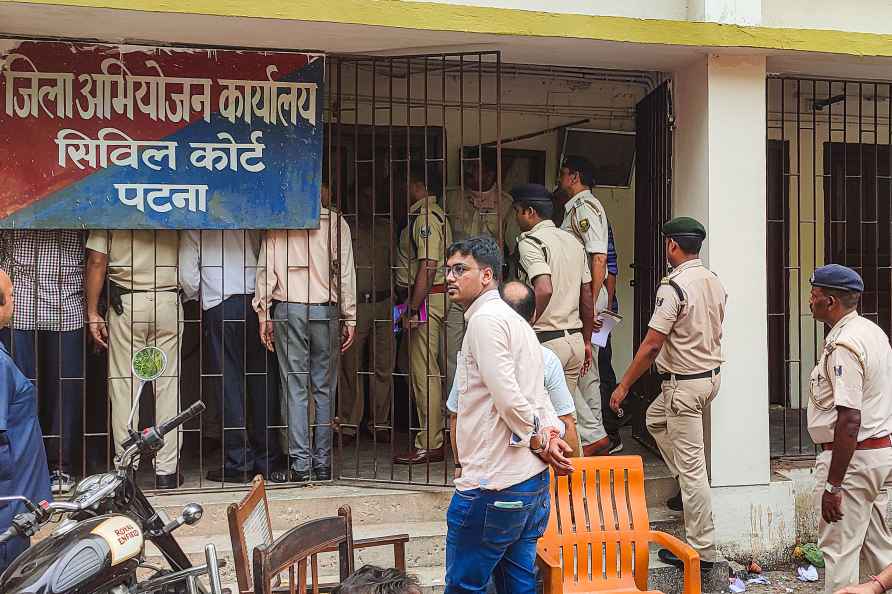 [Patna: Security personnel investigate after a crude bomb exploded inside the Civil Court premises, in Patna, Friday, July 01, 2022. A police officer who had brought the explosive for investigation purpose got injured in the explosion. ( /PTI] Patna, July 1 : Three policemen were seriously injured after a bomb, produced as evidence, exploded in a Patna court on Friday afternoon. Patna police recovered the bombs recently from a hostel and brought them to the civil court to present before the judge as a proof against the accused. However, the bomb exploded soon after it was put on a table in the court. Sub-Inspector Umakant Rai and two other personnel of Agam Kuan police station were injured in this incident as they were in close proximity. The impact of the explosion was such that many officials and lawyers present in the court lost their hearing for a few minutes. The judge was also present in the court but managed to return to his chamber safely. Following the explosion, SSP Manavjeet Singh Dhillon and officials of Pirbahore police station reached the court and sealed the area. The dog squad and bomb squad immediately reached in the court, along with forensic experts, and started the investigation. The Patna police has not given an official statement about the incident so far. /IANS

God dragged in again as Goa councillors defy principle laid down by CM
[Roma: Ballot papers voted by Italians living in Europe, Russia, and Turkey are prepared for the final count in Bologna, Italy, Sunday, Sept. 25, 2022

Over 11K flats to be handed over to Amrapali home buyers in 2-3 months, SC told

Surat, Sep 23 : Top seed G Sathiyan was the highest ranked player standing between Gujarat's hopes of bagging the top two spots in men's singles after second seed A Sharath Kamal had to retire from hi […]