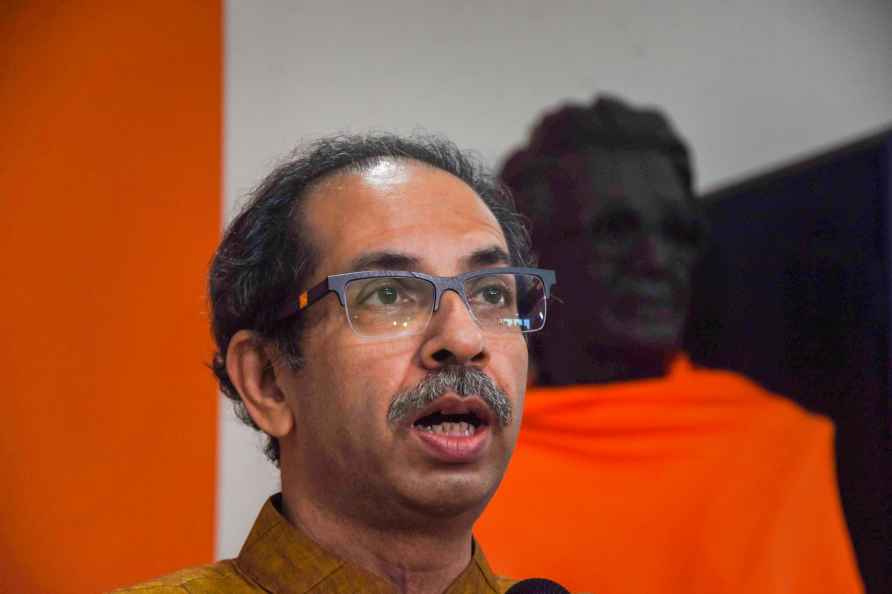 [Mumbai: Former Maharashtra chief minister & Shiv Sena Chief Uddhav Balasaheb Thackeray during a press conference at Shiv Sena Bhavan, in Mumbai, Friday, July 1, 2022. ( /PTI] New Delhi, July 1 : The past 10 days have been full of political upheaval and surprises in Maharashtra politics. First, it was the rebellion of a large section of Shiv Sena MLAs led by senior party leader Eknath Shinde on June 21 that brought about the collapse of Uddhav Thackeray-led Maharashtra Vikas Aghadi (MVA) government. Thackeray resigned as Maharashtra Chief Minister on June 29 after the Supreme Court refused to stay the Maharashtra Governor's direction to hold a floor test in the assembly on June 30. Another surprise came when everyone was expecting the return of Devendra Fadnadvis as Maharashtra CM after dislodging the MVA government. But the man himself announced that Shinde will be the next head of the new government in the state. Though Fadnavis had announced that he will not take any position in the new Maharashtra government, the BJP leadership asked him to join the new dispensation as Shinde's deputy. Shinde and Fadnavis took oath as Maharashtra Chief Minister and Deputy CM respectively on the evening of June 30. BJP's decision to make rebel Shiv Sena leader Shinde as Maharashtra CM is being seen by many as an attempt to make Thackerays redundant in the state politics. CVoter-IndiaTracker conducted a nationwide survey on behalf of IANS to know people's views about the future of the next generation of the Thackeray family in Maharashtra politics. During the survey, Indians were divided in their opinion about the capability of Aaditya Thackeray, son of Uddhav Thackeray to emerge as a mass leader on the political landscape of Maharashtra's future. According to the survey data, while 49 per cent of the respondents believe that Aaditya Thackeray has the potential to emerge as a mass leader in Maharashtra politics, 51 per cent respondents did not agree with the sentiment. The survey highlighted political polarisation in the views of NDA voters and opposition supporters on the issue. During the survey, while 61 per cent opposition voters asserted that Aaditya will be able to carry forward the legacy of his grandfather Balasaheb Thackeray and emerge as popular leader in state politics, 68 per cent of NDA voters expressed completely different opinion about him. The survey revealed differences in the opinions of different social groups about the future of Aaditya Thackeray in Maharashtra politics. During the survey, while majority of Scheduled Castes (SC) - 66 per cent and Scheduled Tribes (ST) - 69 per cent voters asserted that Aaditya Thackeray will emerge as mass leader in future, majority of Other Backward Classes 60 per cent and subsequent proportion of Upper Caste Hindus (UCH) - 59 per cent did not share the sentiment about him. According to the survey data, views of Muslims were divided on the issue. During the survey, while 55 per cent Muslims expressed their faith in Aaditya Thackeray's abilities to emerge as mass leader in Maharashtra, 45 per cent respondents from the community expressed completely different views. /IANS

Days of fear, corruption and militancy are over: J&K L-G
[Srinagar: Jammu and Kashmir Lt Governor Manoj Sinha inspects the parade after unfurling the national flag during 76th Independence Day celebrations a

Three of a family killed in Gujarat road mishap

Bhavnagar (Gujarat), Aug 14 : In a tragic accident, three members of a family were killed on the spot while one was seriously injured after a truck rammed into their car on Vallabhipur-Amreli road in […]

This girl embroidered India's map in over 19 minutes

Varanasi, Aug 14 : She practiced for six months and then set a record by embroidering the map of India within 19 minutes and 46 seconds. Kiran Singh lives in a village in the Babatpur area, abou […]

Berlin, Aug 14 : The German government has promised safe passage to Germany for all Afghan staff that worked for its embassy in Kabul before the Taliban returned to power in Afghanistan last year. […]