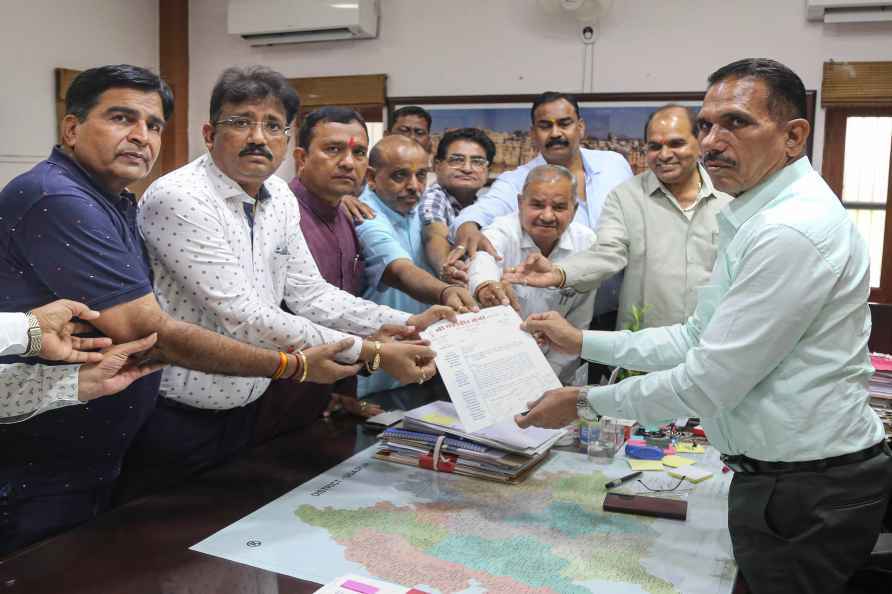 [Udaipur: A delegation of Jain community meets the district collector Tarachand Meena seeking police protection to one Nitin Jain while fearing that he might be attacked, in Udaipur, Friday, July 1, 2022. Nitin was one of the targets of the accused who were arrested after the murder of Kanhaiya Lal. ( /PTI] By Archana Sharma Jaipur, July 1 : An Indo-German couple had to leave their house and Jaipur after they were attacked, threatened and abused by residents of a Jaipur society over a petty issue. The couple ran from pillar to post to get justice, but when the police arrested her husband and misbehaved with him in the police station, the couple left and shifted to Sikar city, Rajasthan. Julia is married to an Indian, Utkarsh. The German woman, Julia said that cops arrested her husband who filed the complaint and let the accused go scot-free. "Our house was smashed, door locks and window glass broken, Ganesha idol broken too and we were abused with the choicest of abuses; we continued calling the police but there was no response. The police came an hour late and went straight to the other side who is a senior officer," alleged Julia in her complaint filed with the police. However, even after seven days of the incident, the FIR is yet to be lodged. The videos of the attack are going viral in which the couple is seen being abused and attacked by the people from their society. They are also seen abusing Julia. While talking to IANS, Julia said that they faced public ire because their dog pooped in the society campus. The couple cleaned it and promised it would not happen again. However, the crowd (one of whom she claimed is an officer) took out hockey sticks and continued threatening the couple. Julia was asked what she was doing in India and that she should go back to her country, said Utkarsh speaking to IANS adding, "I called the police, but they came an hour late and surprisingly, instead of coming to our place, they went to the other side. I told them we lodged the complaint and you should have come to us but they misbehaved with me too," said Utkarsh. "Next day, the police approached our house and said if you have anything to tell us, come to the police station. When I went there, they arrested me for misbehaving with one of the accused's daughter. There is CCTV in the society and they could have checked if I misbehaved, however, they preferred to jail me." Julia in her complaint said that her husband was harassed in jail also. When he wanted water, he was given the water which was inside the mouth of a policeman who threw it in a bottle and asked him to gulp the same. Seven days after the incident, no FIR has been registered, said Utkarsh. IANS contacted Ramnagariya police station SHO Rajesh Kumar who said that a probe is on in the case. "The couple has given a written complaint; we are checking it with technical aspects as there have been some videos going viral, and then we shall take steps. They have vacated the house and we have no clue about their whereabouts." The couple has also complained to the German embassy. The Rajasthan police is already facing flak for not paying heed to Kanhaiya Lal, a tailor beheaded by two accused in Taliban style. The deceased had complained that he was being threatened but the police arrested him instead of those who threatened him. /IANS

Shivamogga: Police personnel deployed to maintain law and order after a dispute between two groups over installing poster of Hindutva icon V.D. Savarkar and the 18th century Mysuru ruler Tipu Sultan a […]