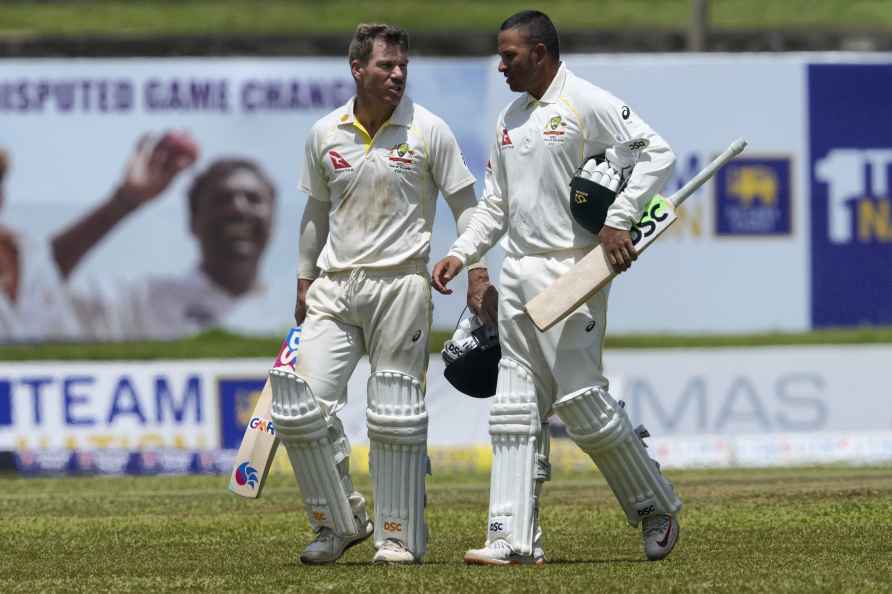 [Galle: Australia's David Warner, left, and Usman Khawaja walk back to pavilion after defeating Sri Lanka by ten wickets win in day three of the first test cricket match between Australia and Sri Lanka in Galle, Sri Lanka, Friday, July 1, 2022. /PTI] Galle, July 1 : Australia off-spinner Nathan Lyon joined the league of top-10 Test wicket-takes in the world as the Pat Cummins-led tourists routed Sri Lanka by 10 wickets in the first match at the Galle International Stadium here on Friday. The 34-year-old Lyon took four wickets as Sri Lanka were bundled out for 113 in the second innings leaving Australia with the task of scoring just five runs for victory. The visitors completed the formality in only the fourth ball of the first over. Meanwhile, Lyon moved into outright 10th on the all-time Test wicket-takers' list and joined the likes of Sri Lanka's Muttiah Muralitharan, India's Anil Kumble and Ravichandran Ashwin and the late Australian spin legend Shane Warne. Lyon took a total of nine wickets across the two innings in the opening Test. The Australian now has 436 Test wickets, only three behind former South Africa tearaway bowler Dale Steyn and six behind India spinner Ravichandran Ashwin. Backing up his 5/90 on day one after Sri Lanka won the toss and elected to bat, Lyon was equally devastating on day three, as the hosts' plan to counter-attack backfired. Dimuth Karunaratne's side could only bat 22.5 overs in their second innings, the shortest completed innings in their Test history, as Lyon claimed four scalps. Karunaratne himself was Lyon's first of the four, with his bottom edge pouched by Alex Carey. Kusal Mendis' top edge fell to Mitchell Swepson for Lyon's second, before claiming Ramesh Mendis to move to 435 Test wickets. The wicket of Mendis meant Lyon passed Indian fast-bowling all-rounder Kapil Dev to go outright 10th on the list, with the wicket of Niroshan Dickwella moving the Aussie great to 436. Friday's spell puts a third Australian into the top-10, with Lyon joining Warne (708) and fast-bowler Glenn McGrath (563). Lyon joins the club at the same venue he made his Test debut in 2011, when he claimed Kumar Sangakkara with his first delivery. While the likes of Ashwin and Murali have relied on the carrom ball and doosra respectively to torment the best batters in the world, Lyon has made a mark through subtleties in bounce of his conventional stock ball. Thanks to Lyon's four-wicket haul on Friday, Australia claimed their first Test win in Galle in 11 years. David Warner ensured the match ended quickly, taking just four balls to hit two boundaries to end the contest. The teams will meet again at the same venue on July 8 for the second Test. Brief scores: Sri Lanka 212 and 113 in 22.5 overs (Dimuth Karunaratne 23; Nathan Lyon 4/31, Travis Head 4/10) lost to Australia 321 and 10 for no loss in 0.4 overs (David Warner 10 not out). /IANS