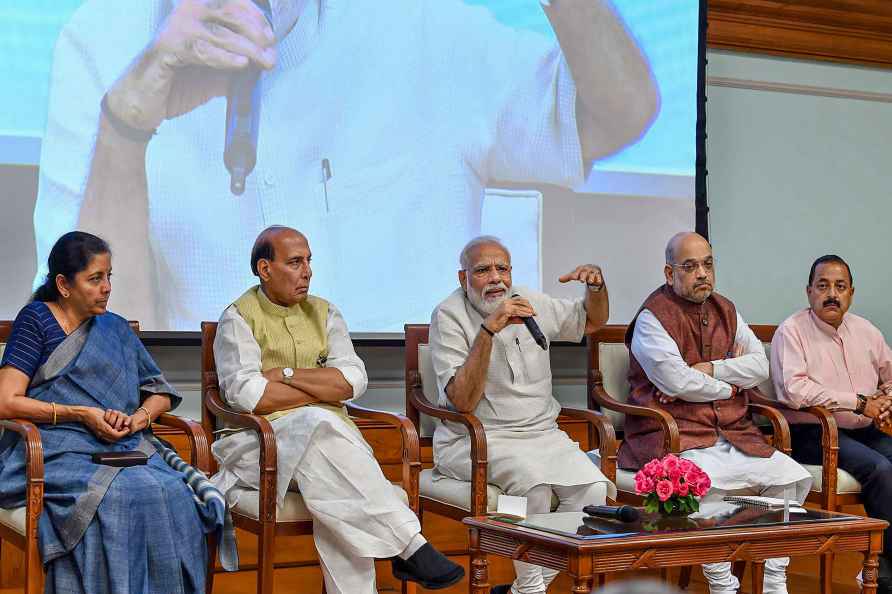 By Santosh Kumar Pathak New Delhi, June 30 : Terming the murder in Udaipur as a terrorist attack, former Union Minister Rajyavardhan Singh Rathore says that Gehlot government of Rajasthan is solely responsible for the incident. In conversation with IANS, Rathore said that the Chief Minister's focus is entirely on keeping his chair safe, and due to Congress' vote bank and appeasement policy, such violent incidents are happening repeatedly in the state. He holds Chief Minister Ashok Gehlot accountable for such incidents and says that if he cannot handle his responsibility, he should relinquish his position. Q. Are you (BJP) terming the incident of murder in Udaipur as a 'terrorist attack'? A. See, Rajasthan Chief Minister Ashok Gehlot calls this incident a murder. But who films a murder? What makes a murder video viral with provocative statements? This is not a common crime. Such barbarism can only be done by dreaded terrorists struck by religious hysteria. Rajasthan has always been a peaceful state but due to Congress' vote bank and appeasement politics, such incidents are happening repeatedly. Q. Who is responsible for such incidents happening repeatedly in Rajasthan? A. It is the appeasement policy of the Gehlot government that is entirely responsible for such terrorist incidents. Terrorist organisations are flourishing in Rajasthan. Ever since this government took over, the spirits of anti-social elements are high and anarchy is at its peak in Rajasthan. During festive occasions, different laws are made for different religions. One community is banned over festivals while another is given a free hand on the timing of their festivals. The fundamentalist organisation is given security for their rallies; and now the situation has become so bad that on the demand of Congress MLAs, there are reports of even transfer of Hindu doctors from Muslim areas. Q. Why is Rajasthan government or police unable to curb such incidents? A. Because the government of Rajasthan is only trying to save its chair. The police is deployed only for the protection of MLAs and ministers. The MLAs are constantly being monitored for which leader and minister they are talking to. Who can leave their side? All of Chief Minister's attention is focused on retaining his power and position. Q. But the Chief Minister blames BJP for the situation and is demanding that Prime Minister Modi address the nation? A. Chief Minister Ashok Gehlot, who is also the Home Minister of the state, is repeatedly running away from his responsibilities. Such violent incidents are happening one after the other in Rajasthan. It has happened in Jodhpur, in Jhalawar, in Bundi, in Alwar. The responsibility for all this lies with the Chief Minister. If he cannot handle his responsibility and has to turn to the Prime Minister, then he should give up his chair. Q. You had also alleged through a tweet that Rajasthan is on its way to become a Taliban state under Congress rule. A. The appeasement policy of Congress has emboldened jihadis. The situation in the state is very bad. Through you, we want to say that the Gehlot government should wake up to its responsibilities. He still has a year and a half to go. /IANS

PM Modi greets citizens on Independence Day
[**EDS: SCREENGRAB FROM YOUTUBE** New Delhi: Prime Minister Narendra Modi addresses the nation from the ramparts of the Red Fort on the occasion of th

Any nation that has progressed, has discipline ingrained in its citizens; if all follow their responsibilities, India will grow fast: PM.

Any nation that has progressed, has discipline ingrained in its citizens; if all follow their responsibilities, India will grow fast: PM. […]

Toronto, Aug 14 : Romania's former world No. 1 Simona Halep, a two-time major champion, beat the challenge from No.7 Jessica Pegula of the US to advance to her fourth National Bank Open final and bigg […]

Respect for Women is important pillar for India's growth, we need to support our 'Nari Shakti': PM.

Respect for Women is important pillar for India's growth, we need to support our 'Nari Shakti': PM. […]

A distortion has crept in our conduct and we at times insult women, can we take pledge to get rid of this in our behaviour, asks PM.

A distortion has crept in our conduct and we at times insult women, can we take pledge to get rid of this in our behaviour, asks PM. […]