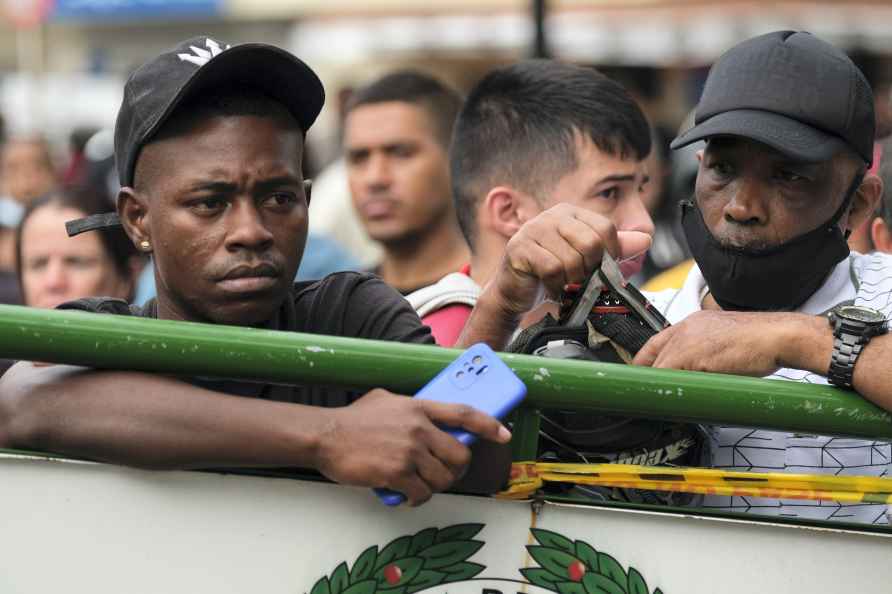 [Tulua: Inmates' relatives wait for news of their loved ones outside a jail where there was a deadly fire in Tulua, Colombia, Tuesday, June 28, 2022. Authorities say at least 49 people were killed after the fire broke out during what appeared to be an attempted riot early Tuesday. /PTI] By Ashok Nilakantan New York, June 28 : US Vice President Kamala Harris has virtually walked into the circle of fire with her tweet on abortion rights, saying "this is not over" and the Joe Biden administration will do everything in its power to defend medication abortion even as pro-abortion rights activists' protests over the apex court's ruling spread like a prairie fire across the nation. The Vice President's tweet on abortion rights has invited heavy flak from even liberals as "the embodiment of thoughts and prayers". Pro-choice protests broke out throughout the country after the Supreme Court decision overturning the Roe vs Wade verdict on Friday. "Harris is facing a rare bipartisan attack on Twitter following her post about fighting for abortion rights from Friday night," Fox News reported in its bulletin. Harris posted a twitter image of herself watching CNN's coverage of pro-choice protests while flying on Air Force 2. "I know there are women out there who are afraid. To those of you who feel alone and scared: I want you to know the President and I are fighting for you and your rights. We are in this fight together," Harris had tweeted. Most democrat politicians denounced the court's decision, but equally some liberal Twitter users called out Harris' tweet as being too vague and meaningless. "Could you be specific? Like, *how* are you fighting? Describe the tactics, explain the policy, give us the rundown," New York Magazine contributor Hillary Kelly asked in her post. Actor James Urbaniak joked, "I want you to know: We are watching TV." "Um. 36,000 feet above everything, watching on a big a-- TV in a private plane, and the message is 'we're in this together'? I'm not sure you guys get where the rest of us are at right now," Daily Kos writer Joan McCarter posted. Ernest Owens, editor-at-large for Philadelphia magazine, tweeted, "Change his mind on this [changing the filibuster (republican opposition to abortion rights and protect abortion rights] and I'll believe you." Though much of the dissension she has invited for her tweet from is only a rather "inappropriate place and time" and for not being specific from the high office she held, it should be observed that in 2021, court documents indicated that Harris as an abortion rights activist worked a case against pro-life journalist David Daleiden as California's attorney general. More recently in May, Harris met virtually with abortion providers at the White House to discuss the potential impact of the Supreme Court overturning Roe vs Wade, Fox News reported. Here are Harris' views on record on abortion rights. She had slammed Texas' new law banning abortions after six weeks as she met with patients and providers, saying that the right for women to make decisions about their bodies is 'not negotiable'. Harris met with abortion patients and providers from Texas, Mississippi, Kentucky and New Mexico to discuss the new abortion law implemented by Texas -- the same day the state was sued by The Department of Justice. The law bans abortions after six weeks -- a time frame in which women may not even know they are pregnant. "The right of women to make decisions about their own bodies is not negotiable," Harris had said during the discussion. "The right of women to make decisions about their own bodies is their decision. It's their body." The law, which went into effect on September 1, was met with outrage and the state was criticised for its 'unconstitutional' approach to handling women's bodies. The law allows the people who sue to receive bounties of at least $10,000 and makes no exceptions in cases of rape or incest, although there are some very narrowly defined exemptions for the mother's health. In a statement, Harris had said: "We will not stand by and allow our nation to go back to the days of back-alley abortions. We will not abide by cash incentives for virtual vigilantes and intimidation for patients. We will use every lever of our administration to defend the right to safe and legal abortion -- and to strengthen that right." President Joe Biden had issued his own blistering statement in response to the Texas law. "This law is so extreme it does not even allow for exceptions in the case of rape or incest," he had said, adding that he would direct government lawyers "to launch a whole-of-government effort to respond to this decision" and to ensure that women in Texas have access to safe and legal abortions. This was before the Roe vs Wade SC verdict of 1973 was overturned. /IANS