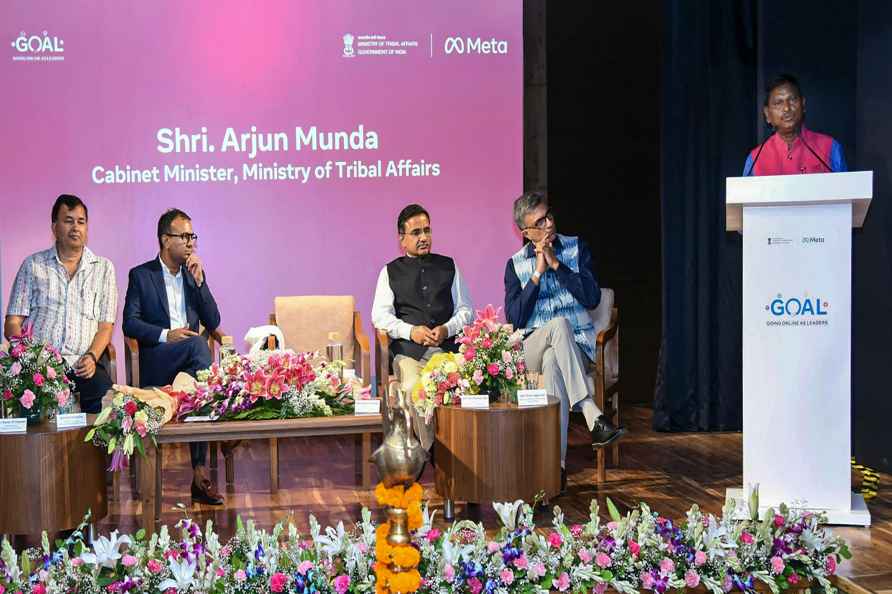 [**EDS: HANDOUT PHOTO MADE AVAILABLE FROM PIB ON TUESDAY, JUNE 28, 2022** New Delhi: Union Minister for Tribal Affairs Arjun Munda speaks during the launch of 2nd Phase of GOAL (Going Online As Leaders) 2.0 and felicitation of mentees from phase-1 of GOAL (Going Online As Leaders), in New Delhi. ( /PTI] New Delhi, June 28 : Meta (formerly Facebook) on Tuesday extended its collaboration with the Ministry of Tribal Affairs to provide digital skill training for 10 lakh tribal youth and women in the country. The tech giant launched the second phase of the 'Going Online As Leaders' (GOAL) programme that will aim to digitally upskill, connect and empower 10 lakh youth and women from the tribal communities of the country. "Digitally empowering India's tribal communities would contribute significantly to the socio-economic development of the country and an important step towards creating a flourishing community of tribal leaders," said Union Minister for Tribal Affairs Arjun Munda. "In the second phase, we will reach out to 10 lakh women and youth entrepreneurs and will also create a platform for more than 50,000 self-help groups and 10 lakh families associated with 'TRIFED' to take their products global," the minister noted. The programme will also include 'Facebook Live' sessions in nine languages by master trainers on topics like anti-scamming education, staying safe online, how to combat misinformation and being a good digital citizen. "We are deeply inspired by the stories of some of the tribal leaders who benefitted from the first phase of 'GOAL' that we kicked off in 2020," said Ajit Mohan, Vice President and Managing Director, Facebook India (Meta). "India's massive digital transformation can be complete when even the most vulnerable communities of our society are digitally empowered," he added. "Goal 2.0 will further enable lakhs of tribal women and young people to gain from the programme," said Anil Jha, Secretary, Ministry of Tribal Affairs. Tribal population constitutes about 8.6 per cent of the total population in India. /IANS

Attari: Residents during a 'Har Ghar Tiranga' campaign, organised under the aegis of Azadi Ka Amrit Mahotsav, near the India-Pakistan Attari-Wagah border, around 35 kms from Amritsar, Sunday, Aug 14, […]