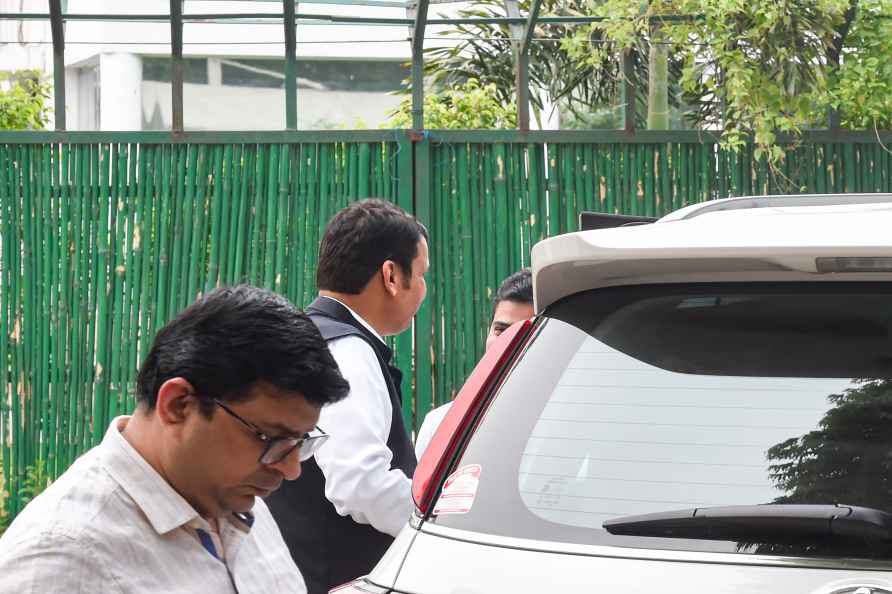 [New Delhi: Former Maharashtra chief minister Devendra Fadnavis leaves after meeting BJP National President JP Nadda amid the political crisis in Maharashtra that is threatening MVA's government, in New Delhi, Tuesday, June 28, 2022. ( /PTI] New Delhi, June 28 : Amid the ongoing political crisis in Maharashtra, BJP chief J. P. Nadda discussed the situation in a meeting with former Chief Minister Devendra Fadnavis at his residence here. Sources said the agenda of the meeting was the current political situation. "Future of Maha Vikas Aghadi (MVA) government hangs in balance and there is complete uncertainty over continuity of government. Current political situation is agenda of meeting between Nadda and Fadnavis, and also the party's future course of action," sources said. Bharatiya Janata Party's national general secretary Arun Singh has also reached Nadda's residence. It is learnt that Fadnavis will also meet Union Home Minister Amit Shah to discuss the Maharashtra situation. Earlier in the afternoon, Fadnavis reached the national capital to meet the BJP central leadership. Sources said that Fadnavis will brief the central leadership about the political situation in Maharashtra. "Fadnavis will also discuss the party's future course of action," sources said. As uncertainty continues to haunt the MVA government the BJP is closely following the political developments and has adopted a wait and watch policy. On Monday, the Maharashtra BJP State Core Committee meeting was held in Mumbai to discuss all the aspects in detail. "So far we have not got any proposal from anybody in this matter... Whenever it is received, we shall consider it and call another core committee meeting if needed," senior Maharashtra leader Sudhir Mungantiwar had said, reiterating the party's known stance. A political crisis hit the Maha Vikas Agadhi government last week when Shiv Sena MLAs, including Minister Eknath Shinde revolted against the party leadership. A BJP insider said the party is treading cautiously amid the changing political situation in Maharashtra to avoid a repeat of the 2019 misadventure when Devendra Fadnavis was sworn in as the chief minister of Maharashtra and later resigned due to lack of numbers. /IANS

Gehlot camp not in favour of Pilot as CM, says Maken

Jaipur, Sep 26 : Congress leader Ajay Maken, who was in Jaipur along with Mallikarjun Kharge to convene the CLP meeting for deciding the new CM face, on Monday spoke to the media after a high-voltage […]

Azam Khan, son return their secutiry to UP govt

Rampur, Sep 26 : Senior SP MLA Mohd Azam Khan and his son Abdullah Azam have returned their security to the Uttar Pradesh government. Khan said that he did not require government security and ha […]