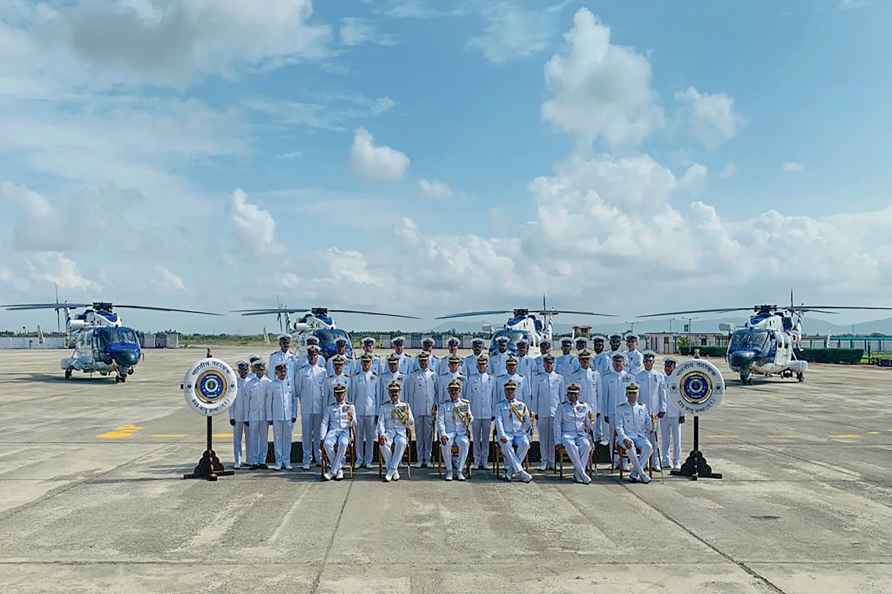 [**EDS: TWITTER IMAGE POSTED BY @IndiaCoastGuard ON TUESDAY, JUNE 28, 2022** Porbandar: Indian Coast Guard officials pose for photos after an advanced light helicopter (ALH) MK III squadron was commissioned by the Director General, at ICG Air Enclave in Gujarat's Porbandar. 13 ALH MK III aircrafts have been inducted in the ICG in a phased manner, and four of these are positioned at Porbandar. ( /PTI] Mumbai, June 28 : A Pawan Hans helicopter ditched into the Arabian Sea waters near the ONGC's Sagar Kiran oil-rig, off Mumbai High Fields, around 175 km off the country's commercial capital, official sources said here on Tuesday. The chopper was carrying at least 7 passengers, reportedly ONGC staffers, and 2 pilots and a major operation comprising the ONGC, Indian Navy, Indian Coast Guard and offshore supply vessel, was launched to rescue them. Earlier, 5 were rescued from the sea-water and within the next couple of hours by 1400 hours, all the nine were safely saved, said officials. The rescue operation comprised ONGC's offshore supply vessel Malviya-16 and a boat from the oil rig Sagar Kiran, while the Indian Coast Guard deployed its helicopters to drop rafts near the chopper and the Indian Navy sent an ALH and a Sea King chopper in the efforts. The cause of the emergency landing on water, whether related to weather or technical issues, is not immediately clear and further details are awaited, according to ONGC officials in Mumbai and New Delhi. /IANS

Islamabad, Sep 23 : The overall death toll in Pakistan from the devastating floods has increased to 1,596, with 12,863 others injured, the National Disaster Management Authority (NDMA) said. In […]