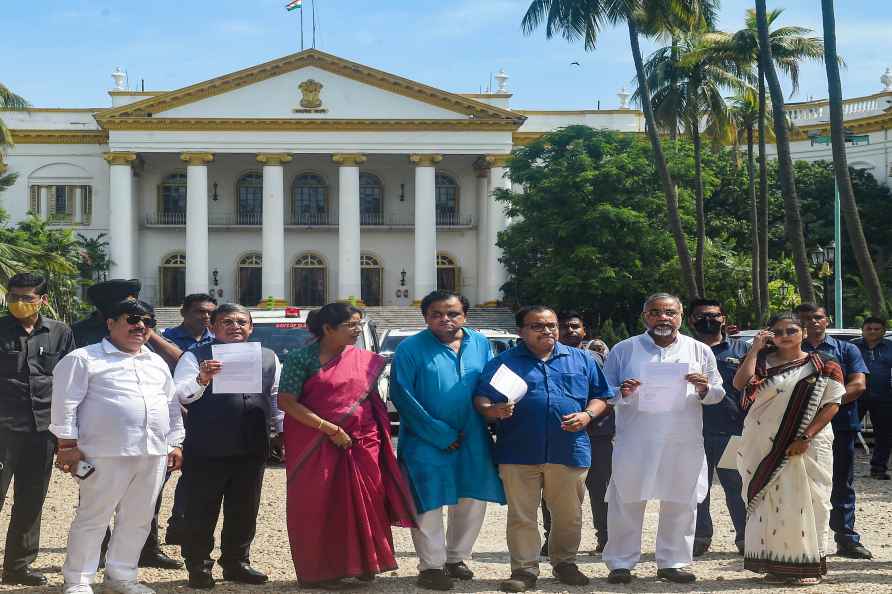 [Kolkata: AITC delegation led by West Bengal Higher Education Minister Bratya Basu comes out after a meeting with West Bengal Governor Jagdeep Dhankhar seeking action against BJP leader Suvendu Adhikari for his alleged involvement in corrupt activities, in Kolkata, Tuesday, June 28, 2022. ( /PTI] Kolkata, June 28 : The Enforcement Directorate (ED), which will be conducting a parallel probe in the West Bengal School Service Commission (WBSSC) recruitment irregularities scam along with Central Bureau of Investigation (CBI), on Friday, started its probe after filing two FIRs in the matter. ED, the investigation arm of the Union finance ministry, has also questioned five persons, including two petitioners, in the matter on Tuesday to have the preliminary data on the scam. The agency's sleuths, considering their specific expertise, will investigate the money trail angle in the WBSSC scam. In fact, it was CBI sleuths only who approached ED to conduct this parallel probe considering their specific expertise in probing cases relating to financial irregularities and embezzlement. According to ED sources, since it was the petitioners who played the role of whistle- blowers in the WBSSC scam and filed petitions in the Calcutta High Court, the agency sleuths have started their probe process with the questioning of some of these petitioners. From these petitioners the ED sleuths specially tried to have some idea of what exactly raised doubts in their minds about the irregularities in recruitments and the documents they submitted to the Calcutta High Court in support of their petitions. In the next stage, sources said, the ED sleuths will be interrogating the different accused in the matter, especially the erstwhile members of the WBSSC's screening committee who are perceived to have played the key role in the scam. Earlier a judicial committee appointed by the Calcutta High Court had also held the members of the screening committee responsible for the scam. Another team of ED officials, it is learnt, are now busy examining the bank accounts and property details of the accused in this connection and trying to trace out the extent of their assets which are disproportionate to their income. CBI has already questioned former West Bengal education minister and Trinamool Congress secretary general Partha Chatterjee and the minister of state for education, Paresh Chandra Adhikari more than once in relation to this scam. Adhikari's daughter, Ankita Adhikari was dismissed from her service as a higher secondary political science teacher in a state-run school following a Calcutta High Court order after it was proved that she appointed flouting all norms even though she did not qualify in the merit list and also did not appear for the personality test. /IANS