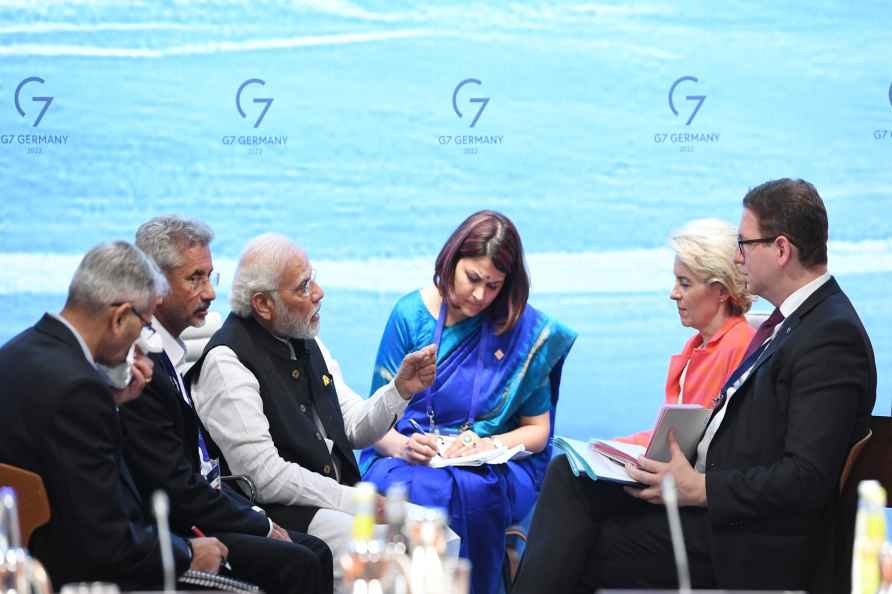 [**EDS: TWITTER IMAGE POSTED BY @MEAIndia ON MONDAY, JUNE 27, 2022** Germany: Prime Minister Narendra Modi interacts with President of European Commission Ursula von der Leyen and other dignitaries during a meeting on the sidelines of G-7 Summit, in Germany. External Affairs Minister S. Jaishankar is also seen. ( /PTI] New Delhi, June 27 : The Jharkhand Mukti Morcha (JMM) and the Aam Aadmi Party (AAP) were not present during the filing of the nomination by Yashwant Sinha, the Opposition's joint candidate for the Presidential poll. Senior leaders of 16 Opposition parties, including NCP Supremo Sharad Pawar, former Congress President Rahul Gandhi, CPI-M General Secretary Sitaram Yechruy and Samajwadi Party chief Akhilesh Yadav accompanied Sinha, when he filed his nomination on Monday. However, the JMM and AAP did not attend the event and indicated chinks within the opposition ranks. The JMM has been having second thoughts to the candidature of Sinha after Draupadi Murmu was named by the NDA as their candidate. Murmu, a fellow Santhali from Odisha, is hard to be ignored for the JMM due to domestic politics, which has a large base in the tribal areas of the state, said sources, adding that if it supports Sinha, who has been an MP from Jharkhand, then it may hamper its prospectus. Though JMM is in alliance with the Congress in the state, it chose to stay away from the nomination filing of Sinha. Rahul Gandhi while speaking after the nomination said, "This is a fight of the ideology and the opposition is united on the candidature of Yashwant Sinhaji." Other leaders who were present included National Conference chief Farooq Abdullah, D. Raja of CPI; Saugata Roy from Trinamool Congress; A. Raja and T. Siva from the DMK among other Opposition leaders. Sinha also paid tributes to Mahatma Gandhi and Dr B.R. Ambedkar before filing his nomination. The TRS has also announced its support to Sinha. "President of @trspartyonline Sri KCR Garu has decided to extend support to the candidature of Sri @YashwantSinha Ji in the election for President of India. Along with our Members of Parliament, I will be representing the TRS at the nomination today," working president of TRS and minister Telangana government K.T. Rama Rao tweeted eary in the day. The support to Sinha as joint opposition candidate comes days after the TRS opted out of the meeting called by West Bengal Chief Minister Mamata Banerjee to discuss the strategy for the Presidential polls. Now Sinha will also begin his campaign to meet MPs and MLAs. On Friday, Sinha had telephoned Prime Minister Narendra Modi and Defence Minister Rajnath Singh's offices seeking their support for the poll. He also wrote a letter to all the leaders of the opposition parties. In the letter Sinha wrote: "India is going through extremely difficult times. I shall raise my voice for the common people." Sinha had also said that the leaders of the other ideology are intent on throttling the Constitution and "making a mockery of the people's mandate in elections." BJP-led NDA candidate Draupdai Murmu filed her nomination last week in the presence of Prime Minister Narendra Modi, party chief J.P. Nadda, Union Ministers Rajnath Singh, Amit Shah, Nitin Gadkari and leaders of alliance partners. The Chief Ministers of NDA-ruled states were also present during Murmu's filing of nomination papers. /IANS

Surat, Aug 1 : Goldi Solar, India's most quality-conscious solar brand, on Monday announced its support for the government's 'Har Ghar Tiranga' campaign making it the first company to pledge to distri […]

By Venkatachari Jagannathan Chennai, Aug 1 : Chess pieces that move on their own as if possessed by some spirit, artistic boards, handcrafted pieces made of camel bones and several other novelties a […]

Biden: 'Justice has been delivered' in US strike killing al-Qaida leader al-Zawahri, 'this terrorist leader is no more', reports AP.

Biden: 'Justice has been delivered' in US strike killing al-Qaida leader al-Zawahri, 'this terrorist leader is no more', reports AP. […]