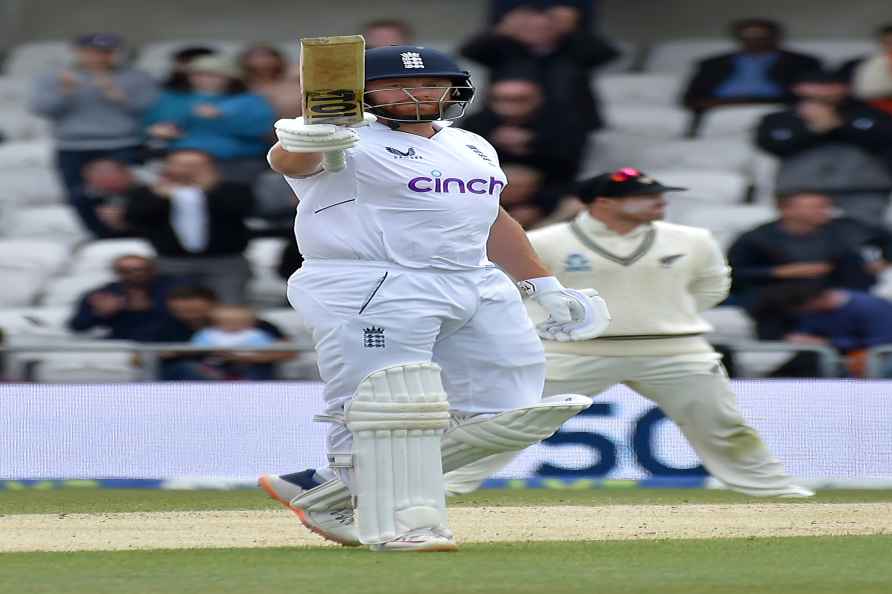 [England's Jonny Bairstow raises his bat to celebrate scoring fifty runs during the fifth day of the third cricket test match between England and New Zealand at Headingley in Leeds, England, Monday, June 27, 2022. /PTI] Leeds, June 27 : A century partnership between Daryl Mitchell (56) and Tom Blundell (88 not out) rescued New Zealand but England were cruising towards a clean sweep in the three-match series, needing 113 runs to win the third Test with eight wickets in hand. With England needing 296 runs to win the Test, the hosts rode an unfinished partnership of 132-run between Ollie Pope (81 not out) and former skipper Joe Root (55 not out) to reach 183/2 in 39 overs at stumps on the fourth day of the match. Pope and Root built on Jack Leach's five-wicket haul earlier in the day, to leave England well-placed to record a 3-0 series win over New Zealand. Mitchell and Blundell have been the two best batters on tour for New Zealand. They have often come together and bailed their side out of trouble. The second innings in Headingley was no different. After England's late strikes late on day three, the pressure was on the pair to produce the goods for the Kiwis once again. They did exactly that. Resuming on 168/5, the pair batter patiently for the first hour, before becoming a bit more adventurous with the bat. Once again frustrating the England bowlers, the two slowly but surely started to build on New Zealand's lead, nearing their half-centuries in the meanwhile. Their partnership would reach the 93-run mark at the end of the session, as New Zealand's lead grew to 223. The hosts needed to hit back in the afternoon session to regain control of the contest and an inspired performance by Matthew Potts and Jack Leach allowed them to do just that. Potts would get the ball rolling, trapping Mitchell after he reached his half-century. Leach would then replicate his performance from the first innings, blowing away the New Zealand tail. The wickets of Michael Bracewell, Tim Southee and Neil Wagner all came in relatively quick succession. Boult would be the final man to depart, with Leach getting a ten-wicket haul for the match. Blundell's brilliant tour with the bat ended with him remaining unbeaten on 88. The target was set for the hosts -- 296 runs for a 3-0 series clean sweep, according to a report in the ICC website. A target of 296 to win the third Test was far from straightforward, never mind that England struggled to get close to such a total for much of the past two years. But there's a different vibe to this 'Baz-ball' England era, and they put themselves in a commanding position come the close of day four thanks to their classy numbers three and four. Pope and Root will resume on the final day with half-centuries already to their name, with the pair's 132-run partnership taking the sting out of New Zealand's attack following the loss of the openers. With 113 runs required on Monday, it will take a collapse in the style of old England to deny them from here. Brief scores: New Zealand 329 and 326 all out in 105 overs (Daryl Mitchell 56, Tom Blundell 88 not out, Tom Latham 76; Jack Leach 5-66, Matthew Potts 3-66) v England 360 and 183/2 in 39 overs (Ollie Pope 81 not out, Joe Root 55 not out; Michael Bracewell 1-70). England need 113 to win. /IANS

Kiev, Aug 13 : Ukrainian President Volodymyr Zelensky has proposed to Parliament to prolong the current martial law and general mobilisation in the war-torn country for another 90 days. Two sepa […]