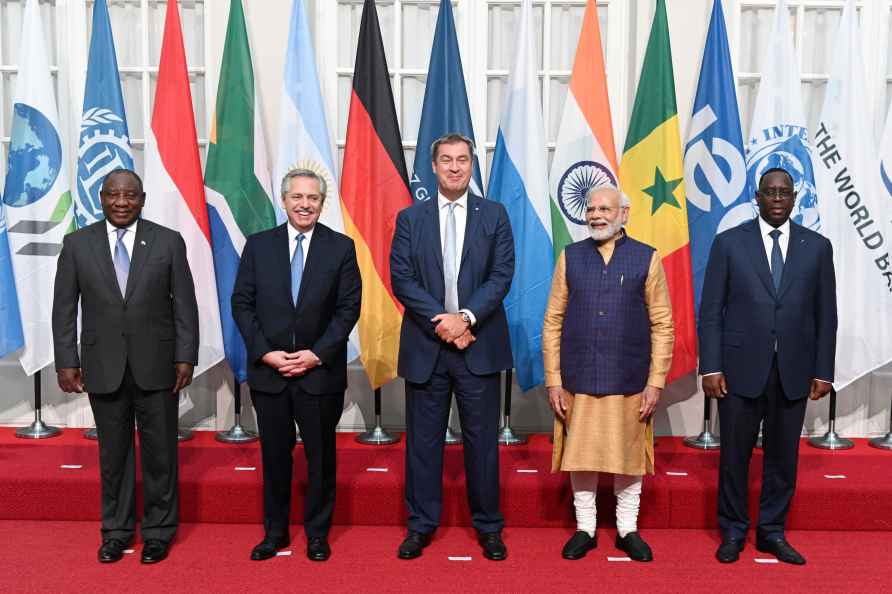 [From left, Cyril Ramaphosa, President of South Africa, Alberto Angel Fernandez, President of Argentina, Markus Soder (CSU), Bavarian Minister-President, Narendra Modi, Indian Prime Minister and Macky Sall, President of Senegal pose for a group photo at a reception at the Residenz, in Munich, Berlin, Sunday, June 26, 2022. On the occasion of the G7 Summit, the Bavarian Prime Minister invited guests to a reception at the Residenz. /PTI] Elmau, June 27 : Leaders of the Group of Seven (G7) kicked off their three-day annual summit in Schloss Elmau in south Germany's Bavarian Alps. The summit will focus on the Russia-Ukraine conflict, climate and others. The ongoing Russia-Ukraine conflict, especially further sanctions against Russia, will dominate the discussions at the summit of the world's major industrialised countries, as US President Joe Biden said on Sunday morning that the G7 would impose a ban on imports of Russian gold, Xinhua news agency reported. In the first working session on Sunday, the leaders discussed global economic issues. All G7 countries are concerned about the crises that are currently being dealt with: falling growth rates in some countries, rising inflation, shortages of raw materials and disruption to supply chains, according to the host German Federal Chancellor Olaf Scholz. After the following working session in the afternoon, the G7 leaders launched a billion-dollar global infrastructure and investment initiative, dubbed the "Partnership for Global Infrastructure and Investment." A German federal government source said on Saturday night that price caps of Russian oil will be discussed, a measure that envisages forcing Russia to sell oil to large buyers such as India at a significantly lower price in the future. The G7 countries are intensively discussing the issue and are "on the way to finding an agreement." The source said that there will be a statement about the issue of the Russia-Ukraine conflict by the G7 leaders. Ukrainian President Volodymyr Zelensky will deliver a speech via video during the summit. Leaders will also address the food crisis caused by the Russia-Ukraine conflict. They will try to seek ways to unblock Ukraine's grain exports across the Black Sea and make financial pledges to help countries hardest hit by the crisis. According to the policy priorities made by the host country Germany, G7 leaders will also address issues including climate change, by establishing a "climate club" put forward by Scholz. Besides leaders of Germany, the US, Japan, Canada, Britain, Italy, France and the EU, leaders from India, Indonesia, South Africa, Senegal and Argentina have been invited to take part in the summit. The West bloc is expected to take advantage of the G7 summit to try to persuade major developing countries to join their sanctions against Russia, experts said. /IANS

Gyanvapi case: Varanasi court rejects Muslim plea, next hearing on Sep 29
[Varanasi: Advocate Vishnu Jain, appearing for the Hindu side, interacts with the media after a hearing of the Gyanvapi Masjid-Shringar Gauri Temple c

New Delhi, Sep 20 : The Delhi High Court on Tuesday kept in abeyance an order of the Central Consumer Protection Authority (CCPA) which imposed a cost of Rs 1 lakh on e-commerce platform Amazon for se […]

[Hubballi: Police attempt to detain Popular Front of India (PFI) and Social Democratic Party of India (SDPI) workers during a protest against the raid of National Investigation Agency (NIA), in Hubbal […]

[New Delhi: Accused being produced to Patiala Court after a nationwide raid spearheaded by the National Investigation Agency (NIA), in New Delhi, Thursday, Sept. 22, 2022. As many as 106 activists of […]

[Varanasi: Advocate Vishnu Jain, appearing for the Hindu side, interacts with the media after a hearing of the Gyanvapi Masjid-Shringar Gauri Temple case at Varanasi District Court, Thursday, Sept. 22 […]