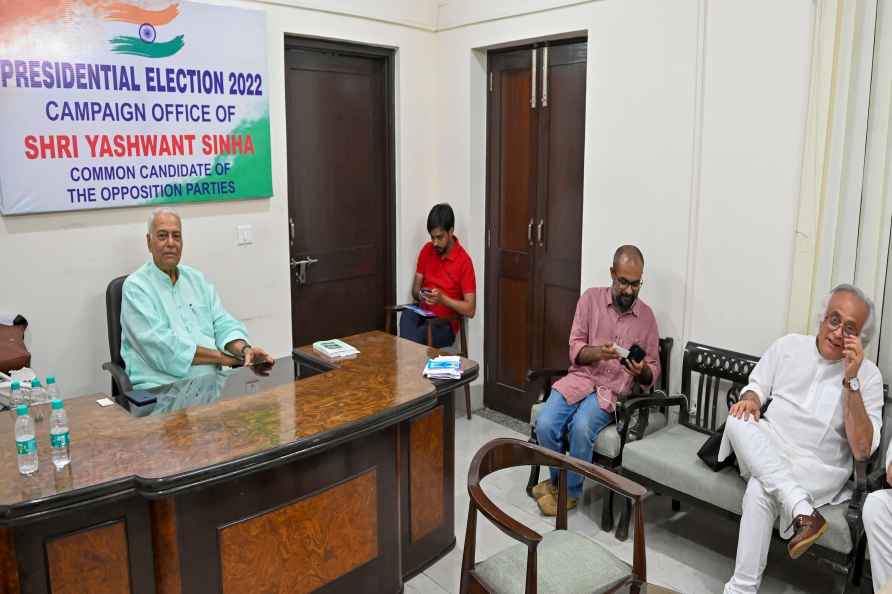 [New Delhi: Opposition's Joint Presidential candidate Yashwant Sinha during a meeting, in New Delhi, Sunday, June 26, 2022. Senior Congress leader Jairam Ramesh is also seen. ( /PTI] By Santosh Kumar Pathak New Delhi, June 26 : The BJP's decision to choose a tribal woman as its Presidential candidate has met with considerable success so far, with many parties extending support to Draupadi Murmu. All allies of the NDA, including JD(U) chief Nitish Kumar are unitedly supporting the BJP choice. Besides, leaders of two other political parties, Biju Janata Dal and YSRCP, (the ruling parties in Odisha and Andhra Pradesh respectively) signed on the nomination papers of Draupadi Murmu, further cementing her chance to win. BSP chief Mayawati on Saturday extended her support to Murmu, saying tribals form an integral part of the party's movement. Jharkhand Mukti Morcha (JMM), which is in power in Jharkhand in alliance with the Congress, is also under pressure to support the NDA presidential candidate as Murmu had been the governor of the state. The JMM is not being able to decide whether to support joint opposition candidate Yashwant Sinha as per its earlier commitment, or as per party's ideology and identity. It may likely to come round in support of Murmu as tribals comprise a significant part of the Jharkhand population. The pressure on the JMM, which is part of the UPA, can be gauged from the fact that it could not reach a decision in the meeting held on Saturday to deliberate as to who it should extend support to. The meeting was chaired by party president Shibu Soren and was attended by the party's elected representatives and senior leaders. Party's working president and Jharkhand chief minister Hemant Soren was also present in the meeting. During the meeting, Shibu Soren was authorised to take decision on behalf of the party with regard to the presidential election, sources said. It is also being said that Hemant Soren will meet Union Home Minister Amit Shah in New Delhi and only after that the JMM will be able to make up its mind whom to extend support in the presidential polls. Tribal MLAs and MPs in the ranks of the opposition are also under pressure. Odisha Chief Minister Naveen Patnaik has appealed to all MLAs, including that of Congress, to vote for Murmu, 'The daughter of Odisha'. Former Prime Minister and JD(S) leader H.D. Deve Gowda also prasied Murmu, giving more fillip to her chance to win. BJP's show of strength during the Murmu's filing of nomination proved that she is easily going to sail through. Murmu is likely to get more support from the opposition rank keeping in view the changing political scenario and the upcoming assembly elections in the country. Some political parties may be forced to support her due to political compulsions. /IANS