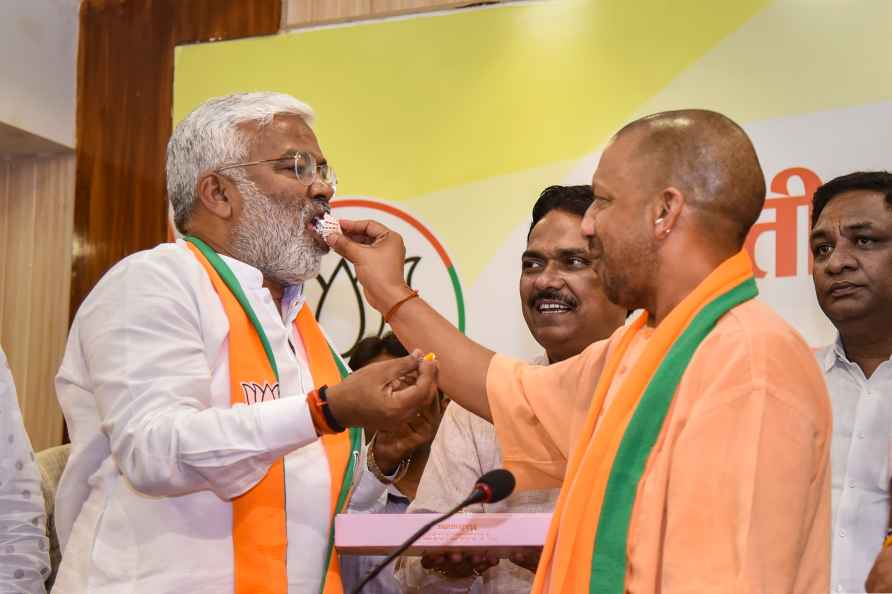 [Lucknow: Uttar Pradesh Chief Minister Yogi Adityanath and UP BJP President Swatantra Dev Singh feed each other sweets as they celebrate the party's victory in the by-polls, in Lucknow, Sunday, June 26 2022. ( /PTI] Hyderabad, June 26 : The BJP in Telangana is going all out to capture power in Telangana in the 2023 elections with the saffron party adopting aggressive approach and playing communal card. The recent statements by BJP state chief Bandi Sanjay, controversial MLA Raja Singh and others show that the party is looking to bet big on polarization to achieve its Mission 2023. Sanjay, who is also a Member of the Lok Sabha from Karimnagar, alleged that Muslim rulers in Telangana demolished several temples and built mosques over them. He demanded digging work at all mosques, saying there was a possibility of finding Shiva Lingams underneath. The BJP MP also stated that if BJP comes to power in Telangana, it will abolish all madrasas, do away with reservation for Muslims and remove Urdu as the second official language. Muslim leaders of the ruling Telangana Rashtra Samithi (TRS) and opposition Congress had filed police complaints against the BJP leader for delivering the hate speech. Raja Singh, a member of Telangana Assembly, earlier this month made offensive remarks against Sufi saint Hazrat Khwaja Moinuddin Chishti. On a complaint, Hyderabad police booked him for hurting religious sentiments of Muslims. The MLA from Goshamahal constituency is known for making remarks hurting the religious sentiments of Muslims and was booked for the offence on many occasions in the past. Raja Singh recently also spoke about their intentions to use bulldozers against their political rivals in Telangana, if the saffron party is voted to power in the state. He had sparked a row with his tweet amidst the Uttar Pradesh Assembly elections in February. The firebrand leader had released a video after the second phase of polling in Uttar Pradesh, threatening voters that if they don't cast their votes for BJP their houses will be demolished and they will be driven out of the state. After the BJP retained power in Uttar Pradesh, Raja Singh made another controversial statement on the subject, this time targeting TRS and Asaduddin Owaisi-led Majlis-e-Ittehadul Muslimeen (MIM), which has its strong hold in Hyderabad. The firebrand MLA remarked that Amit Shah is sending a bulldozer to Telangana. "The way Yogi ji used bulldozer against mafia in Uttar Pradesh, under Sanjay's leadership bulldozer will be used in Telangana definitely against these goondas and MIM. No goonda or mafia will be spared in Telangana," he said at the victory celebrations organised by the party's state unit. A few days later, Raja Singh urged people to make a list of TRS' corruption, encroachments of lands, properties etc so that these structures could be bulldozed. "A strong bulldozer will come to Telangana too to tear down the corruption of TRS like Yogi Adityanath ji ended the mafia in UP. I appeal to the public to identify all the corrupt activities and encroachments of public and private properties, land of poor and farmers by the MPs, MLAs and ministers of TRS," said the MLA. With victories in two Assembly by-elections in 2020 and 2021 and its impressive performance in 2020 polls to Greater Hyderabad Municipal Corporation, the saffron party has been projecting itself as the only viable alternative to TRS. The BJP has turned the heat on KCR-led government with the state chief Bandi Sanjay Kumar's 'Praja Sangram Yatra' and the visit by several central leaders of the party including party's national president J.P. Nadda and union home minister Amit Shah. They believe that people of Telangana want double-engine growth, a reference to the same party rule in the state and at the Centre. While targeting Chief Minister KCR for 'family rule' and 'corruption', the BJP is also focusing on minority appeasement. During his visit to Hyderabad on May 26, Prime Minister Narendra Modi had called for liberating Telangana from family rule and appeasement. He said those who conspired to divide the country and dreamt of ruling Telangana with oppression neither succeeded at the time of Independence nor will succeed now. BJP leaders have been slamming the TRS for its friendship with MIM. They say that the steering of 'car' (the poll symbol of TRS) is in the hands of Owaisi. The saffron party leaders are promising that if voted to power they will check 'atrocities' of MIM in the old city of Hyderabad. They are also promising that if BJP is voted to power Telangana Liberation Day will be celebrated officially. BJP's top leaders like Amit Shah and Nadda have repeatedly alleged that TRS is not celebrating the Liberation Day officially under pressure from MIM. Erstwhile Hyderabad State was merged with the Indian Union on September 17, 1948 after military action against Nizam's Army. With one Lok Sabha and seven Assembly seats in Hyderabad, MIM is a key political force. It has been backing TRS in the rest of the state. As KCR is reportedly planning to advance the polls, BJP leaders are likely to go more aggressive in playing the communal card to reap the benefits. "BJP's formula since 2014 has been to create a Hindu-Muslim divide, which would help consolidate Hindu votes in favour of the saffron party. In state after state, and during election after election, we witnessed how BJP played this card," said political analyst P. Raghavendra Reddy. "Since 2019, the saffron brigade is playing up Hindutva and/or 'Hindu khatre mein hai' card all through the year. The party believes, unless they sustain this campaign, electoral successes will not be easy. Hence, we see BJP leaders playing this card relentlessly these days across various states," he observed. He believes that in Telangana, which the BJP assumes is its best prospect in South India to win after Karnataka, the party workers and state unit leaders are doing everything they have been informed or advised to do by the high command. /IANS