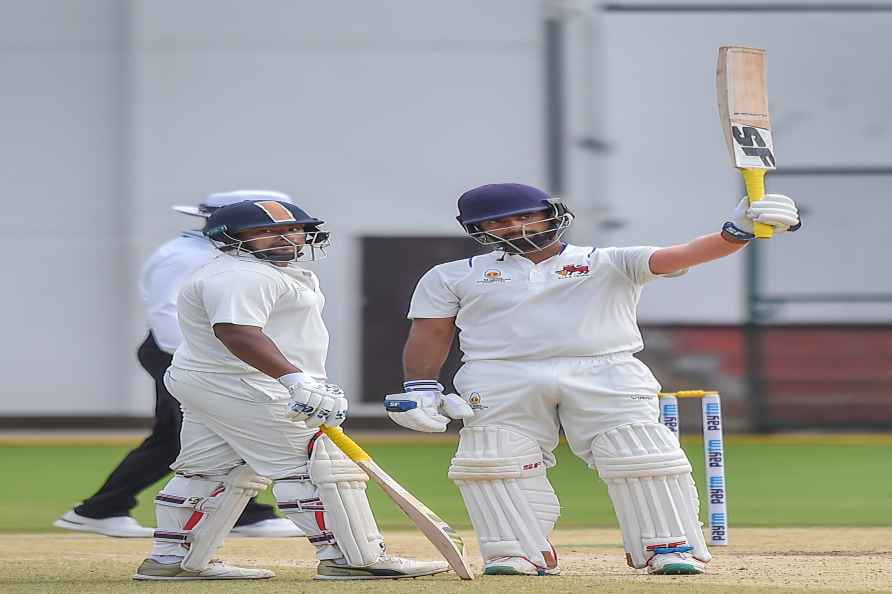 [Bengaluru: Mumbai's Suved Parkar raise his bat to celebrate his half-century during the fifth and final day of the Ranji Trophy final cricket match between Mumbai and Madhya Pradesh, at M Chinnaswamy Stadium in Bengaluru, Sunday, June 26, 2022. ( /PTI] Bengaluru, June 26 : Kumar Kartikeya Singh scalped four wickets while conceding 98 runs as Mumbai were bowled out for 269 in 57.3 overs in their second innings on day five of Ranji Trophy Final at the M. Chinnaswamy Stadium on Sunday, giving Madhya Pradesh a target of 108 runs to win their maiden title. Mumbai came out with an intention to get quick runs but barring Suved Parkar and Sarfaraz Khan, they did not get as much runs they had expected on the last day of the final. They were also hurt by the fact that they lost wickets at crucial intervals, including two run-outs. Resuming from the overnight score of 113/2, Parkar swept the first ball of the day for a boundary off Kumar Kartikeya Singh. But Madhya Pradesh, who resorted to bowling wide lines, got a breakthrough when Gaurav Yadav made a mess of Armaan Jaffer's stumps. With Madhya Pradesh's game plan quite clear -- spinners to bowl on leg stump line and fast bowlers to bowl in the wide outside the off-stump region -- they managed to keep Mumbai quiet for six overs. But Sarfaraz Khan had other ideas, sweeping Parth Sahani twice for four and six. Parkar, meanwhile, welcomed Anurag Agarwal by walking down the pitch and driving through extra cover before a misfield at point for four gave him his half-century. But Parkar was out in the very next over, missing the flatter ball from Kartikeya and lost his off-stump. Three balls later, Kartikeya had another wicket when Yashasvi Jaiswal, who didn't open due to ankle injury, heaved an expansive slog to short third man. Sarfaraz and Shams Mulani were providing stability for Mumbai before a huge mix-up caused the run-out of the latter for a non-existent single. In a bid to go big, Sarfaraz slog-swept an outside the off-stump ball from Sahani but the top-edge went straight to deep mid-wicket. Sarfaraz's dismissal at 45 meant he finishes the season with 982 runs from nine innings at an average of 122.75. Kartikeya and Sahani wiped off rest of the tail to give Madhya Pradesh a target of 108 for their first-ever Ranji Trophy triumph, which they will hunt for when play resumes after lunch. Brief Scores: Mumbai 374 all out in 127.4 overs and 269 all out in 57.3 overs (Suved Parkar 51, Sarfaraz Khan 45; Kumar Kartikeya Singh 4/98, Parth Sahani 2/43) against Madhya Pradesh 536 all out in 177.2 overs (Yash Dubey 133; Shams Mulani 5/173). Madhya Pradesh need 108 runs to win. /IANS