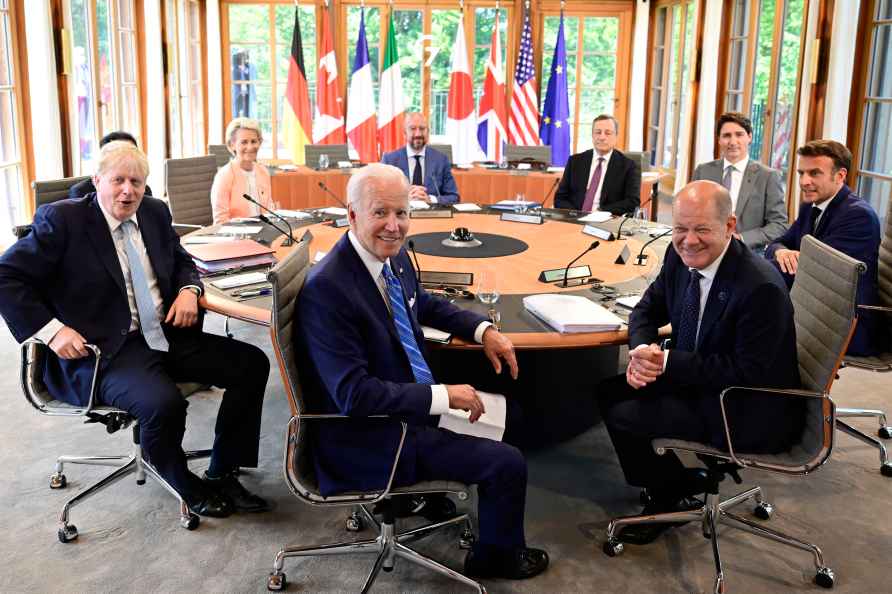 [Clockwise from left, Fumio Kishida (covered), Prime Minister of Japan, Ursula von der Leyen, President of the European Commission, Charles Michel, President of the European Council, Mario Draghi, Prime Minister of Italy, Justin Trudeau, Prime Minister of Canada, Emmanuel Macron, Prime Minister of France, German Chancellor Olaf Scholz, US President Joe Biden and Boris Johnson, Prime Minister of the United Kingdom sit at the first working session in Castle Elmau in Kruen, near Garmisch-Partenkirchen, Germany, on Sunday, June 26, 2022. The Group of Seven leading economic powers are meeting in Germany for their annual gathering Sunday through Tuesday. /PTI] Seoul, June 26 : South Korean President Yoon Suk-yeol will hold a trilateral meeting with his US counterpart Joe Biden and Japanese Prime Minister Fumio Kishida in Spain this week on the sidelines of a NATO summit, his office said on Sunday. The trilateral summit, set for Wednesday in Madrid, will be the first such gathering in four years and nine months since the last meeting was held in September 2017 on the margins of a UN General Assembly, reports Yonhap News Agency. No trilateral meeting has since taken place amid badly frayed relations between Seoul and Tokyo. The relations between the two countries have shown signs of a thaw since Yoon took office with a pledge to improve ties with the neighbouring nation, spurring speculation that the President and Kishida could hold a one-on-one summit in Spain. But no such meeting, whether it be an official bilateral summit or a pull-aside meeting, is likely to take place, officials said. A four-way summit between South Korea, Japan, Australia and New Zealand is also unlikely to take place, officials said. Yoon plans to depart for Spain on Monday for the NATO summit set for Wednesday and Thursday. The trip will mark his debut on the multilateral diplomatic stage since taking office last month. South Korea is not a member of the military alliance but has been invited as a partner nation, along with other countries that include Japan, Australia and New Zealand. Yoon is expected to hold a series of bilateral meetings with leaders from Canada, Poland, the Netherlands, Denmark and the Czech Republic to discuss ways to expand economic cooperation, according to his office. /IANS