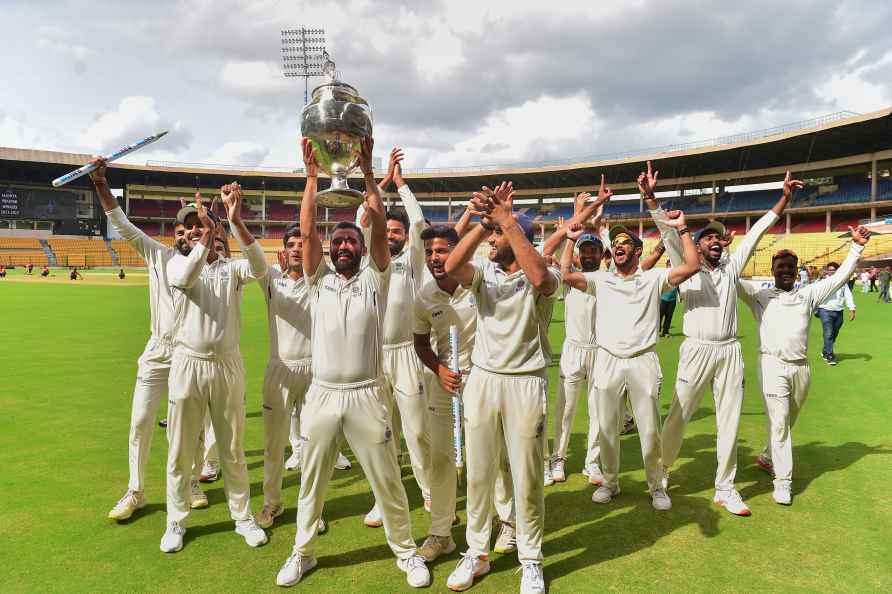 [Bengaluru: Madhya Pradesh's players take the trophy on a victory lap after winning their final Ranji Trophy cricket match against Mumbai, at M Chinnaswamy Stadium in Bengaluru, Sunday, June 26, 2022. ( /PTI] Bengaluru, June 26 : As soon as Rajat Patidar hit the winning runs to seal Madhya Pradesh's first-ever Ranji Trophy title, their head coach Chandrakant Pandit was all smiles. When the Madhya Pradesh players were swarming the field to embrace Patidar, Pandit had tears in his eyes and made a small namaste towards the sky, thanking the Almighty for this moment which he had lost out on as a captain of this side at this venue in 1998/99. That time, in 1998/99, Karnataka had outclassed Madhya Pradesh by 96 runs at the M Chinnaswamy Stadium to lift the Ranji Trophy. Pandit, then as captain of Madhya Pradesh, was in tears on missing out on the trophy despite being in touching distance of it. 23 years later, on Sunday, life indeed came a full circle for Pandit when under his coaching, Madhya Pradesh defeated Mumbai by six wickets to win Ranji Trophy for the first time. This time, tears were out of joy and a smile on Pandit's face as he was lifted by the players on their shoulders. "It is a great memory that I had left 23 years back (he lost the Ranji Trophy final as MP captain in 1998-99) and it is a blessing that I come back here, got it back on the same ground in 2022. I am a bit emotional and winning this trophy was fabulous. Father couldn't do it but son (captain Aditya Shrivastava) did it for MP after 23 years. It is emotional because I missed out as captain on the same ground," said a teary-eyed Pandit to broadcasters after the match. Asked about how the offer of coaching Madhya Pradesh came about, the former India wicketkeeper-batter explained, "It is not a particular reason but I look for a challenging job where the teams are not doing well, there also should be youngsters and to develop that particular state. I used to play for MP and played for them for six years, I knew the culture and the offer which came to me in March, I did not hesitate." "There were a couple of offers but I chose MP because I had left something 23 years back and God willingly brought me back to the same state. Sometimes the talent is there but you need to develop the culture and whatever the game demands I try to inculcate them." Pandit was in praise of Aditya Shrivastava, the Madhya Pradesh skipper and now a Ranji Trophy-winning captain. "Aditya has been an outstanding captain, the plans and strategies we discuss, he was not afraid to implement them on the field. The captain makes the team win 50 percent of the time and he did a fantastic job even though he wasn't getting runs." After being lifted on players' shoulders, in a heart-warming move, Pandit lined up the entire Madhya Pradesh team in a single line and all of them bowed down in front of the camera before taking a lap of honour thanking the crowd. "I owe this trophy to Madhya Pradesh (which he missed out in 1998/99.) I would like to thank all the well wishers, the Madhya Pradesh Cricket Association and Madhavrao Scindia," concluded Pandit, who now has six Ranji Trophy titles as a head coach. /IANS