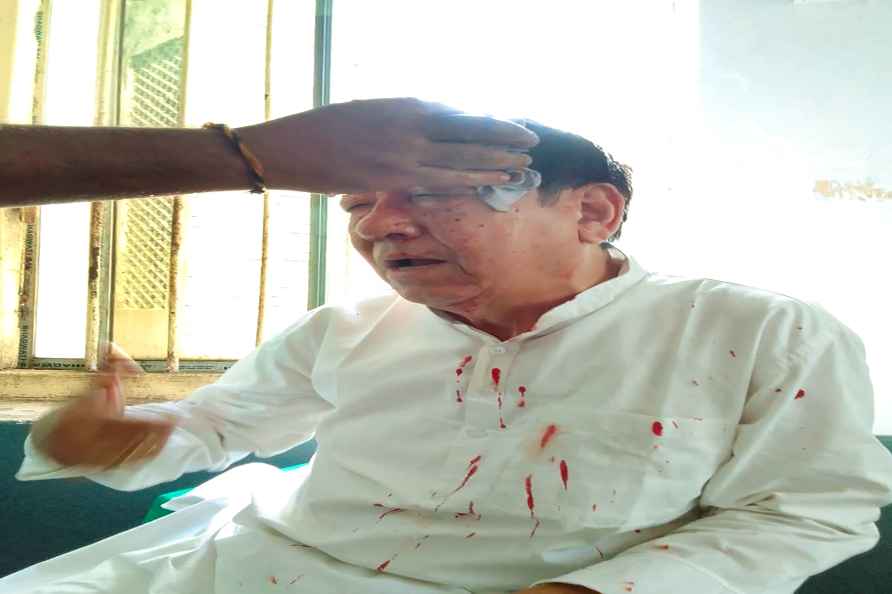 [**EDS: TWITTER IMAGE POSTED BY @INCIndia ON SUNDAY, JUNE 26, 2022** Agartala: Tripura Pradesh Congress Committee President Birajit Sinha receives treatment after allegedly getting injured in clashes that broke out following the win of party candidate Sudip Roy Barman in Tripura Assembly by-elections, in Agartala, Sunday, June 26, 2022. ( /PTI] Agartala, June 26 : The ruling BJP won two seats including that of Chief Minister Manik Saha who has been elected to the state assembly for the first time from Town Bordowali while the opposition Congress won one seat in Tripura, where the bypolls were held on June 23 in the four politically-crucial Assembly constituencies. The BJP is ahead in the fourth seat. According to the Election Commission, Saha, who secured 17,181 votes, won the Town Bordowali seat defeating Congress candidate Asish Kumar Saha by a margin of 6,104 votes. As per the EC, the BJP candidate Malina Debnath won the Jubarajnagar seat defeating her nearest CPI-M rival Sailendra Chandra Nath by a margin of 4,572 votes. BJP nominee Swapna Das (Paul) is leading in Surma (SC) seat over her independent rival Baburam Satnami. In a significant political development, BJP turned Congress leader Sudip Roy Barman retained his Agartala constituency defeating his BJP rival Ashok Sinha by a margin of 3,163 votes. With the victory of Roy Barman, Congress re-entered into the 60-member state assembly after several years. Over 78.58 per cent of the 1,89,032-strong electorate cast their votes on Thursday in the by-elections to four Assembly constituencies in Tripura amid some stray incidents of violence. In all 22 candidates including seven women fought the by-elections. The by-election is being termed by the political pundits as a "semi-final" before the 60-member Assembly's general elections, which is just eight months away. The focus of the by-elections was mainly on the Town Bordowali Assembly constituency where 69-year-old Congress-turned-BJP leader and Chief Minister Manik Saha contested against five other candidates. Saha, BJP's state president and a Rajya Sabha member who assumed office on May 15, a day after Biplab Kumar Deb's resignation from the post of chief minister, contested the election for the first time. To fulfil the constitutional binding, he has to become a member of the Assembly within six months. The bypolls were necessitated after the resignation of three BJP MLAs including former Minister Sudip Roy Barman following the open revolt against Biplab Deb and the death of CPI-M legislator Ramendra Chandra Debnath. /IANS

New Delhi, Aug 11 : Among the Nifty constituents, Maruti Suzuki and Bajaj Auto are the most widely covered stocks on the Street with 54 analysts covering the stocks while Grasim Industries and Bajaj F […]

Fire at a hotel in Gujarat

[New Delhi: In this undated photo, Rifleman Nishant Malik who was injured in a militant attack in J&Ks Rajouri district succumbed to injuries, on Thursday, Aug. 11, 2022. Four army men and two fidayee […]