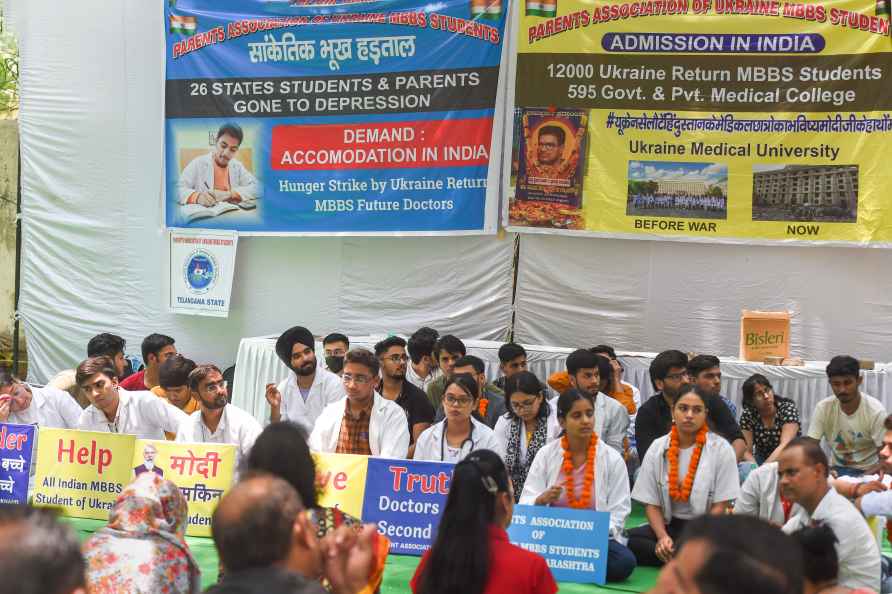 [New Delhi: Parent's Association of Ukraine MBBS Students stages a protest for their demand to accommodate Ukraine return MBBS students in India, at Jantar Mantar, in New Delhi, Sunday, June 26, 2022. ( /PTI] New Delhi, June 26 : Indian students who returned home from Ukraine about three months ago, will sit on a hunger strike along with their parents at Delhi's Jantar Mantar on Sunday so that the Prime Minister looks at their demands and problems. This demonstration will be for one day and 300 people have been allowed by the police. The Parents' Association of Ukraine Medical Students (PAUMS) has made it clear that the students and their families will be on hunger strike on Sunday. "The government is now forcing us to agitate. We have been protesting peacefully till now, but if the government does not pay attention to us, then the families will be forced to commit suicide," it said. Trisha Sagar, who arrived home from Venice, Ukraine, is studying in her second year. "We were brought home under Operation Ganga, we thank the Prime Minister. But if we were to be left like this, then we need not have been called back. If we go to the senior people of the National Medical Commission (NMC) with our demands, they talk inappropriately, we are humiliated," she said. "We were told, 'you don't deserve to study here, you can't become a doctor here. You didn't go to Ukraine asking us.' We would like to ask them whether their permission is needed while going abroad? Would they not know that we are going there for studies? Then why do they misbehave with us?," Trisha questioned. In Ukraine, medical studies are completed in six years. After this, the students have to do one year compulsory internship. Then one year supervised internship is also required to be eligible for Foreign Medical Graduate Exam (FMGE) to practice in India and obtain a license. After that one has to qualify the FMG exam. Ritvik Varshney, who was studying medicine in the fourth year in Kharkiv, Ukraine, told IANS that, "We are now forced to sit on a fast, we are in India for the last three months but so far no decision has been taken from the government's side about our studies. The ministers of the government who had come to receive us had promised that we would ensure your future too." "So far we have not received any kind of news about our future, if the government gives us a stipulated time, then we should feel a little satisfied. But this has not happened. One of our delegations also went to NMC, but there also we didn't get a satisfactory answer," he stated. He added, "Students who have just the last few months of study left suddenly had to return home, then they go into depression. We have already submitted our demands to MLAs, MPs and other officials; we have also protested. But now we are forced to sit on hunger strike." The students and their family members had protested outside the gates of the National Medical Commission central office in Delhi on Friday. Pankaj Dheeraj, national general secretary of PAUMS, said, "We all have been making a demand to the PM for the past two and a half months to provide them future medical education in the country itself, in a peaceful manner. Now the government should take our peaceful protest us seriously." "On Sunday, medical students from across the country are going to start a 'fast' at Jantar Mantar in Delhi. On the PIL in the Supreme Court also, the Central Government has to file a positive and humanitarian response on June 29," he said. He added, "Amidst the Ukraine-Russia war disaster, about three months ago, the students returned home after saving their lives, the government helped to bring them here, but now the government will have to think about their further studies. They will have to be provided medical studies in India itself." The number of students varies in different states of the country -- Delhi has 150 medical students who returned home due to the Ukraine war, Haryana 1,400, Himachal Pradesh 482, Odisha 570, Kerala 3,697, Maharashtra 1,200, Karnataka 760, Uttar Pradesh 2,400, Uttarakhand 280, Bihar 1,050, Gujarat 1,300, Punjab 549, Jharkhand 184 and West Bengal 392. /IANS