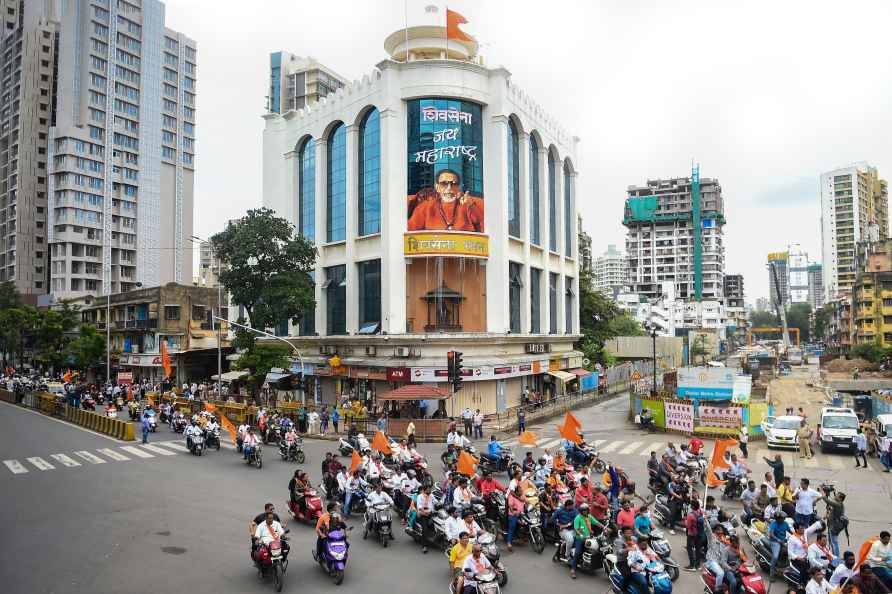 [Mumbai: Shiv Sena supporters during a bike rally in support of Chief Minister of Maharashtra Uddhav Thackeray, outside Shiv Sena Bhavan, Shivaji Park in Mumbai, Sunday, June 26, 2022. ( /PTI] By Quaid Najmi Mumbai, June 26 : As an unsavoury political 'roganjosh' is being vigorously whipped up in Maharashtra for the sixth day, the ruling Maha Vikas Aghadi seems high on 'josh', the rebels group holed up in a Guwahati hotel is worried stiff and the Opposition Bharatiya Janata Party remains starkly wary. After the late Monday night scoot by 37 rebels (40, as per claims) to Gujarat and then Assam, with around 17 now left with the Shiv Sena in Mumbai, the MVA tottered on the brink. It almost appeared that Chief Minister Uddhav Thackeray had decided to hang his boots by vacating his official residence 'Varsha' with family, bags and baggage, returning home to the familiar environs of 'Matoshri' on June 22. Sensing victory, the rebels camp was upbeat and their leader Minister Eknath Shinde patiently pepped up their cause -- and morale -- with daily meetings/speeches, as the Sena-Nationalist Congress Party-Congress indicated they were resigned to their fate... It was only by Friday afternoon that the morose MVA suddenly became chirpy and confident, courtesy a heavy dose of 'Vitamin P' -- the NCP President Sharad Pawar -- probably scaring the living daylights of the rebels and the BJP. The next 48 hours saw the 56-year-old Sena's 'rebirth' -- from a potbellied, slumpy 'tiger' to a lean and mean cat, more of the latter -- as thousands of its activists, men, women youth, trooped onto the streets to support their besieged leader Thackeray and his three-party alliance. In full form, Thackeray giddy-yapped the new-born 'Tiger', and dared the "traitors group" to come to Mumbai, face him and take his resignation, warned them against 'misusing' the name of the Sena founder, the late Balasaheb Thackeray, and asked the rebels to use their own "baap's (father) name" to solicit votes, etc. Buoyed by the Vitamin 'P', Sena MP and Chief Spokesperson Sanjay Raut bounced back with vigor and declared how henceforth it would be difficult for the rebels to move around in their constituencies or face the electorate. While the rebels understood what lay in store for them and extended their Assam stay by a few more days, some over-eager Sainiks in the home-state misunderstood it... and almost like neanderthals, pounded the offices of the deserters in Mumbai, Thane, Pune, Nashik, Satara, Beed, Parbhani, Nagpur and other places. After sacking Shinde as the Shiv Sena Legislature Party leader, the Sena also demanded the disqualification of 16 rebels and Maharashtra Legislative Assembly Deputy Speaker Narhari Zirwal served notices to them seeking detailed replies from all by Monday (June 27). They are: Shinde, Bharat Gogavale, Abdul Sattar, Sandipanrao Bhumre, Prakash Surve, Tanaji Sawant, Mahesh Shinde, Anil Babar, Yamini Jadhav, Sanjay Shirsat, Balaji Kalyankar, Lata Sonawane, Sada Sarvankar, Prakash Abitkar, Sanjay Raimulkar and Ramesh Bornare. With the breakaway faction's Spokesperson Deepak Kesarkar declaring that they would challenge it in the courts, the next battle is likely to be legal and procedural as both sides prepare for a long-haul. Surprisingly, the BJP -- against whom the needle of suspicion points for allegedly masterminding the political upheaval -- looks reluctant to come and grab the centre-stage with the help of the rebels, with no ear-shattering echoes of 'Mee Punha Yaeen', audible on the state political horizon, keeping the Shinde group on the edge. Optimistic of engineering a 'mutiny' among the mutineers group, Raut darkly suggested how "at least 20 MLAs" are in contact with the Sena here from the five-star hotel -- which he compared with the jail-like house of 'Bigg Boss'! The mild-mannered Minister Aditya Thackeray also thundered before a huge crowd late on Saturday slamming the quislings for their treachery to the party and Balasaheb Thackeray's ideals, and almost brought the roof down by promising "the Sena would give more representation to youth and women" in future. Now, under Pawar's sharp-shooter style -- aiming to 'kill' like 007 -- the legal-eagles of the MVA are sharpening their beaks and claws to wrestle it out in the courts or the legislature and save the unique 30-month-old political pilot called MVA at all costs. (Quaid Najmi can be contacted at: q.najmi@ians.in) /IANS