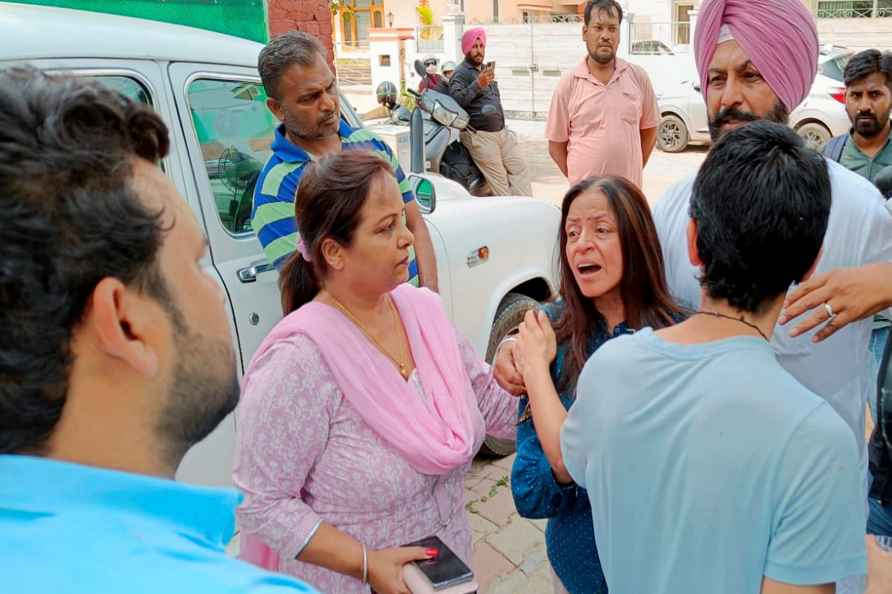 [Chandigarh: Family members react after Kartik Popli, son of arrested IAS officer Sanjay Popli, allegedly committed suicide, in Chandigarh, Saturday, June 25, 2022. ( /PTI] Chandigarh, June 25 : Days after the arrest of Punjab IAS officer Sanjay Popli on bribery charges by the Vigilance Bureau, his only law graduate son Kartik allegedly committed suicide on Saturday at his residence here with his licensed pistol. However, a total 12.5 kg gold, which includes nine gold bricks of one kg each, 3 kg silver and four iPhones were seized from his residence during the search by the Vigilance Bureau in connection with the investigation of the bribery case. At that time Popli was brought in his residence. The victim's mother alleged that Kartik, 27, died of a gunshot wound in the head when a team from the vigilance was present in the house in Sector 11. She alleged that vigilance sleuths shot Kartik. However, the local police said he allegedly shot himself on the first floor of the house after the vigilance team returned after the search operation. The police said they had to open the door of Kartik's room forcefully and rush him to the Post Graduate Institute of Medical Education and Research where he was declared dead. "Kartik shot himself with a licensed weapon. Initial probe shows that he committed suicide," said Senior Superintendent of Police Kuldeep Singh Chahal told the media. The vigilance arrested Popli and his secretary on corruption charges on June 20. Popli's wife told the media that vigilance officials were pressuring them to give false statements. "My 27-year-old son has gone. He was a brilliant lawyer. They have snatched him. I want justice. I will move court," she alleged, showing blood spots of her son on her hands. Earlier, the vigilance team had seized a huge cache of cartridges from the residence of Popli, who was posted as the Director (Pensions), Punjab. As per the first information report, Popli allegedly sought one per cent commission from a contractor of a Rs 7 crore sewerage project in the Nawanshahr town during the previous Congress regime. The contractor paid Rs 3.5 lakh through Sanjeev Vats, a Superintendent-level official posted as secretary to the officer, who was heading the Water Supply and Sewerage Board, on January 12. The vigilance said Popli was seeking the remaining Rs 3.5 lakh from the contractor, who recorded his phone calls and complained on the anti-corruption helpline set up by the present Aam Aadmi Party (AAP) government. /IANS

Jharkhand-based advocate arrested in Kolkata with Rs 50L in cash

Kolkata, Aug 1 : A Jharkhand-based advocate was arrested from a shopping mall in Kolkata with Rs 50 lakhs in cash. The accused has been identified as Rajiv Kumar. A statement issued by the […]