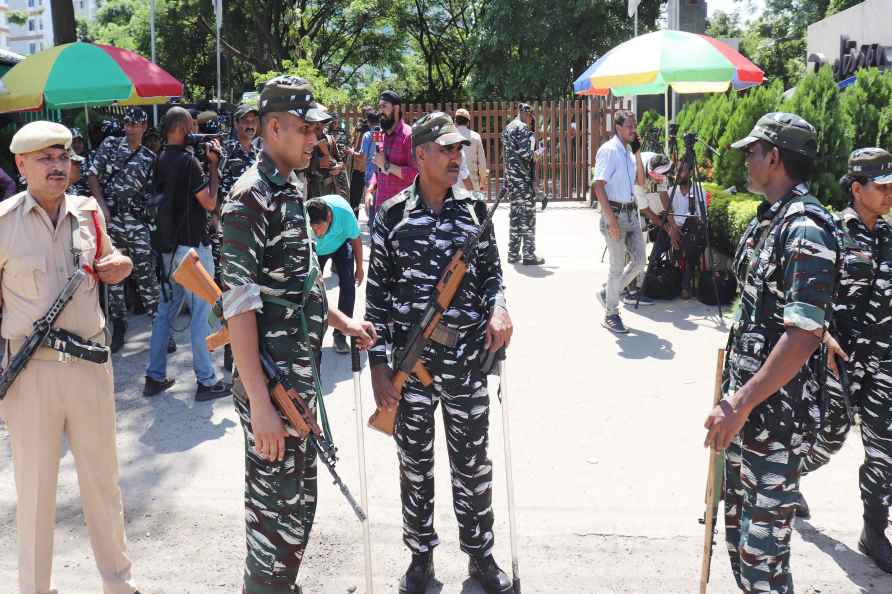 [Guwahati: Security personnel outside the hotel where Shiv Sena leader Eknath Shinde along with other rebel Shiv Sena MLAs is staying, in Guwahati, Saturday, June 25, 2022. ( /PTI] Mumbai, June 25 : As pressures grew on the Shiv Sena and the rebel faction, both sides appeared set for a long-haul with legislative procedures and a possible legal battle likely to enter the play on day five of the Maharashtra political crisis here on Saturday. Amid the mounting crunch, the rebel group leader Minister Eknath Shinde has reportedly told his supporters in Guwahati that a new government will be installed in 96 hours and urged patience. In Mumbai, Sena Chief Spokesperson and MP Sanjay Raut on Saturday renewed his appeal to the mutineers saying "its still not too late, come back for talks". Raut said the Sena workers are getting restless and asking "what do we do" and expressed apprehensions that the situation may go out of control if the activists flare up, urging the rebels to return for negotiations. Gripped by uncertainties plaguing the fate of the Maha Vikas Aghadi (MVA) government of Sena-Nationalist Congress Party-Congress, stray incidents of violence from different parts of the state were reported on the homes and offices of some revolters by alleged Sainiks. The Shinde group late on Friday night accused the Chief Minister Uddhav Thackeray of yanking off the security provided to the homes and families and offices of some of the MLAs on their side. In a letter to the Chief Minister, Home Minister Dilip Walse-Patil, Director-General of Police Rajnish Seth and all police commissioners in the state, released on Saturday morning, Shinde complained of "malicious withdrawal of security of family members of at least 16 MLAs on his side. In response, Walse-Patil stoutly denied Shinde's allegations as false and misleading and asserted that nobody's security was withdrawn. Both the Sena and the rebels await the stance of the opposition Bharatiya Janata Party (BJP) which has officially shrugged, claiming it is not interested in toppling the (MVA) government but cannot help if it crashes owing to internal contradictions. Nevertheless, the Sena-NCP-Congress have pointed accusing fingers at the BJP for fomenting the crisis and making all efforts to dislodge the MVA since the past 30 months. Presently, the Shinde camp has claimed the support of around 40 rebel MLAs plus a dozen independents, smaller parties and at least two Sena MPs. The Sena side is left with around 17 MLAs and top party leaders claim "more than half the rebels in Guwahati are in touch" with them. /IANS

Statewide protest in Gujarat against 18% GST on 'garba'
[Surat: Aam Aadmi Party (AAP) workers stage a protest against the state government over imposing of GST on commercial garba's entry passes, in Surat,